It'd been some time since the Sake festival Asahi thought as he finished setting up his makeshift desk. On it was littered with envelopes full of ryo. Nest to the desk a large contraption that one of the Yuki's had rigged up for him. The insides containing a large amount of crushed ice, and on the side a variety of fruit juices to mix into it. He had loved seeing how happy the Sake Festival had made everyone, and with his recent job he wanted to make sure that continued to happen. With this in mind he had sent out several letters to members of the militia, as well as other properly important infrastructure folks.

His plan was to not only provide a boost to the economy by in fluxing some cash, but also make sure moral stayed at an all time high. Crunching the numbers he had decided on an amount, and was now prepared to put that money where his mouth was. Besides he thought, a large portion of the village funds had now been donated by no one else but himself.


(All Tanbogakure shinobi are welcome to post here. Please simply provide links and proof to having done 2k word count between now and May 27th. Once you provide this proof you are entitled to a one time payment of 15k ryo from the village funds and a snow cone. Thanks!)

Survived 2021
You've completed the Christmas Event of 2021 and qualified for the last reward, by partisan you are awarded this fancy badge!
Ryo : 205150

Entering the Castle on this day felt miles different from the last time she set foot in the building, on that day she had been looking for respite from phantom pursuers - now she walked in as a completely different woman. It had been months of silence and that silence has changed her perspective on her request. Was it fair to harbor her status and relinquish that responsibility onto a people who never asked for it? Was it just to sit idly by and wake every morning to a mundane existence and feel safeguarded by the walls she called her home now? No. The guilt of it all was eating her already inhuman body from the inside. She survived this long for the sake of a legacy created by a man she never knew, by a clan she was never held to the breast of… and who had she become in that process?


She woke with such aching thirst that it was unnerving, she grimaced at company that wasn’t of ‘her’ kind due to the noise, she despised the half life she had been cursed with. Had the madness of war and blood worn off or had she finally had the sense of clarity she once felt in her early years before the change? There is no definite way to answer any of these questions as even she grappled with the clarification she yearned for in every waking moment. Without a bloodthirsty goal she was a shell of a being - not even a person, a being.


It was these thoughts that brought her up from her bed, through her dressing arrangements, and her feet moving toward the castle she visited once before. This occurrence though she was masked in a shroud of unorthodox methods - in the passing months she had been actively concealing her chakra and appearance through her own technique called Noppera-bō, an unearthly jutsu that made the user into a faceless ghost; able to replicate the look and chakra of the person she chose - and the person chosen was Souji Hyuuga. At first she chose it to look her biggest mistake in the face… but it soon morphed into a security blanket. Even in the blanket of the jutsu she could lie to herself in the glances at reflections that he wasn’t lost to her; a fool's errands.

As she, masked as a young man, knocked on the door to the sitting kage’s office she heard the thrills of heart beats around her - the sickening sound of life she once knew. In the devastatingly familiar voice she spoke out, “May I enter?” In the end, this meeting had a purpose in the end of course, and she was sure to make good on that decision, no matter how odd the outward appearance may be.

Having just waved by to two genin, Asahi busied himself with refilling the flavorings for the snow cone machine.  It was a fantastical device after all.  Looking at some of the flavors though he couldn’t help but think they were a touch morbid.  After all who really had a craving for tigers blood?  Such a strange name for a flavor like strawberry.  What was wrong with just….strawberry?

A knocking at the door caused him to jump as he’d been in his flavor revere.  “Yes come in!”  He’d say cheerily.  He’d move so as to greet the newcomer, as the young man entered the room he would wave his hands at the snow cone machine.  “Please feel free to have some!  Now serving…ummmm.”  He reviewed the two bottles of syrup “tigers blood and…..konoha apple….”  His voice was uncertain but quickly his smile recovered.  Looking at the young man, he couldn’t say he recognized him.  “Sorry I’m afraid I don’t know you, but I’m still getting used to this all after all.  Name, rank, and mission log and I can get you some money, while you get a snow cone!”  He’d smile, and move to the desk waiting for an answer.

Survived 2021
You've completed the Christmas Event of 2021 and qualified for the last reward, by partisan you are awarded this fancy badge!
Ryo : 205150

Snow cones, the odd sight alone brought a reluctant smile to the face of the masked woman, showing instead on the face of a boy who had haughty features making the smile come out more like a smirk. “I’m alright actually, I’ll pass on the snow cone.” Her eyes would gaze around the room in a sweeping manner - the heartbeat of only the newest Kage audible. This wasn’t the time or place to have the conversation she wanted to have with him but it was as good as any to set it up. Though she had been asked some troubling questions to start, “Souji Hyuuga, D rank and I don’t have any missions as of now to speak of, though I do come bearing a gift and a request in the same breath.”


The man had moved to his desk, friendly and open - a flash of herself moving around her own previous desk in a similar fashion spliced with a near identical memory of her doing it in a very predatory manner. This was not the time to have a mental episode, gritting her teeth for a moment she would step toward the desk, withdrawing her money pouch and withdrawing 80,000 ryo. Flipping through the bills for a moment she set them down and glanced back up at him. “This is a donation to the village treasury, with my only request being that you meet me once more at the restored shrine overlooking the bay.” With a slight bow of her head she took her leave without another word.

As the man spoke, he looked a little crest fallen.  No one had really made any mention or attempt to take any snow cones.  Truly a tragedy.  As they finished with a name his own head would move down, scanning over the roster.  Unsure of the name, but with so many new faces it was hardly impossible to imagine he'd miss one.

Without being able to find one he, he would begin to doublecheck.  Hardly noticing the large stack of money that had been placed down, and merely said "O yes of course, no problem.  I'm free tomorrow late afternoon" before looking up.  He had just enough time to see him leave.  Gasping at the money, he would run out in an attempt to return it, however the hallway was empty.

Scratching his head, he returned to the room.  Stashing the money in his robes, determined to attempt to return it at their meeting. 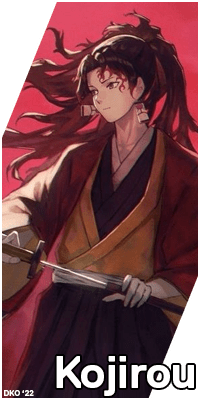 Survived 2021
You've completed the Christmas Event of 2021 and qualified for the last reward, by partisan you are awarded this fancy badge!
Ryo : 24500