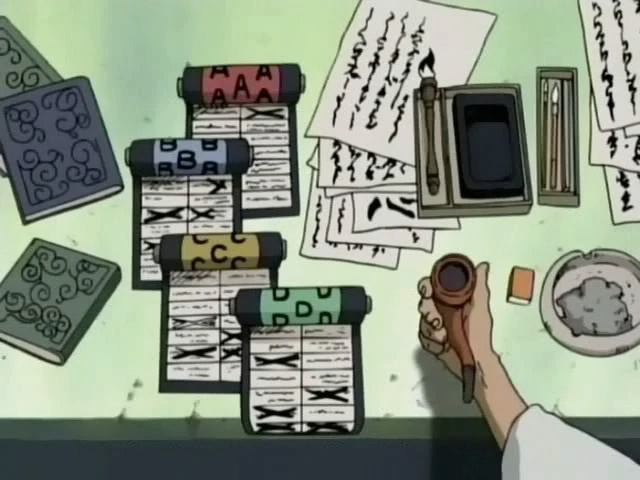 Ninja Rule #4: A Shinobi must always put the mission first
Missions are an integral part of the experience here on NRPG. They are the easiest way for players to earn Ryo, AP, crafting items, and, most importantly, rank-ups. This guide will breakdown how missions work on the site.
Table of Contents
Helpful Links
Overview
The Mission Board
Mission Location
Mission Types
Basic Mission Rules
Mission Ranks
Word Counts and Rewards
Challenges
Hunter Missions
Hunter NPCs
Ambushes
Village Sentinels
Milestones 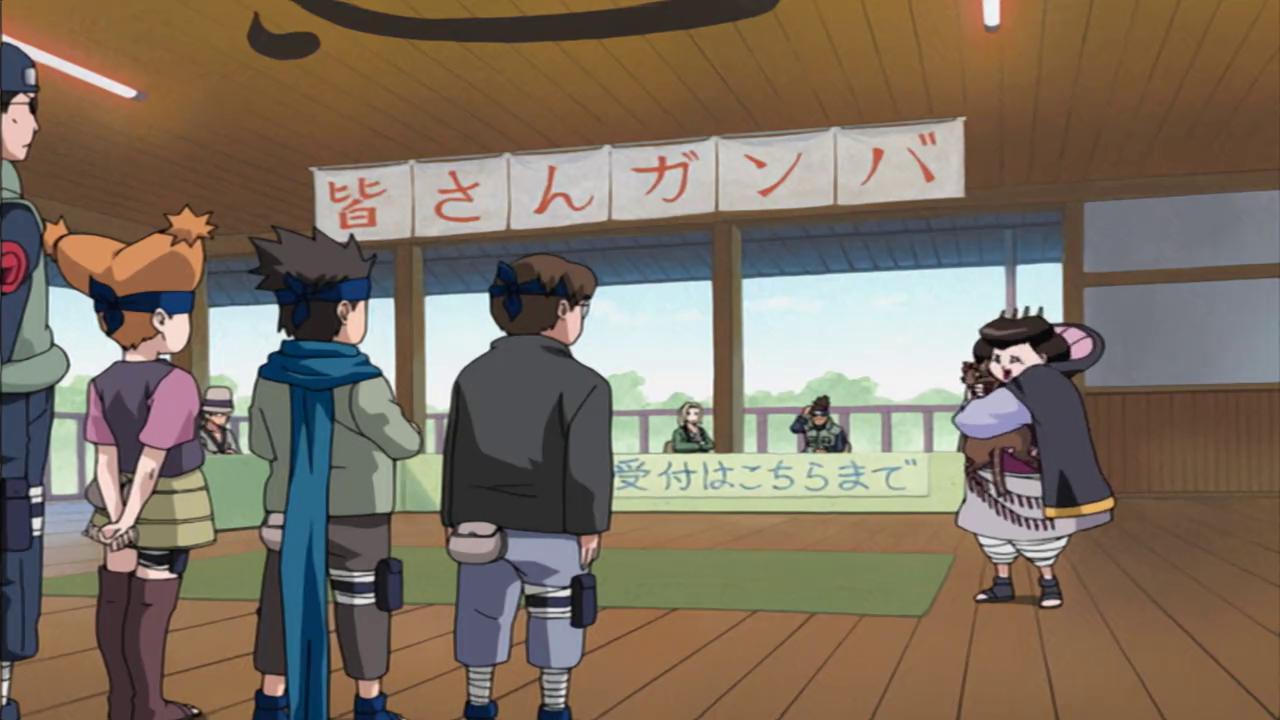 The Mission Board
The Mission Board is the one-stop-shop for finding approved missions, claiming rewards, and requesting new missions. The mission board is divided in several sections, as follows:
Mission Directory: Regardless of type, approved missions will be listed and organized here. Members of NRPG Staff will periodically update this page.
Mission Requests: Players can create new missions that can be approved by NRPG staff. Players CANNOT complete missions in this section. All new missions must follow the Mission Creation Guidelines and Template.
Mission Rewards: Each ninja must create a thread here to track their completed missions and what rewards they have earned. Refer to the Mission Rewards Template to create one.
Milestones
Mission Types
Missions on the Mission Board are divided into three major types:

Mission Location
All Missions are required to have mission location on their mission details. Mission threads must made in the mission location listed but some missions may have vague locations. Here is a breakdown what those locations mean:
Return to Table of Contents
Mission Ranks
Missions are divided into ranks based on their difficultly. A player's In-Character Rank determines what mission ranks are available for them to start. Below is a breakdown of the ranking system:

* - Missing Ninja are allowed to complete Village Exclusive missions If they have Kage permission .In this case they would be treated as mercenaries used to complete tasks the village's don't have the manpower to do themselves.
Ranking Up with Missions
Missions are the most common way players can increase their OOC/Power Rank, starting from C-Rank all the way to S-Rank. There are three distinct tracks that players can follow through missions. For a full breakdown of Rank Ups, please refer to the Dual Rank System.
Return to Table of Contents 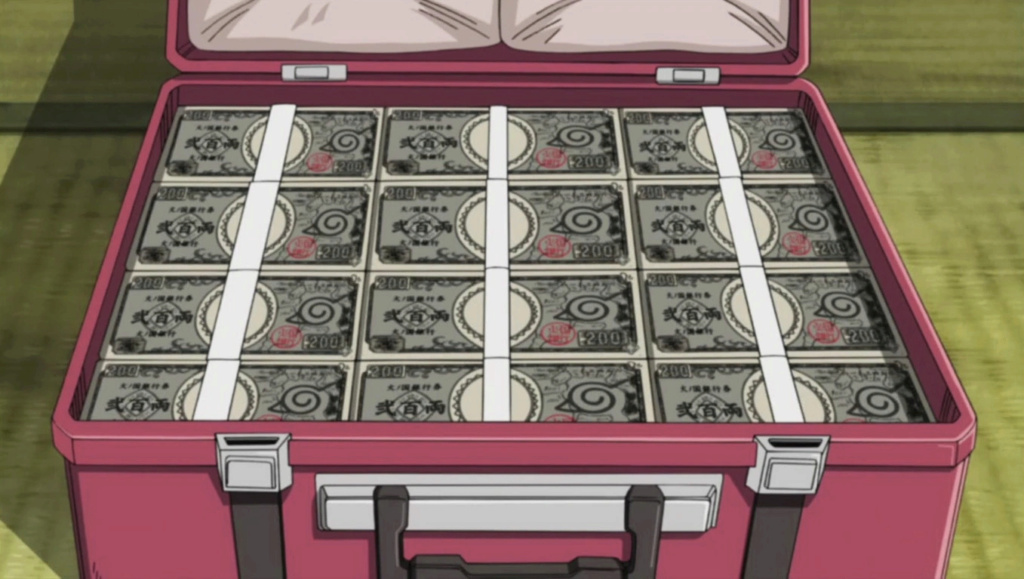 Word Counts and Rewards
The Word Count Requirement and their Reward is dependent on the rank of the mission being completed. All missions reward a certain amount of Ryo and AP for their completion. Each member of a mission group earns the same rewards, and players do not earn more rewards for exceeding the WC requirement. The breakdown is as follows (WC / Ryo / AP) :
These are the standard amounts for all missions. They cannot be modified unless the mission has a Challenge.

* - S Rank missions are the highest-ranked missions a ninja can undertake. The ranges displayed are adjusted based on the difficulty of the task.
** - Players that have reached MAX AP on their ninja no longer benefit from AP Rewards. To compensate, these players can convert their AP to Ryo. The conversion rate is 1 AP = 50 Ryo. Only players with MAX AP are allowed to do this and can be done at any mission rank.
Mission Salaries
Each ninja may receive additional Ryo based on their In-Character Rank and the rank of the mission they complete. This salary is not reflected in the mission details and each player must make sure they are adding it to their claims correctly. NRPG Staff will monitor this for abuse.
Here is that breakdown (Refer to The Dual Rank System):
Return to Table of Contents
Challenges
Challenges are modifiers that increase the difficulty of the mission. Some missions may have multiple challenges combined for a challenging quest. In most cases, these missions will either add more to the word count requirement, have a remote mission location, limit the size of a mission group, or combine all three. Completing a challenge adds a bonus to its Reward. This section outlines the different challenges missions may have:
Arc: A chain of missions that are thread together to make a common narrative.
Covert: Missions that limit the number of players that can make up the mission group. Only the mission group members and their village's Kage know the details of the mission.


Crafting: Missions that reward a material from the Crafting System.


Hunter: A special type of mission that requires the mission group to fight and defeat a Non-Playable Character (NPC) in combat to be completed.

Long Distance: Missions with a remote Mission Location such as minor villages or the Land of Iron.

Professional: Requires a member of the mission group to have a certain specialty.

Sabotage: Missions whose Mission location is inside a Rival Nation's country meant to cause havoc to other villages. These are meant to be the most difficult of all the non combat challenges.


Technique Acquisition: Missions whose Ryo reward is reduced but replaced with being able to learn a specific technique.


All missions with challenges will recalculate the adjustments they make and showing the correct Word Count Requirement and Rewards. If the calculated amount is not a whole number (as is the case with some AP calculations), that number is rounded up to the next whole number.
A mission with multiple challenges uses the base amounts for all modifiers. For Example: If a B Rank Mission (3,000 WC / 6000 Ryo / 30 AP) were both Professional and Covert, then the new amounts would be 3,600 WC / 12,000 Ryo / 45 AP.
Return to Table of Contents 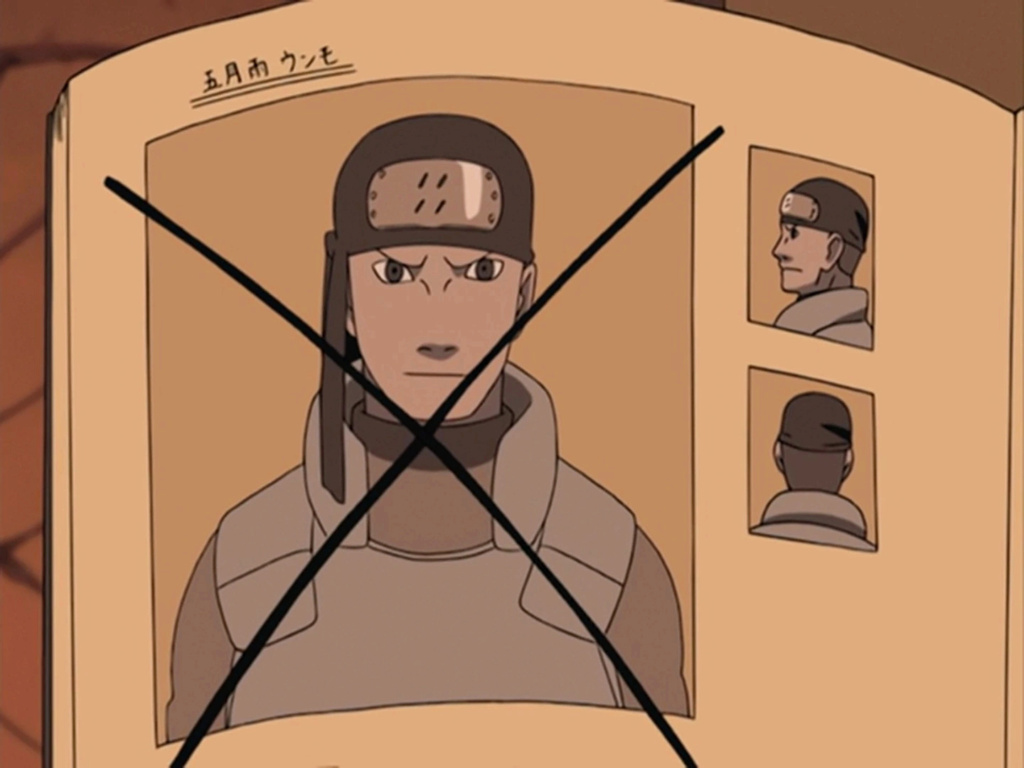 Hunter Missions
Hunter missions are dangerous and may quite likely result in a player's DEATH. However, with great risk come great reward, and those who complete a hunter mission will earn a Bounty: a powerful reward chosen by the player that improves the higher the rank of the hunter mission.
For a player to participate in a Hunter Mission, their character's Power Rank must be at a maximum of 2 ranks above the Hunter mission. For example: for a D-rank Hunter, only B-rank characters and below can participate. Note: This is not the case for Arc style Hunter Missions.
When completing a hunter mission, each member of the mission group may choose one of the corresponding Bounty options. Below is a brief description of the ranks of hunter missions and their Bounty choices:
D and C Rank: Bandits, vagrants, and low-threat ninja that cause small-scale havoc to villages.

B and A Rank: Crime Lords, Rebel Leaders, and Mid-threat Ninja that can cause massive damage to villages and peoples.

* - Not all NPCs will be a clan member so this choice may not be available for all hunter missions.
** - Only two players within a ninja group can chose this Bounty reward. Only one dojutsu eye is earned by choosing this Bounty.
*** - Items received by this bounty are valued based on their current selling price and any unspent funds is given to the player as Ryo. For Example: A player selects 3000 ryo worth of items on a D-C Rank Hunter mission, they will receive 2000 additional ryo).
**** - Only one player within a ninja group can choose this bounty. Other group members may choose organic material for transplants as their bounty which may lessen the value of the corpse. Regardless, the player who chooses this bounty will always be able to use the body for human puppets/DNA for Edo Tensei summons.
Return to Table of Contents
Hunter NPCs
A full breakdown of NPCs can be found on the Mission NPC Guidelines page. Here is a general overview of how NPCs work during Hunter Missions.
Return to Table of Contents 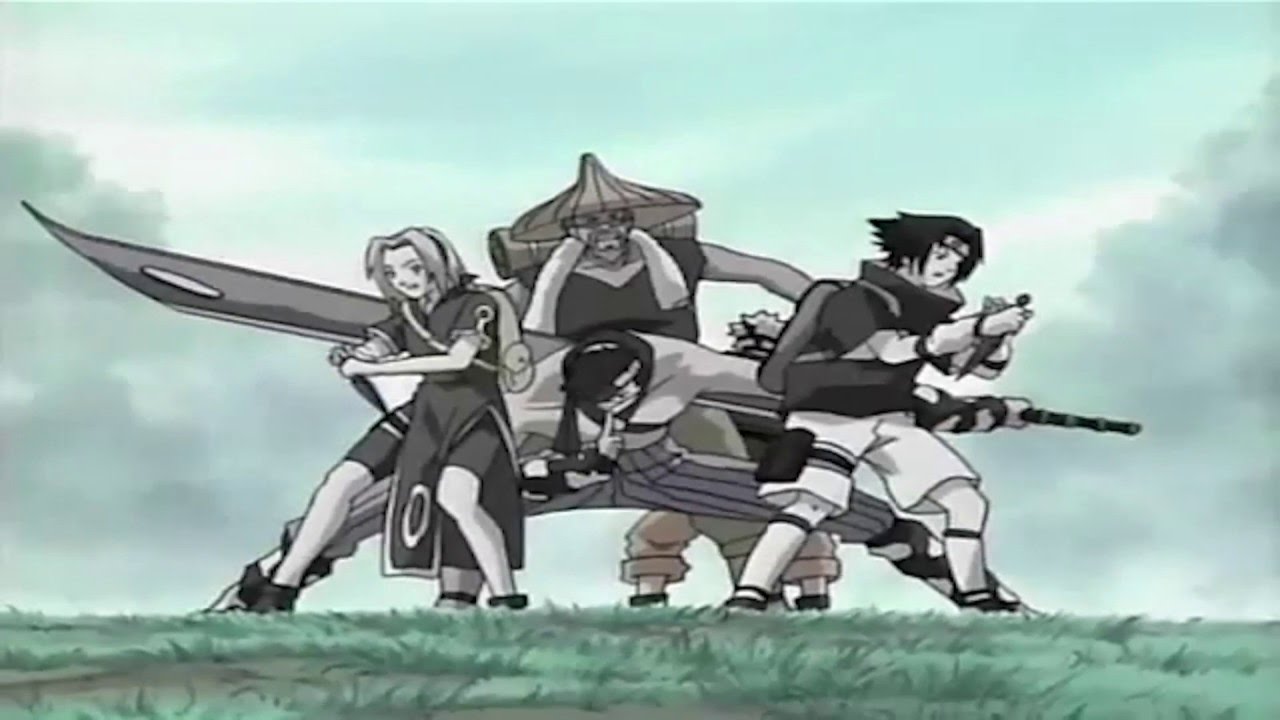 Ambushes
Not all missions are danger-free and Rival ninja (Especially missing ninja) may attempt to Ambush a mission group to stop them from completing the task. In some instances, a simple mission at a nation's borders could lead to combat against a squad of the rival ninja; this combat could lead to player DEATH.
Not all missions can be Ambushed, and some requirements must be met to do so:
Once these requirements are met, an Ambush can be attempted. Here's how it works:

Should the mission group escape:


Should the mission group stay:


Any Ryo taken by the ambush group credits them towards completing the Bandit track towards ranking up.
Return to Table of Contents 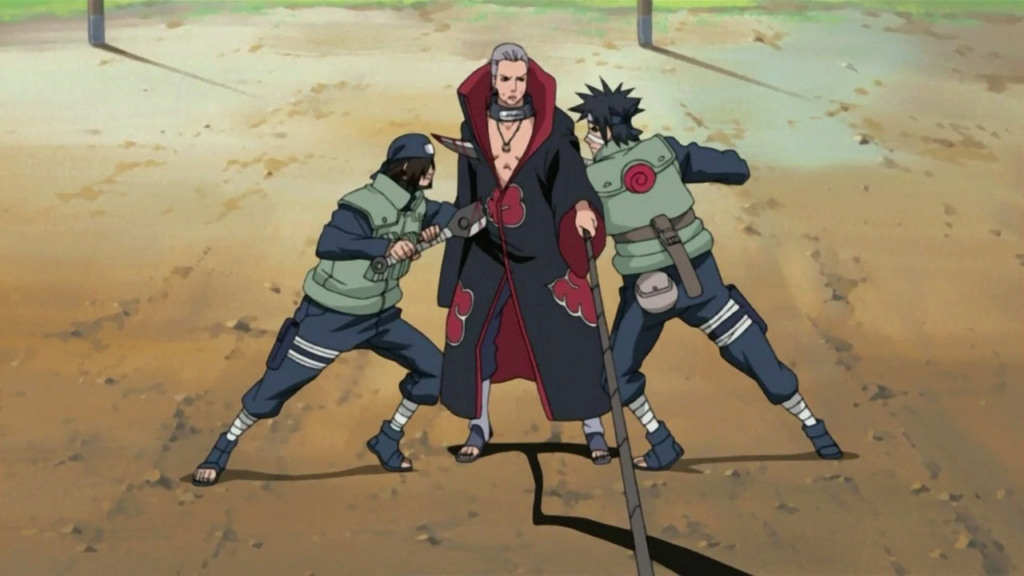 Editors: @Ayato Hyuuga , @Murata - Without you guys this would never have been completed at the level it is.
Contributions by:
@Satoru Jugo - Who showed me several different coding tricks
@Murata - Who made more missions than I thought possible
@Mizuki Ohta - Who helped develop the finishing touches
Other Staff Members at time of launch (Not mentioned Above):
Admin -  @Ibari , @Kenshin
Full Mod - @Zaine
Other Mods: @Gonk, @Ichigo Sato,  @Souji ,  @Kita Hajime , @Daiko,  @Ryuzaki

Milestones
Milestones are achievements that award a One-Time Bonus. To reiterate, Milestones' bonus rewards can only be claimed once per ninja and will be monitored by NRPG staff for abuse but it  is possible for one completed mission to complete multiple Milestones.
All Milestones must be claimed on the ninja's Mission Rewards page. To claim, the player must get approval from a member of NRPG staff before using the rewards associated with it. A section of the ninja's mission reward's page is dedicated to keeping track of what milestones that ninja has earned.
NOTE: Players DO NOT receive credits for missions that they earned from the legacy system. However, to compensate for their hard work refer to The Legacy Mission Compensation Program!

Below is the list of achievable milestones. Be sure to check back periodically to see if any new milestones have been added!:
Hit the Ground Running: Complete one mission.
Bonus: 500 Ryo

Teamwork makes the Dream Work: Complete a mission in a mission group of 3 or more.
Bonus: 500 WC

Please refer to Mythical Items Guidelines and Directory for a full breakdown of mythical items and their effects.
Return to Table of Contents