Let's Fvcking do it [Protest] 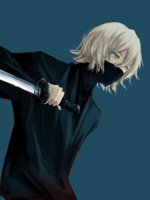 These eyes see more than lies
No reason to Hafuma spoke mercy on Gael behalf and it seemed he would get it at least since Maki had stopped attempting to throw him around like a rag-doll, so with that part of the business done there was the topic of who would be the next kage, and the status of Lady Murata, the current kage that seemed to be missing. Hafuma himself was just offered the position and he felt greatly honored to even be considered among two jounin, he was poised to accept it as well, that was until Maki an anbu level shinobi of the village came.

In his heart, he still wanted the position but he knew just like the jounin he wasn't the most suitable for it, at least not now with Maki apperance, he could object but then why would he do that? Maki was obviously the best choice now. "I have no objections, I could tell other shinobi about how I did a mission with the Kage back in the day heh. But as I did to Lady Murata I offer my eyes, my blade, my everything to the protection of the village of Kirigakure. I, Hafuma Pendragon of "House Aurum" swear my loyalty to the new Kage." Hafuma spoke as he walked towards Maki, taking one knee as he did the rat and dog hand sign, summoning his two blank tanto laying them in front of him on the floor as he took a personal Pendragon pledge, the knight's pledge of his family.

"Oh and one  more thing, I have come upon a scroll in the library that was restricted and I need the Kage permission to learn, may I have you're permission as the new kage? The scroll mentions "Salt Release" a more advanced nature of earth. "

With that Hafuma would collect his things and move back, if Maki or anyone else had anything to say to him he would stay and listen but if not he would leave the three jounin to discuss the future as they pleased.

The shaggy haired Jounin looked at the group for a moment and instead of standing around he went to take a seat in one of the free couches and brought his hands together, each fingertip pressing against each other gently as he spoke," Not much else to dote on given the situation. I'm new here, he just got back and that just leave our lovely Chuunin here. Until Murata gets back your the best shot the village has at stability. If Murata trusted you enough to label you as an ANBU operative, then I trust her decision. Just don't betray the trust of those in this room... and those of the village and we have absolutely no problems," that was his two cents of the matter as he took in a drag of the cigarette that had still been placed firmly between the corners of his lips.

Gonk
Citizen
Survived 2021
You've completed the Christmas Event of 2021 and qualified for the last reward, by partisan you are awarded this fancy badge!
Ryo : 151400

The ANBU agent blinked in surprise when Hafuma got down on one knee and gave an oath of loyalty to Gonk. It was a weird feeling to see someone showing that much respect to him, so Gonk just nodded and gestured for Hafuma to stand when he finished his pledge. The chuunin’s next question reminded Gonk of a new responsibility he had as Kage: managing restricted techniques. He had no knowledge of the element Hafuma wanted to learn, but he trusted the boy.

“Of course,” Gonk told Hafuma. “I’m not skilled in earth release so I wouldn’t be able to help you, but I’ll be curious to see what kind of powers this element grants.”
Gonk heard a knock at the door, and Chizu entered the room.

“You requested me agent Mako?” The elderly lady asked.

“Yes, I did, one moment,” Gonk replied before turning to the other shinobi in the room. “I appreciate your support, but I’d like to speak with Chizu in private for a moment. Assuming the two were left alone, Gonk would turn back to Chizu and explain to her what happened.
“So all of this to ask, do you know if Murata’s coming back?” Gonk inquired once he finished recounting the story.

“Gonk, take off your mask for a moment,” Chizu told him, a sad look already starting to creep across her face. Slowly, Gonk brought his hand up to his face and removed the shark face that covered his actual shark-like features. “I’m afraid that lady Murata doesn’t plan on coming back. I’m not sure where she’s gone, but she’s doing what’s best for her.”

“I see,” Gonk said as he looked at the ground and tried to suppress the emotions that started welling up.

“I know she was like an older sister to you,” lady Chizu said, putting a hand on Gonk’s shoulder, “and I’m sure she still cares about you. But your paths simply had to part.”

“Yeah, maybe you’re right,” Gonk said as he slowly raised his head and looked at Chizu. “But what do you think we should do about the Kage situation?”

Gonk slowly nodded and turned to the desk. As he gazed down at the hat, his memories of the village flashed through his mind. Then he made the decision that would not only alter his life, but the future of the village and all of its inhabitants. Gonk picked up the blue kage hat, and placed it on his head.

“I suppose my first order of business will have to be getting that one locked up,” Gonk sighed. He didn’t want to exercise any of his new power quite yet, so he created a shadow clone in his ANBU attire and had them bring the genin to the prison. Someone else could question him more later.

Gonk sat down in the chair and began pondering how to run the village. It was a lot for a mere 15 year old, but the new Mizukage would do his best to fill the large shoe’s left behind by his predecessors.

Shikami would nod to Gonk as he requested to speak with the lady alone "Very Well Sire, If you need me for anything, just summon" And with that Shikami would head out just as he had been requested to do , Shikami would head home and upon getting home he would first clean up all the dust from a years absence, and he would begin to formulate a plan as to how he could give back to the village, missions was one way, and another would be to sign up to help at the academy, and even taking on a role as a mentor to future shinobi. It would be quite a while before Shikami would go looking for answers again.