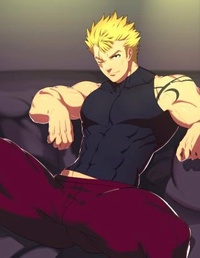 Cole had spent all night thinking about how to get to the next step in his training. He was sure that he was ready for his next element but he needed someone to train him in how to use it. He had already learned how to use lighting release chakra, but he needed wind release chakra in order to use his clan’s thunder release. For this reason, he had decided that he would go down to the training grounds and see if he would be able to find someone willing to teach him wind release. Sliding on his boots as he walked out the door Cole would be wearing his normal training gear. A skin-tight black tank top showing off his abs and some loose-fitting red jogging pants with duel white stripes running down the legs. Walking outside his eyes was assaulted by the sun, but with a quick turn of his head, he was all good to start walking down the street. Sliding his headphones on he started to listen to music his head bobbing with the beat and could be caught muttering the lyrics.


When he got to the training grounds the sun was high in the sky putting it around noon, and the heat was hitting the high point for the day and it wasn’t hard to notice it was going to be a scorcher. Cole walked over to the shade tree towards the middle of the field and looked around he could see a few other people out training but didn’t want to interrupt anyone. For this reason, he decided to lean against the tree listening to his music while waiting to see if anyone would use a wind-style jutsu. After a few minutes, he got bored and started to work out a bit using gravity as his weight. Climbing up into the tree he would hang upside down and do situps this way he would be able to see everyone. After a rep of situps, he would slide down landing on his hands using the same tree branch for support for vertical pushups, before switching back.