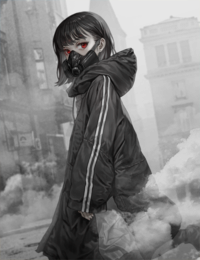 The door swings open the usual slow creaking replaced with a fast and sudden shriek of old wood. There stands Haru with her oversized jacket Billowing around her body as the wind rushes past her. The winds were surprisingly strong today. Haru had to fight against it to get here. She pushes the door closed by pressing her back against it. The wind whistles through cracks in the walls and the building groan as if in pain. She takes a moment to clear her mind. She has some work to do today and judging by the storm outside much more to do afterward.

This is Haru's Home. It's one of the cheapest places in the village that can be rented and meet the bare requirements of shelter. It's cold, has holes, and the electricity is hit or miss. Many of these problems come to a head during storms which are precisely why Haru goes on walks on days like this. She has come a little too close to being electrocuted in the past. The Building is small it has a bathroom, a kitchen with what one can consider a living room connected, and a small room which she uses as a bedroom, Complete with a futon and anatomy posters. There is one detail that gave Haru a special interest in this place over others besides the strange strain of mold that grows behind the toilet and that is the basement. A  surprisingly deep one at that.

Haru sits in front of the entrance for a moment staring at the peeling wallpaper across from her before closing the door behind her. She does it slowly and in small increments. She hates the creaking sound it makes and would hate the sound of it slamming even more. Once the door is shut as quietly as possible she heads immediately towards the door which leads to the basement. she opens and closes this one the same way she does all the other creaky old doors in her home. She cant wait to replace them one day once she gets enough money from her job as a shinobi. Harus's empty gaze drifts down the long dark stairs. She begins the descent, behind her the fading sound of water dripping into half-full buckets and whistling wind.

The light has faded. it is too dark to see. This for Haru though is of no concern. She has long since memorized the steps. She knows this place by heart. it is a long walk, to some it might feel like an eternity walking ever downwards in pitch black. Sounds fade, Cold Grows and seeps deep into your skin. however, Haru knows that is nonsense though, if infinite stairs did exist they certainly wouldn't magically appear in her home. She reaches the basement. with a click, the lights come on accompanied by a faint hum that Haru finds rather irritating. Though she needs to see for these next parts so it's acceptable for now.

Her basement doesn't look that bad for a basement. The lights don't work properly all the time so they flicker and blink. Even when they are on they are faint and don't cover everything very well. They tinge the stone room with a sickly yellow. this might have been some kind of shelter or panic room in the past. It was mostly empty when Haru got it. Just stone and brick but Haru has added some things to make it her study. A wooden crate contains what little remains of her medical book collection. She used to own many but they have been lost when her family removed her from her old home. Posters and Infographics hang nailed to walls detailing human and animal anatomy and medical practice. Two tables sit in the room on opposite ends of each other. One of metal and another of wood. The wooden table has notes, More posters. Vials and Beakers, and in the center Harus Leather-bound Journal which contains her thoughts and Ideas. The Metal Table sits pressed against the wall at the end slightly obscured by shadow as the light strains to reach the ends of the room. It's covered in a sheet of plastic though through it you can see it has spots of blood. Which also seem to lie scattered on the ground near the table. Dull surgical instruments lie there surprisingly clean though a few more Operations from being unusable. ; Those were never meant to be used on living tissue; Haru thinks staring at them vacant for a moment. ;; I'm going to need replacements ;;.

In the corner of the room, a cage sits a raspy breath brings Haru's attention to it. there lies a brown lizard. it is about 5in long and has a spiky look to it. Its breathing is heavy and labored. visible in its rapidly expanding and contracting chest. It lays with its body tilted to one side. On the side up you can see a damaged hind leg. It is badly bruised and potentially has a broken bone. Haru looks at the creature from where she stands. Eye focused on the leg then it slides over the rest of the creature's visage imagining bone, organ, and muscle. Its struggle will end soon.

Haru grabs some books from her crate and sits at her wooden study table. they are basic texts on the most fundamental and rudimentary basics of medical practice some of which she just never returned to the ninja academy. She has known most of this, though she needs practice. She is a shinobi now which means she needs to utilize her chakra to do these things. She spends hours lost in those texts reading about basic medical techniques she needs she decides on the few she will be working towards for the next few days now that she has a subject to test them on.

After hours of reading and writing notes Haru understands the basic working of medical-nin but to put them into practice will be another story. She stands and walks over to the caged Lizard. As she reaches her hand into the small horned creature takes some strained steps back but cannot escape her reach she lifts it out of its confinement. There in her palm, she gazes over its vulnerable body, its small legs waving in the air to no avail. Haru's cold gaze looks down at the pitiful thing and she begins to think. ;; Does it fear me? Is it because I am bigger than it? Or perhaps I am too rough? ;; She quickly concluded that if this Lizard did fear her she didn't particularly care. She has no desire to change its mind and was simply curious as to the purpose of its reaction.  She lays the spikey beast on the metal table and with tape adheres it there laying stomach-side up. One must work with the tools one has. Her Practice begins.

Haru has been attempting to heal this lizard using chakra-based healing techniques for some time. While there is no way to tell the time here she assumes that the sun is about to rise soon. The intricacies of these techniques are rather fascinating. The healing aspect itself isn't what gives Haru the most trouble though. It is maintaining the flow of chakra to keep the healing going. Even molding the chakra was a struggle at first. She could see the aura leaving her fingers inch by inch. Though eventually, she managed to get it somewhat consistent though not nearly enough to be considered for actual use. It took a while longer than Haru would care to admit it. The lizard seemed to be in pain at times, a sign of her inexperience. her eyes slant slightly and her brows furrow. A very small sign of her emotional state. The bruised and twisted leg has ever slightly begun to set into place. She has put some bandages and ointment on the wound as well. After some time the lizard's breathing returns to normal and its leg bruise begins to fade slightly.

After some time Haru lifts the meek creature and lays it on the ground. Time to see the efforts of her labor. The lizard stands there still for a moment, possibly looking around for threats before walking. Well, Hobbling is a more accurate description. It can move again which was a step in the right direction through its leg might be permanently wounded. Returning it to the wild in this state would mean its death. It will either be eaten or unable to hunt food. Haru looks down on the pitiful creature. She feels a tinge of something. Not exactly guilt but maybe just responsibility. She failed to heal this lizard properly and now it will likely starve. She picks it up and puts it in the cage again. ;; It will be staying with me for a while I suppose;;. The Lizard stares at Haru. It has no particular feeling about the situation; it doesn't even know what's probably happening. Either way, the lizard means something to Haru now, something she has been trying to achieve for years as her primary goal for the foreseeable future. Progress