"theres many things I would like to train but sadly I can not train them yet so my options are limited. but I do have two ideas, one is you help me train a genjutsu that makes you fall asleep or a med jutsu that gives you my chakra." Orokana said reading his book more. "i still have not decided what I want. " Orokana sighed.

She shrug lightly as she shake her head lightly. Like if she was stretching or something. "Well...I'm really chakra empty right now..I wouldn't mind to train the chakra one." She chuckle lightly. "The gen would just be too much on my little sleepy body right now I think.." She flash him a soft smile as she sat down and look at him.

"ok, so for this if I remember right..." he said quietlt pulling out his book, reading the jutsu page and flipping to where he put this tech. he studied it for a moment then he remembered everything. "this is going to take some time, so while I try the tech lets get to know each other better, it will be less awkward, hows your family?" Orokana said storing chakra. while she answered he would do the seals Hare Ox Monkey and then touch her arm.

She sigh lightly at the mention of her family before she look up at him. "Well..Death. My father was killed for his DNA and my mother died as she fought with him..." She give him a fake smile as she look away for a moment. "Not something I'd really like to talk about..And seeing your reaction at the orphenage I'm thinking you might had something related? If you don't want to talk about it it's fine...But I can listen too."She smile. 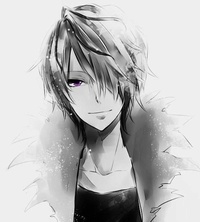 he noticed he did not have the flames her needed for this jutsu, so he stored his chakra and waited for it. "well I do not know if my parents are dead or alive, they left me when I was too in some run down bandit infest town, as luck would have it I became a child slave and was forced to do everything, if I say anything other then yes I would have been beat, it was a great time if I am honest." he said as he tried it again but again nothing, he needed his blue chakra flames on his fingers before he could do anything.