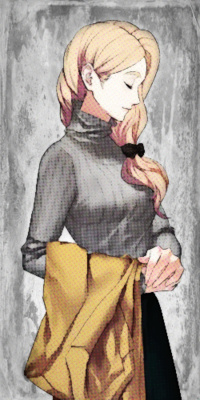 Momochi had come down with an unexpected and unnamed respiratory virus which in no way reflects any real world events, and as such she had to retire from active duty. No need to hold on to a bunch of stuff she couldn't use, though, so sooner or later Sugi Murata would come into possession of a massive cardboard box labeled illegibly in sharpie.

There was also a note.

I hope this finds you well. Due to sustained lung damage, I can no longer fulfill my duty as an active shinobi, and as such I entrust these to you. Leaving good equipment to rot is a waste.

As for me, I intend to become an author. Perhaps my works will live on long after my name has faded from memory.

Attached is a rough draft, should you be curious.

Said attached rough draft would be labeled 'FOREVER ICHA ICHA'. Its contents are... indescribable. Perhaps its best to keep it away from the younger village members...


(OOC: Giving murata all my ic inventory. momochi is retiring to become an 'author'.)

Murata hums with sympathy at the letter, idly organizing the box's contents for future use. She raises her eyebrows at the donation of the girl's ryo. Surely she'd need that for ongoing medical care? Momochi must be remarkably confident in the marketability of her work. Murata scans the draft and comes to the conclusion that it will either be a smash hit or banned under obscenity laws.

The Mizukage jots down a note to self to make sure the young Yamanaka is taken care of medically and to write a letter later thanking her for her services to the village... and to... literature.

EXIT
Claiming above stuff gifted by Momo (42,200 ryo, 1 Hemlock, 1 Pufferfish Gill, Anbu arm & shin guards, an enhanced soldier pill, a halberd, 5 kunai, and 20 legacy shuriken, kunai, and senbon, draft of Forever Icha Icha. Not sure if the ANBU equipment, enhanced soldier pill, and legacy items are giftable since they were event items, if not just claiming the other stuff.)