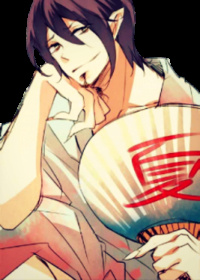 "Don't mention it." Zento said as she thanked him. It wasn't anything he thought too much on. After closing his door behind him, Zento  looked into his room. Looking almost identical to the guest room other than having more personal items laying around. Zento would sit on his bed. His back against the wall the head of his bed was pressed against. Sighing and closing his eyes. He would wiggle his arms to slip out of his sleeves. Pushing his robe to expose his upper body. Covered in burn marks and scars. His chest having a big burn mark over where his heart is. Covering up most of that part of his body. Small lines reaching to his shoulder Moving his hair and tracing the scars that his hair covered. Looking as if he was stabbed in the neck. His back looking as if he had been whipped over and over with parts of his back having marks that looked like skin was pulled off. Taking a deep breath, Zento put his hands on his lap. Holding them together. He would begin to meditate. Listening to the sound of his own breathing.

In, out, in, out. Zento told himself as he took a breath. Emptying his mind Zento would relax. His mind at ease and suddenly hearing some of the wooden door have a light knock on it. It was Iki. Zento opened his eyes and looked over at the door. Sliding off his bed and walking up to the door. Grabbing it and opening it up. Looking over at her and began to slide his robe back on to cover himself again. "How can I help you? Please, come in." Zento said moving out of the way for her to walk in. Looking at the clothes he gave her. It might have to do with the sleeves. Zento looked around to see if he had anything to help with that. But, not in his room. Zento walked over to his bed. Sitting on the edge and looking over at her. He wondered what she wanted to talk about., 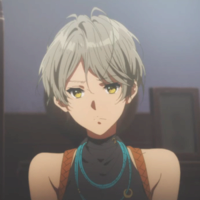 The door slid open silently , making her jump back as the hushed hallway was thrown into new relief from the light splling out around Zento’s frame in the doorway. Her eyes immediately noticed his hands pulling his robe again, fastening it in its normal place - but she was able to notice more of the scars she saw earlier on his arm. She narrowed her eyes slightly - noting to ask about those when the time was appropriate. Flashing her eyes up to his in an attempt not to stare she would clear her throat and walk through the door, held high with confidence - and she walked into a mirror verison of the room she just left. It was striking how it was mirrored, only a few articles of personal possessions confirmed it was a different room. She turned on the spot to take in the room fully - her hem of the robe swishing against the floor with a whisper, her eyes coming to a halt at his face - now sitting on the edge of his bed.


Right well… what had she come in here to talk about… Her mind was struggling against the oncoming questions she was feeling - why was this house massive and yet so empty. What happened to his family… what happened to his body?! And this was all warring with the questions that she had come to ask; those questions weren’t winning. Finally crossing her arms she stared over at him , a hard look encasing her normally happy face - “What happened to you Zento. You live in this huge home and no one is around that I can tell,” She threw her hands up gesturing around, then gestured it at him, “-and your skin. Those aren’t normal scars.” her tone was strained, and a little worried. She wasn’t angry or aggressive just very pointed with her delivery. She waited, staring back at him for his explanation, he had been nice to her but there was something he hadn’t yet explained - she wanted to know.

Zento smiled as she walked through the door. Looking at his room and seemed to be studying it. Something didn't feel right to Zento. Her mood changed. He sat there for a moment wondering what might be bothering her. What could be causing her mood change. The thought was cut short as she asked him what happened to him. Asking about his house and his scars. He blinked a few times. Unprepared for the questioning he got. She seemed concerned for him. Thinking what he should do. Does he play it off? Just sugar coat it? Zento thought for a moment then decided to speak. "Yeah. It's just me here. If you want complete honesty, this isn't my actual house." He spoke. Pointing out the window towards the outer parts of the village. "My real house is a little bigger and outside the village. This was my families place to stay when they had work to do in the village for a while."

Zento still having a soft smile on his face. His eyes having a slight look of sorrow in them. "They died. It was from another family member who lost it. I fought them off but ended up losing the fight. I was stuck in a room to be tortured daily for a couple years." Zento speaking as if it was a casual conversation. "After I got out and traveled around, I had my share of close fights." Zento's arms would shake a bit. Loosening up his robe and sliding both of his arms out. Exposing the top half of his body. his back facing her first. Showing the markings of being whipped and scar patterns of what looked like skin being ripped off. Burn marks along his back and shoulders. Zento's arms covered in different scars from many different blades.

Zento turned to face her. Having his normal friendly expression on. "But hey! I'm still here right? Gotta be worth something." Zento laughed as he closed his eyes and rubbed the back of his neck. The scars on his chest showing burns and a tattoo on his chest. A gear with the number 77 inside it. A marking he put on any weapon he built. It was clearly redone over scar tissue. Zento then slide his hands back into his sleeves and in one quick motion, sliding the robe back on and tightening it up to be back to normal.

((ooc: can you put what you are claiming so I can approve ? Let me know when you do.))

(44 stat points, finishing off water dragon with 1798, get all word count for hiding in the rain)