Rosa grabbed something out of her bag and walked over to Kotetsu. He didn't notice until she had held out a bottle of water in front of him. Kotetsu hadn't even realised he was thirsty until he saw the drink in front of him. He gratefully accepted the offered bottle. "Thank you very much Rosa. It's appreciated." He said as she made her way back to her own tree. She leaned against it and had a drink as well. She seemed a tad annoyed from his question. "With all due respect Rosa, you were doing what appeared to be something other than training, and you're not the first person I've seen that's come here to read. I also do not mind some days laying on the grass or on one of the ponds and just staring up at the sky." He was taken aback by her tone of voice, but he kept any change out of his, so as to not come across as disrespectful. He did not want to start a fight here, not knowing how strong Rosa was, plus he wasn't one to fight for no reason. "What was it you were wanting to train while you were here? Perhaps I can assist in some way. I do have a wide variety of jutsu at my disposal." 'Perhaps there is something I can learn from her, and vice versa...' He thought to himself as he awaited her reply. 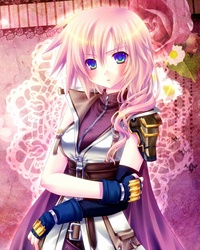 The young man gratefully offered her appreciation at her gesture, taking the water as she walked back to her tree. After she answered his question, he had a comment of his own, catching the girl off guard, despite her expression remaining the same. It seemed she had forgotten what her training looked like to others, an easy thing to forget when one cares not what others think, and thus she spoke out of turn. He said her training had looked like anything but, and that he knew of others, including himself, that came to the training grounds to read or just lay on the ground, watching the passing sky. It was similar, she supposed, to what she had guessed who be why someone came there besides to train. In response to his statement she nodded her head slightly, acknowledging what he said but staying quiet on the matter of her being in the wrong. He knew she was, and she knew as well, so there was no use in voicing what they both knew.

His tone, as he ended his speech of sorts, was respectful just as the previous times he had spoken to her, even despite the tone she knew had been present in her voice. He was a smart kid, and not one easy to anger it seemed. That would take him far in this world, and for that she gave him some credit. She might have been a tad too harsh, considering he wasn't wrong in his statement, she hadn't taken into account her own actions in his eyes.

Kotetsu pulled her away from her thoughts as he asked what she had been training, wondering if he could assist her in any way. She thought this was a perfect opportunity to train what she needed without having to ask herself for help. With a softer tone than before, she turned towards the young shinobi to the right of her, “Actually, yes. I appreciate your offer, Kotetsu. Do you know any genjutsu, or the technique genjutsu release? Also, do you happen to know any space time or fuuinjutsu techniques? Those were what I was hoping to train."

'There we go...' Kotetsu thought to himself as she seemed to perk up slightly at his last question. She had remained silent for everything except that. "As a matter of fact, I have several jutsu in all of those areas except Genjutsu. I have mastered Genjutsu release to the point where I do not need hand seals to use it. I know how to place Mark Seals and Fuinjutsu Locks, as well as how to break basic Fuinjutsu. I Also have a Fuinjutsu for sealing water into a scroll to release at a later time. In terms of Space-Time techniques, I know how to move small objects, I can create a small dimension to store various items inside, I can also use Space-Time to make myself faster. Since I have a few different options to work with, which one did you want to start off with?" He let Rosa decide since she was the one who wanted to learn what he knew, and he was in no rush to be anywhere else, so he could help for as long as she needed him for. Plus since they were all very low-tier jutsu, they would not use a lot of chakra, so he would be able to take it easy while he taught her.

The pinkette listened intently as the boy ran off a list of all the jutsu he had in those specific categories, the ones that interested her the most. Sure she had focused on ninjutsu to start out with, but her main areas of interest were with fuuinjutsu and space time techniques. Lucky for her she found someone with both those specialties to help her learn a number of new jutsu quickly, and he was kind enough to teach her despite her slightly harsh first impression.

She pursed her lips as his voice quieted, until all that could be heard were birds chirping overhead and the whisper of air as they breathed in and out. It took her but a few seconds to make up her mind on what to begin with, her gaze meeting Kotetsu’s as she began, again showing her gratitude as her father had always told her to do, “Thank you for taking the time out of your training to assist me, Kotetsu.” Rosa didn't smile as she spoke, but he could note that her tone held no aggression, annoyance, or crude undertones to it. “I think beginning with the Genjutsu Release technique would be a good start, and then after mastering that technique, we could continue with the fuuinjutsu techniques. Does that sound alright with you, since you are the one teaching me?”

Rosa would patiently wait for the young shinobi’s reply, and was prepared to start learning the moment he said so. She was always a diligent student, and caught on fast to jutsu no matter how difficult it might seem.

Kotetsu waits patiently for Rosa to answer his question. As soon as she's finished, Kotetsu reaches into his bag, and without changing his expression, pulls out what look like three Christmas crackers and opens them in quick succession.

Kotetsu watches as a couple smaller crackers fall out of the first one, a strange ticket from the second one, followed by a sugar plum from the last one. He puts the sugar plum and the ticket into his bag before opening the two new crackers. Once he's done that, he answers Rosa, not looking apologetic at all. "You're welcome Rosa, and I am fine with that order." He says to her with a smile before starting into the explanation of Genjutsu Release. "Genjutsu Release is a very simple technique. All it requires is for you to form a tiger hand sign and imagine your chakra racing through your chakra network. The sudden change in your chakra flow will snap you out of a genjutsu as long as your chakra is stronger than that of the Genjutsu itself. Unfortunately since I do not have Genjutsu, I can't put you under one for you to know if you can successfully break out of one. We can however just go over the basic hand sign. I recommend trying to master this technique, since being able to use it without the hand sign will be valuable if you cannot move your hands or arms."

Kotetsu would watch Rosa go through the motions of using Genjutsu Release when a hawk flew overhead screeching three times before departing. 'Dammit...' Kotetsu thought to himself. 'I didn't think they'd send me on a mission so close to the Chuunin exams. Oh well...' He got up quickly and collected the remains of the crackers and the prizes they contained and placed them in his bag. "I'm sorry Rosa, but it looks like I'm required elsewhere. I will need to pick up where we left off some other time." And with that he headed out of the training grounds towards the mission center to find out what mission was in store for him.