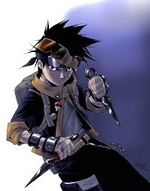 Kaen looked at his encyclopedia. For the last few days, he had been tree walking and water walking to increase his chakra reserves. He had been meditating to get a better feel and sense for his chakra pool. It felt clean, pure, and very cold. Chilling to the touch, but Kaen had loved that feeling. It made him feel like he was at home, wherever that was. Anyways, he had been looking through his Jutsu Encyclopedia and decided that he was going to learn lots of stuff within the next few days.   He had to proofread between the lines to find out how to make devastating combos with simple techniques.

The first skill that he was going to practice was Iron Claw. The firm grip against someone's face that cost much discomfort. Kaen's first major plan in his life was to become a Genin, and he had already done that. The second next major goal was how to learn how to access his second element which he was pretty sure was water. If you knew that he was a Yuki the third major plan was to unlock his Kekkai Genkai, and then create some awesome skills, or at least learn all the skills that his clan had to bring. The fourth goal, make an awesome team with great diversity. That was what he wanted in his life so far. He'd probably come up with more skills as he went.

Kaen had instantly gotten started. He went into his father's old training equipment and pulled out a white-steel hand-gripper and as soon as he grabbed it he started to press it. It was actually really hard, and he couldn't even finish one clasp. He decided to flow chakra into his hand, and he had noticed the difference of his chakra flow. How it was easier flowing, like he had better control of it. Oh wait, he had better control of his chakra.

Giggling to himself Kaen continued to do that while walking around the town. Most people decided to stay inside their house, but he saw a few kids running around laughing. Kaen smiled at those kids as they ran in the street. There was hardly anything moving around here unless a few wealthy villagers owned a carriage. They didn't have as good enough control to chakra like ninja had, so they didn't depend on running around like maniacs. Kaen noticed his hand starting to ache so he switched the hand-grip to his left hand.

Whistling, Kaen looked around noticing the beautiful landscape that was in front of him. There were beautiful blue jays flying into trees with light-green leaves. The sun shone perfectly on the Lightning Country as everyone seemed to be having a good time. Kaen had noted that every time it was sunny out people tended to have good moods, and then when it was rainy out people had more sullen moods. Eh, maybe that was just Kaen.

Again, he switched hands as he finished 1/4 of the block he was walking on. He started to flow more chakra into his arm as he went, finding it easier. The first way to use the Iron Claw technique is to have brute power, and grasp the opponent without letting them go. The second way to use the Iron Claw technique is to be fast enough to grab onto the person without them moving out of the way. The way to make the technique together is to use those two aspects of it, and form it into one grip of steel. That's probably where the name 'Iron' Claw had come from.

Kaen deciding that he had used the hand-grip enough, he had switched to more realistic training. Dropping to the ground, he started doing push-ups. He was in a playground at the moment with a few mothers and fathers watching their children play with each other. Grunting at the sight, he tried not to get emotional at the thought of his mother like he had a night ago.

The memory was still fresh in his mind, but then again he needed to focus on training. Kaen took a break to take off his black jacket and throw it on a nearby bench. His white t-shirt wasn't so white as it had dirt and sweat over it. He'd probably go wash his everyday outfit when he got home. More push-ups had ensued, and as his arms bent and he went back up he would grunt not giving up from the exertion of his muscles.

Kaen walked to the steel lamp pole at the side of the street. This is where he'd practice this Iron Grip. Kaen closed his eyes as he thought of someone coming to hurt his family. The people that he loved, and his best friends. Then he imagined them dying at the hands of enemies, them being impaled with kunai, and trailing their organs. He'd think of Chisana looking him in the eye as he stood there in fear not being able to help her.

Suddenly Kaen screamed out as he ran directly into the pole, activated his chakra throughout his body, and clasped his hand on the street light holding it so hard that the metal actual started to become dented. Kaen breathed in and out as he came to a stop, and had quit wrangling the poor pole. Kaen looked at his hand that he had used to crush the pole and then looked up into the blue sky. The sunrise had looked beautiful today...

Another goal in his life was to get stronger so anyone that he loved would never be harmed.