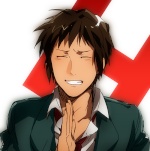 Task: A boy has been putting graffiti on the wall of buildings. He has thus far managed to escape custody, and posses skills equal to that of an Academy ninja, able to move around on rooftops to escape capture. Now it is your turn to try and capture him, good luck!

"I've been doing pranks my whole life, so I guess I'm pretty good at it." -Bam Margera

Now this felt more like a ninja's work; catching a dangerous felon, loose on the streets of Kumogakure! Only elite gumshoe private eye with no rules and a quick trigger finger, Ryoushi Azuma, can catch the sneaky cuplrit! Will Azuma be able to save the day? More importantly, will he be able to catch the eye of the gorgeous femme fatale pink-haired jounin who handed him the mission in the first place?

Probably not. This was hardly as melodramatic as Azuma had envisioned it, at first. Most of the detective work had been done for him, and all he needed to do was apprehend the prankster. He seemed to have a penchant for leaving graffiti all over shinobi-related buildings. So far, the only building he hadn't hit was the barracks, and so Azuma was staked out quietly nearby. This felt more like a hunt than a mission, and for the son of a clan of renowned trackers and bowman, it felt simple, easy, and natural. Finding cover was like breathing, and waiting for the right moment to strike, no matter how long it took, was as easy as falling asleep.

Thankfully, Azuma didn't fall asleep; he couldn't if he'd tried. The sunset was searing the mountains a gorgeous array of orange and gold, and it wasn't a sight anyone in their right mind would sleep through. Still, Azuma didn't let himself get distracted by the evening lights slowly winking on across the mountains, revealing the true stretch of the city hidden amid the rolling clouds.

Finally, he saw a small, dark-skinned figure dart into the alleyway, a cap hiding his face from view. Peeking around, the young boy rattled a spraypaint can, setting about his work defacing the wall of the barracks.

It was now or never. The Ryoushi hunter instincts kicked in somewhere in his gut, and Azuma pounced. Leaping out of cover, he grabbed the boy by his arm, pulling him up as the taller young man stood, grinning widely. "Got you, you little-"

The hat fell away, and a lush waterfall of violet hair fell, furious emerald eyes locking onto Azuma. He blinked, and his culprit did too. This wasn't a boy, this was a girl, and it was someone who knew him. "Oh," Chao Izumi said, scowling darkly at the man in front of her, "It's you. Hey, elf."

What in the world was she doing here? After the class, Sensei Makoto had commented that this girl wasn't much for acting out, always the respectful student. Maybe that was a guise to keep people off her tail while she vandalized the city, but Azuma thought there was more than that. "Izumi, right?" Azuma said, still sort of stunned to see her glaring at him, "What're you doing?"

"Leaving graffiti on the barracks."

Those jokes were getting tiring. Eyebrow twitching, Azuma frowned at her as she fearlessly pouted right back at him. Taking a deep breath, he sighed, before looking her right in her gleaming emerald eyes. "Do you like dango?"

Apparently, she loved it. Three skewers into her Hanami dango, and already on her third,  Izumi beamed as she tucked away another dumpling, the trio of remaining dumplings likely fearing for their lives, her green tea remaining untouched,. Azuma watched with a small smile, still working on his own. "How is it!"

"Mmm! Delishush!" Izumi mumbled through a mouthful of delicious dango, before swallowing gratefully, "I should tag buildings more often!"

Azuma sighed. "Not why you got dango. I wanted to talk to you about what you've been doing."

That seemed to damper her good mood. Izumi scowled, wiping her mouth on her forearm. "Whatever, elf. Maybe I don't want to talk."

"I think Sensei Makoto would want you to." That gave her pause, her eyes widening slightly, before she looked away, a bit of shame in bright emerald eyes. "She's very important to you, isn't she?"

Izumi nodded. "She reminds me of my mom."

"Your mom?" This was the first Azuma had heard about Izumi's family.

The violet haired kunichi's face fell, as she looked down at her shoes. "Yeah. She was a kunoichi, too." 'Was.' Oh, that wasn't good. Azuma felt his heart go out to the prankster. "One day she left for a mission, and she didn't come back. Dad took it hard, kind of shutting down. We got through it, but it's not the same without her around."

"So you look to Sensei Makoto as your mom, then?"

There was a pause before Izumi nodded.

"I can see that," Azuma said, before nipping off one of his own dumplings. Izumi stayed quiet, her appetite seemingly forgotten, "What does your dad do?"

"He sews suits," Izumi said, "but he's always working. He never hangs out with me anymore. Anyone who does just looks at me like I'm someone to be pitied."

Things were starting to come together. "And you're doing these pranks so he'll notice you?" Izumi slowly nodded. Azuma was reminded more than a little of himself in the Academy, doing anything to get people to notice him and admire him, just for the sake of being adored. "How did you figure out when to do it?"

Izumi blinked, looking back up at the older shinobi. "Huh?"

"There must have been guards watching the places you tagged. How did you figure it all out?"

"Oh," Izumi said, looking up to the starry sky thoughtfully, "Well, first I had to memorize the guard shifts, then find their blind spots, then account for any inconsistencies or surprises, then find the best day to make my move."

Wow. Azuma had to be impressed with the amount of forethought she'd put into everything. "You know," he said, taking a sip of his cooling tea, "if you dedicated those kinds of brains to your homework, you'd bring home grades to amaze the Kage. You could probably be Kage, if you worked at it."

Izumi's emerald eyes flashed around, cropped violet hair whipping about. "You think so?"

Azuma nodded. "Yup. But, first, about the graffiti." Izumi's smile dropped, eyes widening. "You're going to spend tomorrow cleaning up every bit. No jutsu, only elbow grease."

"Ninjas work on Saturdays. Didn't you know that?" Judging by the scowl, she hadn't. "I'll ask Sensei Makoto to keep an eye on you. If you can clean it all up, I'll ask her to take you out for dango again, my treat."

"If," Azuma said, looking to the young kunoichi, "you behave, and get good grades. No more of this, alright?"

Izumi sighed, but nodded with resignation. She paused, and looked back up at Azuma. "You know, for a rude, preachy, pale-eyed elf, you're not totally lame."

Azuma paused, teacup halfway to his lips. "That was the most backhanded compliment I've ever heard."

The kunoichi smirked, taking a sip of her own tea. "I meant every word."

Re: Mission: Catch the Prankster