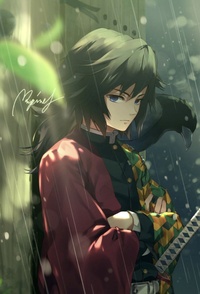 One day while Yutaru was Roof climbing with Yuel, the two found themselves hot on the trail of toad slime. While Yutaru was leaping from top to top the snake had sniffed the foul smell out, and a typical day of training became a search.

For some time the two had been glancing by at someone tracking them. Yutaru had been pegged out of an unknown group, and the two still hadn't figured out where the Association came from. When Yutaru wasn't studying his Acadamy training booklets, he was found with Yuel conducting gene therapy 9n rare lotus seeds. The two hoped to make a sensual, healing medicine from their study: but it wasn't all that was on their minds.

The two were often on the lookout for Toads, a sign of the trespasser. Lucky on this day, Yuel was able to sense the ectothermic heat trail and used telepathy with Yutaru to guide them to the source. What they found was unexpected, but the scene continued when they arrived.

A small frog was tongue punching a few young civillians, crying about "Mwoney!" Whenever the toad cried out its tongue would be mid punch, and the brutal beating seemed light hearted. It wasn't though, and Yutaru jumped into action.

The snake, Yuel, slithered around Yuelsilv into his sleeve and Yuel flung his hand forward. A portal opened at his fingertips and forward towards the snake another. The snake leapt out and immediately subdued the toad, Yuel gripped it hard in a coil. The frog could barely breathe, but the air was safe now.

The ptwo young people who were being beat stood up and mumbled something about a brute thug. They were very shaken by all that had transpire. The young man fumbled Yutaru some protection money and they ran off. Yutaru hadn't a moment to speak, but he didnt anyways. Instead he put the money in his pocket and moved toward where his snake was still fighting with the snake.

Yuel hissed loudly as it struggled to keep the toad down.