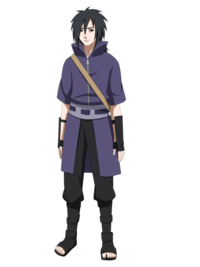 The many mountains of Kumogakure were often filled with many different creatures and things that called this place home, though most were hiding on days like this when the sky was darkened by storm clouds and the world was shrouded by the pouring rain that drenched the earth below. Lightning making crashing and exploding sounds as it struck the many mountain side trees, it was a terrible storm indeed and in the midst of the horror stood on young Uchiha. Eyes closed though his face turned to the sky feeling the rain as it hit his face and ran down him dripping to the ground below, it was Asuma who stood there as his own clam with in the storm as it raged on without hesitation. A massive explosion just merely 3 meters from him as lightning struck a nearby tree, the shrapnel being deflected by a quickly and precisely drawn kunai in Asuma’s right hand. Though unbeknownst to him he was not alone in the storm despite most animals running for cover especially with the lightning taking trees from the forest at will, no instead Asuma was being observed by a rather large and individualized crow who sported a distinct shape to the feathers upon his head. The crow was interested in this young man who seemed unaffected by the raging in this natural disaster as it tore the forest apart around them, though his focus on Asuma put him in danger when the lightning struck the tree he was perched on. The explosion sending bark and wood flying in every direction, Asuma quickly looking up to once again deflect the oncoming shrapnel was distracted at the sight of feathers and had his right arm impaled by two pieces from the broken tree. His hand dropping to his side as blood ran from his bicep which had wood spikes hanging from it, he could feel the pain inside his muscles with each second the blood pumped out. He began to scan the ground looking for the source of the feathers he had seen, only to find a crow laying on it’s back wings spread and barely breathing. Asuma reached with his left hand cradling the struggling corvid as he made his way to a nearby cavern and laid the bird comfortably on the ground, he then began to gather the driest sticks he could and made a fire to warm the two from their drenched bodies. Asuma also proceeded to collect a few leaves from a herbal bush that makes a nice natural antibiotic. He used a stick and pressure to roll and squeeze out the natural thick oil from within the leaves, the sticks still in his arm for the time being he ran his left fingers in the oil and applied it to the torn skin on the crow. The corvid began to fight and thrash at first when Asuma applied the oil however, this was mostly due to the stinging like property of the oil itself.

With the crow now asleep and breathing calmly by the fire, Asuma turned his attention to the sticks in his arm. Taking hold of them with his left hand and ripping from his arm letting blood splat to the ground below, he winced in pain at the removal of the impaling artifacts and at the covering of the wounds with the natural oil. He then used the flat and flexible leaves to create natural bandages which he wrapped his arm with, it would help to stop the bleeding and increase the chances of healing.