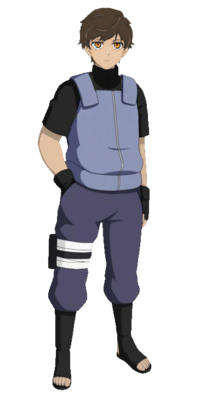 A slight crunch accompanied each hurried step of the genin, his large frame accentuating the pressure placed on the frosty ground, causing the crisp announcement of each footfall. He was heading out of his normal path today, away from his shop in the city center, his home not to far away from there, and the restaurant he worked at. Instead his path seemed to take him to the water gardens this evening, just as the early dusk of winter was beggining to erode at the daylight.

His hands were stuffed in his jean pockets due to the cold weather, a heavy brown sweatshirt with the hood pulled over his head, and the pace he moved at kept him at least a little warm, as did the residual heat built up from a full shift in the kitchen. He would much rather be heading home, but he grudgingly knew he should make this visit to the training grounds.

He had been very careful to wear gloves recently in his work, and his training was providing him with great control over his chakra. But he still felt like it was building up inside of him. It felt wrong to keep his tenketsu shut off from the world for such long stretches. As he passed through the gates, he removed his hands from his pockets and took the thin gloves off, walking up to the closest tree. As he placed his hands against the cold bark, he could sense the alive-ness of the tree, the nature of chakra that is bound into living things. He concentrated just as his training had taught him, and let his chakra flow outwards, infusing the tree with it. He could feel it spreading alone the leylines of chakra within the tree, complex twisting and turning pathways that were so deeply ingrained within the thing that they both didn't seem to make any sense and at the same time didn't seem as if they could be any other way.

His pent up chakra, after days of not being used, felt ..... not as if a relief, but natural. The tree, without agency to act on anything his chakra might actually try and do, never the less felt more 'alive'. He silently willed it to grow sturdier, stronger, to renew and replenish the areas slightly marked and damaged by training ninja. He wasn't sure if it made any difference at all - he was only doing it as a whim, with nothing else for his chakra to suggest - but as the first stars began to appear in the darkening sky, he felt it couldn't hurt.

Kaibo stayed at this for quite a few minutes, draining his chakra to low levels, never straying from the one tree. In fact, barely moving at all. The exercise would work just as well with a blade or rock or any object, of course, but for some reason it felt more right, more natural when it was a living object. Almost never showing up to train the more common ninja skills in this area meant for such things, it was instead that feeling that occasionally brought him to these training grounds, even when tired and ready to go home, instead of just doing this in the comfort of his own room.

Finally exhausted, Kaibo removed his hands from the trunk of the tree. His breathing had gotten heavy without him noticing, so absorbed was he in the task at hand. He felt a lot better though, not forcibly shutting off his tenketsu from the world anymore and letting it flow, even if for a brief period. As he re-caught his breath, he pulled back on his gloves, and then headed toward the gate. As he passed through, he took one last look back at the tree, which he could still feel his residual chakra in, slowly diminishing, and then was gone back into the night, to get some sleep.