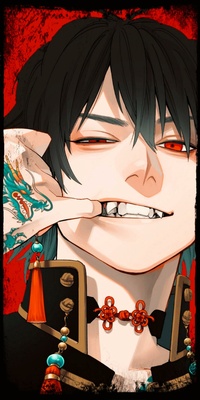 The day was surprisingly warm, the mountain air carrying with it a nice tinge of cold, fluctuating Shien’s body temperature mildly. It felt and looked wonderful outside. The signature clouds of the village were sparse, leaving the brilliant blue sky and sunlight open. Birds chirped, their songs coursing throughout the air along the breeze. The melodies were soft and sweet, giving the atmosphere a sort of cheery feeling, a stark contrast to last night’s events. The genin’s lips puckered as he ran his tongue over his jagged teeth, his stomaching giving a low, basey rumble that, funny enough, harmonies with the high pitched songbirds. Shien’s expression flattened in embarrassment, his viridian cheeks taking on a rosy color.

The streets of Kumogakure weren’t so bad. In fact, Shien quite enjoyed walking them at this time of day, especially with weather like this. It hadn’t been such a pleasant afternoon as this since his arrival at the village. He walked alongside Ikigai, the both relieved from any classes at the academy for the remainder of the day. Boru had thankfully given him the day off from the cafeteria dinner hours. The thought of seeing another bag of rice was almost sickening. But still, he hadn’t ate anything since breakfast.

Tagging along the soft breeze, Shien could smell the nearby marketplace. Fresh fruits and vegetables, deliciously seasoned chicken ramen, and the sweet syrup coating on dango flared his nostrils, prompting a bit of drool from his lips. He quickly wiped the corner of his green mouth, clearing his throat. The smell was intoxicating. And if he was hungry, he knew Ikigai was. He had to be.

Typically, being a friend, one would offer to pay for another’s meal. Shien thought himself fairly generous and giving, the missions Hakai sending on him paying considerably. He purchased small luxuries leisurely, comfortably, even. Despite his many flaws, the Doku was good at keeping up with money, spending it wisely for the most part. That wisdom served him no better than with Ikigai. He was somewhat generous, yes, but his best friend was a whole ‘nother animal. The man resembled sharks in more than just appearance - his appetite was insatiable. When Boru told the Doku he’d caught Shien eating from a bag of dried rice, the genin hadn’t a doubt that his sensei was telling the truth. Anything the man ate, hell, even cereal, resulted in a sort of feeding frenzy. He’d never seen someone eat so rabidly, with such ferocity, or as much. Days when Boru made fish onigiri, rice balls, were the worst. Shien was sure to make extra in preparation, and, even though Ikigai often sat at the table furthest from the serving window, the Doku could hear the young man feasting like some beast deprived of a meal for a week when, in actuality, it had only been two hours. It was a wonder his stomach didn’t have a higher reputation than his skill with the blade. I know which one I would rather fight… Shien thought to himself, glancing at Ikigai briefly.

This was, of course, all hypocritical. Shien was almost as big as Ikigai, measuring only an inch taller. No one grew like that by eating an occasional stuff rice ball. The only difference was that Shien knew where to stash his food and to eat later, away from the prying eyes of others at the academy. The gnashing and gnawing paired with his chugging probably gave his “next-dorm neighbors” a different impression, however.

Shien felt around in his jacket pocket, grasping his coin purse. It stretched out, stuffed with several coins and dollars, filled to the brim with ryo. Thank you, Hakai-Sensei, he thought to himself, lightly tossing it in his jacket pocket. The missions he spent earning this ryo had been taxing, exerting, but now he could reap the rewards. And nothing sounded better than a Swordsman’s Special of dango, a dish named for Hakai-sensei himself. Shien hadn’t asked why exactly, too often stuffing his face with the sweet dumpling and leaving the man with a nice tip. “You hungry, Ikigai?” the Doku asked, spying the dango shop around the corner. “Oronichi makes the best dango I’ve ever tasted! It’d make my mother jealous,” he laughed, slightly licking his lips. “There’s even a dish named after Hakai-Sensei. I’ve never asked why, but if the story is as good as it tastes, well,” he paused, swallowing, “oh boy.”

Shien continued walking, arms behind his head as he closed his eyes, taking a deep breath through his nose. The stench of the rot was noticeably absent, a great change of pace from his last mission with Ikigai. Instead, his nose and thoughts were filled with sweet, sweet dango. His mouth had practically become a waterfall at this point, Shien actively fighting the drool. He swallowed once again, setting his eyes on his target. “Come on, Icky, let’s go!” he said, jerked his head towards the shop with a bright smile on his face. It was nice to distract himself from harsh reality. Truth be told, the events of his mission with Hakai and Boru left him awake for the remainder of that night. Any sleep he received was rife with night terrors and horribly gruesome ones at that. He’d seen kumogakure shinobi slowly fade into the grotesque creatures over and over, and those screams…

The Doku had forgotten about it all, for now. This was a happy time, a beautiful afternoon. There was no sense in soiling it with something like the rot. Instead, he had to sink his jagged teeth into something sweet. The shop itself was modest, more of a small wagon, really, with a service window cut out on the side. Looks were no indication of taste, however, especially with this stuff. Oronichi made the stuff from heaven itself - or maybe the Doku was just really hungry to the point where anything tasted good. Nonsense! Shien thought, brushing aside the idea dismissively. This stuff was far too delicious to be a product of starvation.