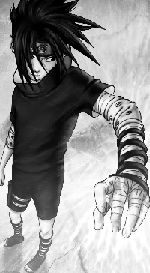 Nike was relaxing in the training grounds trying to take his mind of his late grandmothers passing, or murder depending on how he wanted to look at it. Dressed in black shirt, and white shorts, he was bored and was waiting for the dates of the genin exams to be posted. With a few kunai's and shuriken's lying around the training ground Nike decided he might as well improve his skills with them.

With a kunai held in his hand, Nike took a deep breath as he held the weapon in his hand. Facing him there  were the targets that he had hung on a few branches of the nearby trees. With a fellow ninja assisting him with his training, they were throwing shuriken and kunai at Nike whilst he was attempting to his the targets with his weapons.

"Ready?" the assistant asked. With a simple head nod, Nike's training had begun. Right then, Nike jumped and threw 3 shuriken's and the target, hitting them in the center of target. Having forgotten about his assisstant, Nike was in a difficult situation of having to prevent the weapons thrown at him from injuring him. Using the kunai that was in his left hand Nike only just about deflected the incoming projectiles. Landing on the ground some how unscathed Nike  nodded to the assistant who was waiting for his signal. At that moment the guy started throwing multiple shuriken at Nike and he had to dodge them all. For a second there was a blur of ducking, jumping. sidestepping and dodging but then there was a flash of red and Nike dropped to his knees. At the sight of this the guy stopped Immediately and ran to Nike to aid him."Hey, are you alright?" asked the assistant.
"Of course I am," said Nike," just a little scratch, nothing to worry about, shall we continue?"

"I don't know maybe we should take it easy," said the assistant.

He then got up and gestured for the man to continue. The guy walked back to his post and continued. Nike leaped as the guy through a kunai at his feet, he looked up and saw that the guy had thrown a kunai at hi in mid-air. Due to a series of twists and turns Nike successfully did a backflip in mid-air and cleanly dodged the kunai."whoa," said Nike to himself," that was cool."

"What!?" Asked Nike
"I could have sworn your eyes were black a minute ago, but now they're red is that possible?!" asked the guy
"Yeah, my they do that" replied Nike.
"Oh, okay." said the guy and prepared himself for the next set of throwing and hoping nobody dies. Nike now started climbing a tree, he next training exercise was dodging while on difficult surfaces. When Nike was ready the guy started throwing shuriken stars at Nike. Nike jumped, leaped and dived from branch to branch avoiding anything that came his way while concentrating his chakra to prevent himself from falling or slipping off the trees. Then Nike was in a tight spot where he couldn't dodge the five shuriken stars coming his way, he only had one other option. He took out five shuriken and threw it to make contact with the five heading his way, a success! Nike released a sigh of relief and then sidestepped a single kunai and leaped to another branch. Nike gestured for the guy to stop," I think we can move on, I'm done." The guy nodded and stopped.

The next part of Nike's training was dodging the attacks of rotating fists on poles. Nike kicked the first pole to begin the rotation. Two fists swung in Nike's direction, which he easily sidestepped. But then he had to leap due to a low swinging fist heading his way. The fist caught his feet and Nike fell face first into the ground. "owwww..." moaned Nike as he got up and looked around to see if anyone saw, then he smiled to himself," if a tree falls in the forest and nobody's around, does it make a sound?" that was one of the saying's Nike's sensei used to tell him. Nike frowned as he remembered another one of his sensei's sayings:" the walls have eyes and the doors have ears." Nike just shrugged and continued the training. Next he had set up a course of traps that would be triggered as he passed through it. He got ready and sprinted through. First was a line of swinging axes that he had to run through, he dived at the end with a hairs width to spare. Nike sighed and got up and continued running. Next was a space with holes that would randomly shoot fire at any time. Nike took a deep breath and proceeded. He sidestepped over a hole which shot out fire immediately as he crossed over it he then jumbed over a few holes and stopped dead in his tracks as a hole in front of him shot out fire," that was close," he thought to himself. After a few minutes of jaw clenching dodges Nike successfully finished the course. "I can call it a day," said Nike to himself.

Satisfied with the training that he had done for the day Nike begun to gather his things. He thought to himself about how he was going to take and pass his genin exam. All the last few bits of training would be for nothing if he couldn't even do the jitsu's that were necessary to pass. Quickly running through the required hand signs for the clone technique, Nike created a perfect copy of himself that just stood by him. Dispelling the clone Nike was satisfied with knowledge of knowing that he knew the techniques to pass the exam, and all that was left now was to take it. With all his things gathered Nike set off from the training ground towards his home.