Salzem had finally found the training grounds after what seemed like a long time, at least to him. His giant Blue Spider crawled along next to him, devouring what remained of a bird he had caught. She drank it's liquefied innards happily, discarding the dried husk as they entered the training area. At least this seemed constant with children dueling each other to hone their combat techniques. Salzem walked through the grounds, shoo-ing his colossal arachnid in front of him. He did this for two reasons: One, so she doesn't wander off, and Two, to get her to her training area before she changed her mind about training. A few genin (at least he thinks were genin) caught sight of Zeefalvora and gawked at the size of her. Salzem smiled under his mask at their expressions. Priceless. When they came to a wooden training dummy, Salzem kneeled down so that he was eye-level with her.

"Now... I want you to destroy that dummy." Salzem whispered to her. "Turn it to Mulch." As if a switch was flipped, Zeefalvora used her powerful back legs to launch herself at the wooden dummy with such force and power that she actually managed to tear it out of the ground and knock it on it's side. Zeefalvora rolled off the dummy for but a second before plunging her two forelegs into the Dummy causing splinters to fly this way and that. Salzem crossed his arms and watched as his familiar obliterated the wooden dummy, splinters all up in her blue hairs as she came crawling back to Salzem. He stroked the top of her cephalothorax, right between her eyes with one hand, while he picked the splinters out of her hair with the other. 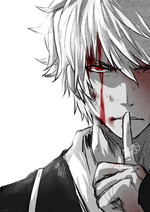 Kyofu as he was walking towards the training grounds caught sight of a man and what seemed to be a giant Spider. Now that was not something you see every day thought Kyofu as he followed them. As he walked towards the ninja or whatever the guy was he would scream outloud saying " Hello there it appears that I have not seen you here in Hoshigakure before, are you a new recruit? " asked Kyo. Of course as he was asking his question the training dummy that the spider attacked was quickly destroyed. It looked like that creature was powerful from the looks of it, he wondered where the man even obtained a creature that had capabilities as such.

Kyofu chose not to wear his mask today his single natural red eye staring at the man while his single naturally black eye stared as well. These were assumed that after the test and experiments were ran on him his body went through some kind of evolutionary stage that did not seem to be complete. Of course like always Kyofu would have to look into it within the near future.

Salzem nearly jumped out of his skin when he heard someone screaming across the training grounds at him. He turned around slowly to face the person, ready to defend himself if need be. Zeefalvora let out a hissing noise and did a few false lunges at the stranger, attempting to scare him off but Salzem stepped in between him and her. The boy had a strange appearance to say the least, with one red eye and one black eye, he would stand out a tad in a crowd. He said nothing to the kid for a second, trying to decide if he meant him or his spider harm. He still hadn't adjusted to the strangeness of this place, so he was suspicious of everybody. A moment or two after the kid spoke, Salzem shook his head.

"No. I'm not. I am a traveler." Salzem sent a telepathic message to his spider and she promptly backed down, relaxing her muscles and scuttling up next to Salzem. "My name is Salzem. What is yours?"

A traveler! Does this means that the guy planned on leaving the village soon to go somewhere else. Out of all the wonders thought Kyofu as the man announced his name as Salzem. But before the man announced his name the spider did some false lunges, of course Kyofu wasn't scared seeing as he saw worse terror in life. He would walk up to Salzem quickly closing the 10 meter distance leaving only 3 meters between him and the two companions seeing as he did not know if the spider was to attack or not.

Smiling at the man Kyo would say " I go by many names but people just call me Kyofu or Kyo " he said, maybe this man could be of great use to him with training purposes." Hey Salzem, you are in the training grounds so does that mean you are in the middle of training? I've been looking for a training partner but it seems that everyone is busy " said Kyofu.

"Well... Zeefalvora was just in the middle of her training. Perhaps you can spar with her." Salzem said, looking down at the colossal arachnid. "Be careful though. She's tougher than she looks." If Kyofu agreed, Salzem would take a large step back, putting about 4 meters between them and letting Zeefalvora move forward. Zeefalvora would have the first move, looking up into Kyofu's mismatched eyes, she would send a wave of thoughts into his. Image: A giant black spider, eyes larger and more vacuous than space. Image: It tears into Kyofu slowly, savoring his misery, sucking out the fluids of his less vital organs. Blood and web everywhere. screams can be heard down the tunnel, or what appears to be a tunnel, followed by the tearing of flesh and more screams. Flashes of eyes, teeth, fangs, blood, organs. The giant black spider allows a single drop of poison to drip into the empty, bleeding cavity that was Kyofu's stomach. He would watch himself wither away, skin becoming whiter than paper, dryer than the sands of a desert. His eyes would sink into his head and dissipate. His blood would turn black and harden before blowing into the web of the giant black arachnid.

The whole process of this image transfer would only take a single second, but the images wouldn't stop coming. This would reduce Kyofu's speed by 30, leaving him open to assault.

After Salzem said his works Kyofu instantly got into his fighting stance. Two seconds, two seconds was all it took for Kyo to commence his attack as it took two seconds for the spider and Salzem to switch places. Before the spider even could balance himself as he switched places

Kyofu would only stared at Salzem as he said his words. Before they even switched places Kyo would say " Wait a minute now. I like to know my training partner before we train. Tell me a little about yourself, where you from, who your are and all those good things " said Kyofu while smirking. He needed to know what this guy was like before the each of them sparred, like when he was going to fight Lucian he didn't know the man despised fighting. If he did he wouldn't have asked the man for a battle.

He would continue to stare at the man awaiting most of the answers to his question.

Salzem stared back at Kyofu as he stared at him, figuring what felt was worth telling and what wasn't. Meanwhile, Zeefalvora pawed at the ground anxiously, obviously ready to dominate. Salzem noticed this and kneeled down next to her and rubbed his hand along her cephalothorax between her eyes with one hand, and with the other, gently stroked her underbelly. The combination of these actions cause her to mellow a little, but the stared at Kyofu with a gaze that could only be described as hunger. Salzem shrugged absently and stood back up.

"Well... I'm a traveler. I go from place to place looking for things, rather one thing in particular. Never-you-mind that, though. I was born in the leaf, but I am now here, so for now, it's home." Zeefalvora showed exceptional patients for a spider, glaring at Kyofu with her endless black eyes, but not exhibiting any aggressive behavior either.

Hrm so this man was from the village of Konohagakure, and it seems he was a traveler." So Salzem, you say are a traveler where exactly do you plan on going next if you don't mind me asking ". Kyofu needed to know since he needed someone who would direct him into the direction of Sunagakure. Of course it would be even better if the man Salzem was going towards the village. But that was only a tad bit of the things he needed to know. Looking at the man Kyo would say "Also if you do not mind, could you tell me of where you acquired your spider as well as if you could give me a large amount of her silk for experimentation. Of course if you feel as if that is hurting your spider you don't have to do it " said Kyo.

He actually didn't wanna hurt the creature seeing as it wasa creature of protection as well as that Spiders were very useful in the world. The direction that their webs were spun showed the way to South so if one was to get lost within a forest they could easily find their way out. Also if Kyo could acquire the silk of the spider he may be able to incorporate it into his own body making him more agile and less fragile.

"Well..." Salzem began. "I plan on going to the Sand Village next. Hopefully, I'll find what I'm looking for there." Salzem paused a moment. "I'll be leaving in a few days. I did a sweep of the village and discovered that what I'm looking for is not here. As for Zeefalvora..." Salzem glanced down at the colossal blue arachnid and she glanced up at him, unable to make out her expression.

"She's one of a kind," Salzem said, scratching the top of Zeefalvora's cephalothorax with the tip of his fingers. "As for the silk..." As he said this, Zeefalvora flipped up on her back legs and aimed the spinnerets on her abdomen at Kyofu. Before Salzem realized what was happening, Zeefalvora ejected 4 large balls of silk, aimed at Kyofu's torso. As soon as they impacted with him (Or with any surface) they would explode, covering anything around that surface in 30 feet of webbing (10 meters) at speeds of 30. The sticky threads would entangle and anchor, lowering anything that enter the web's speed by 30. Zeefalvora looked quite satisfied with her work. If Spiders could smile, he was sure Zeefalvora would be grinning like a mad-woman-spider.

"This.... This is art..." She said to Salzem via telepathic message. Salzem only shook his head and would move to help Kyofu cut himself out if he needed help.