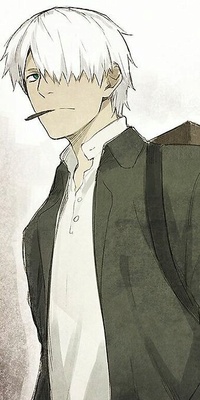 Branches whizzed by Ryota's head, nearly clipping his ear. He grunted, landing after a long leap out of a tree, and continued his run at a full gait. His calves burned with lactic acid but he pushed through, not wanting to lose track of his target. Pumping his feet off the dirt, the target finally entered his eye-sight again. A small, black cat with a white spot on its left eye. Just as he began to close in on the cat, it made an unexpected cut in the other direction, causing Ryota to slip and fall to the ground. Defeated, he laid back and kicked his feet up in the air, sighing in frustration. "How the hell could a cat be this fast?" he said to himself aloud. A noblewoman had lost her cat and requested a shinobi to help find him. Well, lost wasn't exactly the right word; she knew that the cat always disappears around the time of its annual check-up, and would be somewhere within the walls of her estate. So, since this morning, Ryota had raced around the estate, running in circles, to no avail. Deciding to switch up his approach, Ryota thought that basic ninjutsu could help him here. He summoned two basic clones, mere illusions, in hopes that he could scare the cat with the clones and corner it into running towards the real Ryota. Satisfied with this plan, he began to run again, with his two clones now, in search of this wily cat.

The cat was licking its paw, relaxing in a patch of grass; it seemed unfazed by any potential threat of danger. However, this nonchalance would be its downfall. Ryota sent one clone to jump down in front of the cat, while the real thing and the other clone sat in wait amongst the branches. Seeing the fake Ryota, the feline turned and leapt in the other direction, intending to avoid capture. Anticipating this, the other clone was ready in its path, and, again, the cat switched directions and ran away from both clones. Finally, Ryota's plan had come together; Ryota had positioned himself and the clones in a triangle formation, once the cat tried to evade both clones, the only direction it could go was where Ryota lied in wait. The young ninja jumped down from his perch, swiftly grabbing the cat and landing on the forest floor in one motion. While it did hiss, squirm and try to bite, this was nothing compared to the tribulations he had faced to secure its capture, so he paid this resistance no mind.

After making his way back to the main building of the estate, he greeted the noblewoman with her pet in hand. She immediately ran towards him, fiercely grabbing the animal from his clutches and hugging it tightly; the love being expressed did not appear mutual, judging by the cats expression. The noblewoman thanked Ryota fiercely, shaking both of his hands and sending him on his way. He sauntered off her property, en route to receive his payment.

If you could please link both the technique and the other thread using [url=*placeholder for link*]*insert word like here, here*[/url], and both the WC that was in the tech before, and after, that would be great. Thanks!