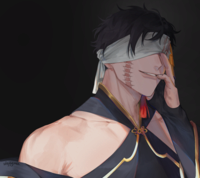 Yasahiro-kun spoke blatantly and directly to Garuda cutting his best friend to the core, dashing his dreams of them both coming bonding together over their mutual love of brining bad guys to heel and forcing their ideals onto the bad guys to change their viewpoints on the world to that of the both of them. There was so much that the brothers were meant to accomplish and do together and it all cam crashing down once it was mentioned that they wouldn't be traumatizing anymore bandits today.

You're a real party pooper ya know...Folding his arms once more he lowered his voice away from the male before speaking under his breath. You never let me have any fun, it's been that way for ten years now...


Garuda once again went into his own mind wondering about what it was he'd get to eat or potentially the payout for the services he had rendered to the village, maybe they'd make him a king, or maybe they'd give him free rice for his entire lifetime, oh or even maybe his estranged brother would welcome hi Minto his country with open arms to partake in all the riches! There wasn't much else that he was actively listening to until he heard Yasahiro mention they only needed one prisoner.


COPY THAT...the sword that had been stripped from the last bandit found its way into the males heart as Garuda simply pushed it forward not paying attention to the fact that his friend had recently just killed the other bandit as well via stomping the bandits throat. Letting the hilt of the sword go as the bandit slumped to the ground, dying. Garuda slowly turned around to see exactly what Yasahiro-kun was going to ask his prisoner. So what exactly are you going to ask your guy, mine was pretty qui-.....I don't hear your prisoner breathing..Looking towards where the thud of Yasahiro's victim should be and back at his victim now ran through he did a double and triple take back and forth to the bodies. Slowly Garuda moved his right hand back to the hilt of the blue removing the sword from his bandits body before quickly stabbing it back in as blood jetted out from the wound.


At this point Yasahiro if he had continued to walk up, Garuda would position himself between the body and his brother before turning around slowly.


No need to tie him up...errr maybe we call a medic? He might be salvageable? Garuda gave two thumbs up to his partner but facing purposely to the left of where the man actually stood.

Engaging crazy rarely went well, far better to ignore it. What harm would it do to let Garuda's delusions run their course? With any luck, the man would be halfway to Moon Country by next week, and the Komekage would never see him again. On the off chance, the blind man did decide to stay, well, then the samurai would cross that bridge when he came to it. Worrying about what might be would drive one to insanity, and Yasahiro had precious little sanity spare with leadership pulling him in every direction at once.

Before the Komekage could interject, the sword slipped through Garuda's prisoner like butter and sent a gout of blood into the air. The final death toll ticked up to nine, three innocent farmers and six less-than-innocent bandits—all dead for nothing now. The hope of retrieving some information died along with the last bandit. Nine meaningless deaths, nine new failures to add to the scoreboard.

"No, a medic won't do any good," the samurai halted his advance as the last feeble gout of blood bubbled from the bandit's chest. "He's too far gone."

"Regardless, thank you for the help, Garuda. It would have been much worse if we let them continue their raid. Are you sure you don't need me to take a look at your wound?" he gestured to the blind man's chest "I'm far from a medic, but a quick field dressing wouldn't hurt."

It wouldn't hurt too much anyway. Even the smallest of wounds—both physical and psychological—left some kind of mark. Perhaps such marks wouldn't be immediately noticeable, but the unwavering march of time laid all such injuries in one way or another. Indeed, every so often, Yasahiro even found his shoulder locking up on cold mornings, no doubt the result of repetitive training.

Garuda let out a sigh of disappointment, hanging his head in slight shame as he noticed that now both bandits would meet their maker before giving his brother any real information for him to gleam from them. It was a cruel turn of events, a horrible tragedy, a dark spot that fate had put on his relationship with his brother now. He was sure to be lectured for it, maybe even reprimanded by Yasahiro-kun and made to walk the outline of the village as his brother had done multiple times as they had grown up through the years when they were younger. At the mention that a medic more than likely wouldn't help with their situation Garuda moved the earth underneath his foot sheepishly  back and forth rolling his foot over a rock before kicking it weakly in the dirt as he continued to listen to Yasahiro berate him over his mistake.

"I know, I sorta messed that one up, I'm sorry bro...I just wanted to make sure you were proud of me!" Garuda spoke low while fidgeting with his fingers running them over each other before putting them into his side garb like pockets and pouting.

There wasn't much else he could say and he could tell that their interaction here was coming to an end and they would need to move from this venue as he assumed the villagers would take care of clearing the bodies and returning the village back to normal after this altercation. While he pondered how exactly they'd get rid of the bodies whether they burned them or they buried them he didn't know how small villages dealt with stuff like this, Yasahiro began speaking again thanking Garuda for helping once more.

A huge smile flashed across the face of the youngster as he was praised by his brother for the good work he had done and all the bad seemed to fade away from his mind as the praise kink he had developed across their time together. "I'm a good guy? I did a good job? You're proud of me?" Garuda inched closer to Yasahiro with his head tilted towards him waiting for a head pat and rub that was sure to follow the praise he had just received.

"Ugh, fine lets get out of here and I'll allow mamma medic to take care of my flesh wound if it'll make ya feel better bro. We can go somewhere else to talk about the particulars of my payment for this service, and how much I owe ya for the damage I caused as well."

"You did well given the circumstances, yes," Yasahiro admitted, though he came nowhere near the other man's expectations of head pats. "Now if you hold still I'll get you patched up."

Collecting a few unmarred strips of cloth from the bandits, Yasahiro would meet Garuda's advances halfway. If allowed to, he would wrap the man's chest in the strips, binding the wound and preventing further exposure to the elements. It wasn't a permanent fix by any means, but it would suffice until better, more professional medical assistance might be found. Interestingly, the wound itself did not seem nearly as bad as it had moments ago, perhaps it was merely a trick of the eye and the heat of the moment?

"Unfortunately, you won't find much in terms of payment," he nodded in the direction of Tanbogakure as he bound the blind man's chest. "We lack the financial resources of most villages so the best I can offer you is the same gratitude I offered you before."

Tying off the last binding, Yasahiro took a step back.

"That said, I'm sure if you finish off the work on that field back there those farmers you approached before

Glancing over at the corpses, Yasahiro knew what the rest of his day held. Informing families, digging graves, and burning the bandits; it was not a pretty reality to be faced with. However, it was the reality that everyone in the small settlement of Tanbogakure would have to live with until Zukumiki's shadow no longer darkened their doorstep.

Ah, praise. If it was one thing that Garuda would indulge in, it was praise from his best friend and brother of years past. He had always looked up to the man as a strong pillar of guidance and benevolence and with each word he spoke the young Kaguya clung to it with a faint smile on his face as he nodded in blissful joy. He allowed his partner to close the distance and apply the field medical services to his arm without interference, he knew the wound wasn't deep but Garuda assumed it would put Yasahiro-kuns heart at ease if he was able to take care of his younger half as they had done years past when they were both kids fighting off bullies often times bigger than themselves.

"Ah bro no worries on pay, I know you'd help out if the roles were reversed as well and I'm proud to be by your side and help with as much of the village life as possible. I think you could just feed me and we'll call our transaction done and done"

As Yasahiro backed away from  finishing up with the wound Garuda rotated his arm to see where his mobility was at before giving the thumbs up with a wide grin showing off his teeth and letting out a clenched laugh of success. Their jobs here were done and nothing else was to be said of the bodies, they'd return to the earth just s they had been formed and provide a great fertilizer to the land of rice for their next harvest or so Garuda had thought and he gave no more time to the idea of moving bodies and burying them. It was never a custom that had sat well with him and he didn't understand it, where you die is your altar and should never be moved as it told a story of your life, successes, and failures.

"Yea....you're right actually... I think I'll go back and finish what I started, ya know? We can meet up later bro, you can tell me how mom and dad are and we can share all the stories we've accumulated over the years."

A slight tear drop conveniently came at the right time from the hard sun beating into his eyes causing them to water as he spoke and tears to stream down his eyes as he wiped them during his speech. With a slight wave of his left hand he pivoted to turn around on his left foot as he marched a merry path back to the rice field they had begun this day at. He stomped off with hands out in front of him feeling for anything that might come and knock him in the head as his steps were spaced and hesitant walking forward, after all he was "blind" being crippled was such a chore. 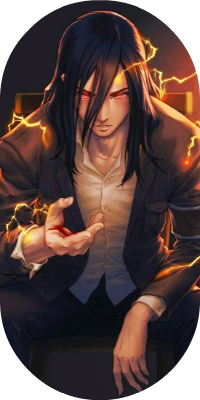