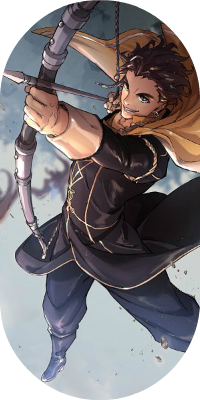 Stat Page : The quiver of knowledge

Clan: None
KKG: None
Clan Specialty: None

Kota approached the training grounds with only a slight amount of apprehension. Recently he has been having some issues when it comes to training like a ninja. He was unsure of his future path and was informed to try some stuff out other than archery. It was the only reason he dragged his body out of bed to make it to the training grounds. Kota was tired but refused to let the other ninja make fun of him and his resolve.

The training field that Kota chose was more of an empty room set up with some dummies. The dummies had seals on them that allowed them to measure emotional responses. It was pretty hi-tech as far as Kota knew. He was unable to understand the logic behind it as seal mark studies were never his thing. He only knew that they were profound and could give feedback on some basic techniques. The techniques he was going to try out came from a book his dad gave him.

Today is the day I try out genjutsu. I can spend the day trying it out and seeing if I have any talent in it. Compared to some of the other stuff this should be easier to check. According to the lecture, genjutsu is all about chakra control. While I cannot say I am the best, I am also not terrible at it. My main issue is that I lack a lot of chakra compared to the amounts that others have. I was informed that lower amounts make it easier to control but also easier to putter out. Kota was thinking to himself.

The man could only sigh at his meager abilities. When he was out in the wild he thought he was pretty strong already. When he came to Suna he learned that even a 15 year old could beat him in battle. It was an embarrassing feeling. The only way Kota believed he could make up for such an action was to become as strong as he could. Competition was in his nature. Even in the forest or on the dunes he would compete against his father. The one with bigger prey usually got to take the biggest piece of meat for dinner.

Putting his hands together, Kota started making hand seals. It was time for him to start working. He started with the ram, went onto the bird, then finished with the tiger seal. He was also trying to mold his chakra to release the genjutsu effect. When he finished he checked the dummy he was practicing on. Kota was only filled with a hint of disappointment since the jutsu did not work. Kota had enough confidence to try and focus on what happened, instead of the disappointment. It was a habit he developed from hunting. As long as he was alive he would try again.

Kota closed his eyes and sat in silent meditation. He circled the chakra in his body to see if there was anything wrong with the way it was flowing. He could not catch anything major. Of course at his young age and lacking the guidance of a teacher he would have a harder time. If he was properly instructed he would have been getting strong a lot faster. It was not that he could not ask an instructor to help. It was just that Kota was a strong believer in self sufficiency. A few pointers are fine but each ninja should find their own path. That and his bit of stubborn pride.

Meditating for an hour gave Kota some decent insights as to himself. I think my issue was in the application of the effect of the jutsu. Kota put his hands together and repeated the seals from earlier. This time he checked to see if any of the butterflies manifested properly. It was ineffective but the effort did not dishearten him. If anything he was optimistic another failure was just another chance to get it right.

Kota tried it out a few more times till he was required to rest. He felt like he was getting a grasp on understanding genjutsu. He just lacked the spark needed for it to manifest for some reason. Kota was practicing hard but was unaware of the effects that the genjutsu trials were having on his body. If he looked closely he would have noticed that his skin looked a bit smoother. If another person was present they may have even commented on how Kota was feeling more likable. It was like he was casting a genjutsu of sorts on himself in a way. It was coming about from the manifestation of his mistakes, as well as his natural disposition, and as his attitude.

Maybe my issue is not in genjutsu. It could be a mistake in this particular jutsu itself. Kota took out the jutsu encyclopedia he brought with him. Kota cracked open the book and leafed through a few pages underneath the genjutsu section. This jutsu looks like it could also be possible. Even if it is harder to use than the butterfly effect. If I am capable of using this one at least I would know the problem was somewhere in the last jutsu and not me. If not then I know that the problem is somewhere in myself. Either way the problem gets one step closer to being solved.

Ever the optimist Kota started with the new seals for this jutsu. First was the ram seal, monkey seal, hare seal, and donkey seal. The completion of the jutsu left him stunned for words. It did not work. It was another failure that honestly made him a bit frustrated. Taking a deep breath Kota calmed himself down before sitting back down to refine his experiences. As far as he could tell he did everything right. He looked back at the book before making a silent exclamation. The hand seals for this were pretty varied giving multiple options. He was contemplating if it could be the seal patterns itself that was causing him the issue. He threw the thought out when he remembered he had the same issue with the previous jutsu.

Trying to eliminate certain processes until he got it correct was a mission. He did not get the jutsu right even with all his effort. Kota decided not to give up on practicing genjutsu overall. He just decided it was time to try for a break and do some other stuff. Who knew when inspiration would take the moment to strike. Kota felt like it was a small issue of sorts that was holding him back.

Kota started flipping through the book again, seeing if there was any reason as to why none of what he was working on did him any good. Kota heard a knock on the door as his time up in the genjutsu training room was almost up. He decided it would be good to try training some more another day. As he walked out of the training course he noticed a peculiar look from one of the ninja in charge.

“Excuse me.” The man got his attention. “You were using the genjutsu practice room?” Kota shook his head up and down. “Would you mind standing still for a second?”  Normally alarm bells would be going off in his head. The only reason Kota was not as nervous was because the training grounds were busy. He would practically have to be as strong as a Kage to silence everyone and make it out untouched. If he was then he would have already Kota without asking him to come over.

The man examined Kota before starting to speak. His voice was a tad shocked and grim. “Did you practice multiple genjutsu with none of them working?”

Kota made a face and answered. “Yeah. Nothing I was trying worked. Would you happen to know the reason as to why?” He was trying to keep his response calm and leveled.

Touching his nose the man took a moment to answer. “Well the reason can be considered a blessing or a curse depending on your thinking. In rare cases when practicing if it is done wrongly genjutsu can affect the casters constitution. A very rare thing but not unheard of. When it happens it makes them more likeable and practically beloved. You just so happen to be one of the rare cases. Some people awaken it alone but the cause of this particular skill is up for debate. In a way while you were training to use genjutsu you trained to induce this skill instead.”

Listening to the explanation Kota was feeling a bit wronged. He did not mind having an extra trick up his sleeve but he felt like it was not what he was practicing for. “Thank you for the information. I guess it doesn't hurt to have another skill.” Kota explained his thoughts to the man before departing from the training grounds. Tired and ready to hit the bed and sleep.