Taking Care of a Garden (Mission/Private) 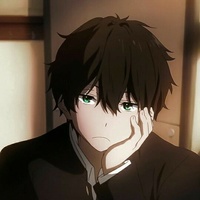 As Gin walked with Yuurei, hearing of the possibility that their may be others he would have to socialize with sent a shiver up his spine. He nodded his head to Yuurei, but he wasn't truly interested in creating a circle or even being in a circle with others. It was enough of a struggle to open up to Yuurei, though Gin doesn't regret doing so, but to open up to another person, especially so soon may be a bigger task than the Chuunin exam.

They both approached the woman and she presented them both a bag of ryo. Gin lightly shook the bag to feel and hear the jingle of coins from within, it felt satisfying being rewarded for a job well done. For a moment, his hands throbbed, and whenever he clenched his hands, they felt rough and pained a little. He had lost count about how many weeds he had pulled, he hid his hands, to avoid people asking him if he's alright. As it is, the lady seemed to be conversing with Yuurei more so than him, which is what he prefers.

And with that, the two genin departed after a gesture of farewell, well Yuurei properly gave his "Goodbye", Gin just nodded. "I could eat something" He agreed with Yuurei on getting a bite to eat, he wasn't aware he was hungry until his friend had brought it up, he supposed it was because of his nervousness about having to speak to someone.

"I'm alright for training tomorrow" He accepted Yuurei's invitation. Training would mean just the two of them and a chance to practice on their skills. So long as there won't be anyone else to join in and have to build 'reporte' with. The day was eventful, work with pay and no socializing.

Gin: feel free to make some claims yourself