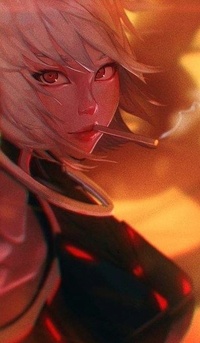 Her expression turned to one of slight disappointment and understanding as he refused her offer to eat with her that evening, she nodded in ascent to his decision and made no attempt to persuade him otherwise. He removed the apron nimbly, raising it over his head and squeezing it over the red mane that was so distinctly Kaito. The coy smile earned him a raised eyebrow and crossed arms but still no attempt to argue his choice. As he turned to go he waved at her leaving her with a final assumption of her calling on him for their next meeting - as he exited the building her face turned into a blank mask of contemplation, “Oh I intend to.”, she spoke these words aloud but to no one in particular. Reaching over she turned the flame off before striding around the counter and making her own exit.

As she too made her way back to her home she was consumed with her plans on training- because she was going to train him of course, though if he were smart enough he would realize she was gaining from this as well; the ‘what’ would be the real question. Katsumi knew… she knew that today had sealed their fates and was the beginning of the longest most undercover reconnaissance she was ever to engage in. How better to fight a foe when you can watch their progress day in and day out, when you yourself are teaching them techniques - all while building the trust. This of course was only to work if he remained to not be suspicious of her and if tonight's conversation was any indication he was questioning her… so she must tread lightly from here on out.

As she opened the door to her home and removed her shoes the family portrait that hung over their mantle caught her attention and she walked over to the painting - running her index finger over the raised paint strokes and wondered to herself - At what point exactly had she become this way? When did the little girl she stared at now get twisted into this version of herself.. And most worrisome of all, why was she not bothered by it. She gazed for a few more moments before making her way up to her room, readying herself for bed and nightly reflection.