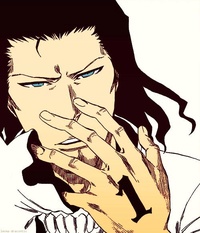 It was about time he made his move to Sunagakure. For some time he thought about this but made the choice, either way. He was happy. As he entered he proceeded to head to the nearby training field. It was time to get better and stronger whilst working on himself and the art of puppetry. The sun was glowing as he decided to take off his shirt. Not like any day, this one was boiling hot. Hashimoto placed down his puppet Eto whilst sitting down to meditate real quick, closing his eyes and focusing on himself only.

Taichi walked into the training grounds where he found a man meditating. He didnt recognize this man so he went about his usual means it dealing with new people in Suna, the land of criminals and bandits. He walked up to the man meditating next to a puppet and he was put off for a moment.

He had never met anyone that actually used the puppetry skill, he only had read about some who would use boduesbthat they found in battles that they would take the bodies and rig them up to turn it into their contraptiosn for war and play. He approached slowly, examining the puppet to the man's side.

He did not know whether or not it used to be human due to his lack of knowledge on the subject, he decided that he was going to play it safe with this individual. "Hey." Taichi spoke plainly, not with any animated speech patterns. He wanted to stop this man's meditation to speak to him about the art of puppetry, while he also wanted to know whether or not this individual desecrated a corpse by turning it into a puppet.

"That's an interesting weapon you have next to you. Mind explaining how it works?" Taichi would ask the broad question so he could continue by probing into the more direct and specific question. He would be 10 meters away from the man and the puppet when he asked this, trying to keep a semi safe distance from the possible enemy.

Hashimoto was in his own world as he thought deeply to himself. It was about him setting new standards and goals. With every breath he took, it was going to be as if it was his last day on earth. The whole surrounding felt as if he was welcomed, but when he took a glance to his right, noticing his puppet. Yes, it was known as Eto an ugly one-eyed, big lips at the same short beast. As a puppeteer, he wanted to be the best. But his goal was simply to seek knowledge from others and get better, it was about self-discipline and self-growth.

The twenty-two-year-old sat with both of his legs crossed deeply on his thought as within a moment a figure was seen. Whoever he was, Hashimoto didn’t panic. He stayed composed of whatever that has come into play. He meant no harm after all and was at the field just to practice and grind. He looked down as if he was going to do something, not knowing the figure of the presence of this man. At that moment he wasn’t meditating but simply was on the move to focus what was going to happen. He hoped it wasn’t dangerous, but with a slight nod. He eyed at the man ten meters away from him.

So he finally spoke, starting with a simple word. Something wasn’t right for Hashimoto. He felt this disrupted his meditation to a so call stranger. As he let out a sigh with a quick deep breath in and out. He would respond in a calm, easy tone. “How can I help you?” He would say as the man continued to speak, Motto looked at his puppet, Eto. It seemed the puppet was caught into the attention of him, Eto was his first puppet. A puppet where he would always carry. It was an E rank puppet as then responded.

“It’s a basic weapon, puppet something I carry all the time with me. Kind of baby puppet, I would say. It is known as Eto. Not special, but he has big lips and one-eyed and short.” He would laugh at what he said, then would continue. “He is powerless, but hopefully I will remodel a new version.” He stood up as then let out his right hand towards Taichi. “Hashimoto Yashida It’s nice to meet you, friend.”

The man began explaining to Taichi the puppet that laid next to his body. Taichi shrugged his shoulders and said "Oh. Pretty interesting." He watched as the man get up to his feet and walk toward Taichi, stretching out his right hand. The gesture was expected to be met by Taichi's right hand. He remembered the time that he had spoke with Kenshin. When he offered out his hand, and he just stood there and laughed at him.

Kenshin had given him a lesson in trusting others and how much trouble that can get you into. He rejected his hand on that day and he was urged to reject the man's hand here on the hot desert. He hesitated for a moment, but as he the man had fully outstretched his hands, he relied on his own sense of respect and met the man's hand with his own. He gripped onto the man's hand with his powerful grip, he learned that a lot can be read about a man by the strength of his hand shake. So his shake was one with strength, while at the same time not being overly aggressive to show that he wasn't trying to show off, only show the man respect with his handshake.

"What brings you out to the sands of Suna, friend?" Taichi would release the man's hand and place his hands into his pockets and would listen to the man's story with patience.

He watched as Taichi accepting his request with that shake. Hashimoto felt enlightened he would squeeze as hard he can attempting to test his strength and would smirk. It felt strange about for Hashimoto knowing that something wasn't right. but that instance he cleared his head and proceeded to eye Taichi. He told him who Eto was exactly and did not receive any punishment or so. A smile appeared as he gripped his hands aswell putting all his strength into it. In his mind, he thought this dude was a weakling but he kept his composure.

As he put his hands away, he sighed and let out a response after listening to what he said. " Just looking for a better life and somewhere where I can establish myself as a ninja. A new home and make friends I guess. How about yourself?"

Taichi thought about the child, and the fact that he was actually looking for him so they could actually leave this village and hit the roads, go to any place but here. He figured that this individual didn't seem to threatening, and felt that if he tried the boy could probably take him. When Hashimoto finished talking about trying to find a new place to settle, Taichi smiled and he began to speak. "Actually yeah, my charge and I are actually planning on leaving this village and hit the roads, see what there is to see. You are welcome to join us if you would like. Right now I am actually trying to find that little tike, he is quite ellusive. Meet us just outside the village if you would like to join us. See ya!" Taichi would turn and begin heading to the gates, hoping he would find the boy there waiting for him to arrive.

He proceeded to nod and head towards the gate.