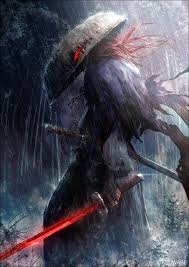 Basic Information
Age: 14
Birthday:  February 8
Gender: Male
Height: 5'7 | 172cm
Weight: 143lbs | 64kg
Appearance: Naoki is often seen wearing traditionally baggy clothing with a red scarf his mother left for him. He never wears any distinguishing accessories aside from it but somehow when he enters a room he always manages to direct all attention towards him. He looks skinny to most people due to his fashion choices but he carries quite a bit of muscle from his time in manual labour.
Personality: Despite his graceful, elegant and almost regal appearance and conduct, Naoki understands the value of the practice of hard work. Due to his own experiences, he had never had anything come to him quickly and this made him somewhat of an ideal son to have around the house. However, this resulted in him carrying an inherent distaste for all those that a fabulously wealthy.

He can come off as aloof and unapproachable due to the fact he shows his strictness on his sleeve but he can be carrying and even become attached to those that treat him well. Heis not above getting his hands dirty to protect what he cares about. He sees combat as little more than a means to an end but his new motivation to change his life and protect what he cares for caused him to want to become a ninja.

Likes:  Hardworking People, "Women exhibiting a motherly aura", Steady income and Nature.
Dislikes: Aristocrats and most of what they represent.
History: Not much is known about Naoki's past other than that he grew up among people that weren't biologically his family. He wasn't taken in by a singular person like most orphans but was instead raised by a group of construction workers, farmers and blacksmiths. No clan ever claimed him so the men deduced that either he was clanless or he didn't truly have an aptitude for ninja work like the rest of them. He was taught everything he knew growing up from the way he talked. dressed and even survived. Not one moment in his life was spent alone and he always had someone he could rely on, some more than others. Despite his seemingly rough upbringing, Naoki exhibits the grace of a noble-born person. His body shows an entirely different story as it is muscular and riddled with scars from his time growing up. B
Ninja Traits
Rank: Academy Student
Village: Kumogakure
Element(s): Earth
Specialities: None yet
Clan: Clanless
Bloodline Bonuses: None
Stats
Health:100
Vigour: 15
Chakra: 10
Speed: 10
Strength: 15
The Player
Other Characters: Other Characters Here
Faceclaim Name and Series: Okada Izou-Fate/Grand Order
Roleplay Sample: "It's 4:30 am and I have been assigned a mission to find some kids that were kidnapped around the southeast of the village" Naoki jotted down in his notebook. In case something unforeseen happened this book was going to be his legacy. The boys back home had put all their faith in him to become a great ninja. The task of showing how someone not born into greatness rested on his shoulders and his shoulders alone. It was time.

After doing a bit of detective work he was able to scout out the area that the kidnappers were using, he wanted to avoid just walking in and blasting all of his jutsu. This mission's most important part was ensuring these kids returned to their families in the best condition possible. After adding a full stop it was now time. His katana was readied as he carefully made his way into the building. There were numerous people here and multiple of them appeared to be fighters. These people spared no expense. They could easily use the kids as hostages so he needed to take them out systematically.

There was some sort of hierarchy here and he planned to exploit it. One of the people here is a middleman, You can't get away with kidnapping this long without some kind of mastermind, He couldn't tell from appearance alone so maybe it was time for a little bit of eavesdropping.

"If it was that simple we wouldn't have to go through all of this trouble now would we". a burly man said to a much skinnier but still muscular man. They seemed to be talking about how and when the exchange would go down. "Keeping them for a week is a bit much don't you think? Our wallets are taking a bigger hit than I think that guy can fix with his". The burly man damn near punched the smaller man's face off after he said that "Do not talk about children's lives like that, we do this because we must not for some cheap paycheck". The smaller man was stunned but managed to collect himself and muttered under his breath "Hypocrite".

This group of criminals had fantastic chemistry...regardless. After a bit more listening Naoki was able to discover both the location and identity of the "big bad". He was a human trafficker who was responsible for a bunch of other crimes in the underground. Illegal gambling rings, terrorism, etc. At least Naoki wouldn't have to feel even slightly guilty about taking him in. Before taking care of the guy he needed to secure the safety of the children first.

After crafting his jutsu around the children Naoki quickly jumped out from his hiding placed and blurred around the room incapacitating all of the abductors before they could notice him. He made an active effort to avoid killing them because last time he got in a lot of trouble for doing so. He managed to find the boss already running away and caught him without too much trouble. He handed him into the authorities and helped in the efforts of returning the children to their homes.

Here are some links to help get you on your way to finishing up.

Welcome to the Site and have fun RPing!