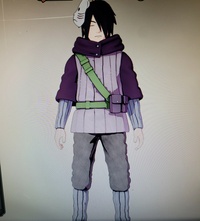 Appearance: Shizu is of average height and somewhat scrawny. His straight dark hair almost goes down to his shoulders. His face is usually in a nutral state of surprise or confusion hinting at his frantic and opportunistic nature. His eyes are honey colored and kind. His skin is pale as one would expect from someone native to the land of waves. Shizu is usually wearing a formfitting undershirt with long sleeves under a hidden mist tunic that covers his mouth, as well as standard issue trousers and footwear for a mist nin.
Personality: Shizu is usually the first one to mention when a plan isnt going well and always has his mind on contingencies and an escape route. People have descibed Shizu as a worry-wart or a scaredy-cat. In truth Shizu is simply concerned and only wishes to ensure the health and safety of his teammates and friends. Underneath the panic is resolve and a keen mind for medicine and anatomy. In a high pressure situation Shizu is capable of doing the right thing and fomulating effective strategy.

Your Story: Shizu Kohinata is the son of a mist village emissary and earth village diplomat. When it was discovered that the earth village ninja was pregnant, she appealed for a village transfer and was able to pull strings to get it. Shizu had a typical childhood and devloped aspirations to being a powerful ninja. When Shizu's mother contracted a fatal illness, Shizu spent a long time by her side being read books and playing quiet games with her. Shizu became fascinated with medical ninjutsu and so shifted his goals to thier study. Shizu graduated from the ninja academy at age 13, but his mother unfortunatly had passed away before she could see her son as a genin. Havning spent 5 years learning from medical ninja Shizu is now ready to put his study and training to use in the field.