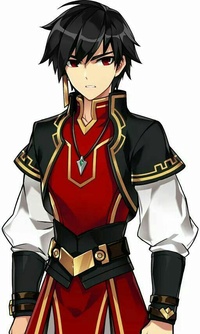 It was time for him to showcase his skills; the Uchiha was prepping the exam with his sensei. He went through the basics successfully, nourishing every Jutsu he required for the exam. But Ayyu was inclined to push the buttons and graduate from the exam. He gathered up other jutsu that weren't associated with the exams but favored being organized at all costs. He arrived at the class; he wore a sleeveless tunic, a long-sleeved white uniform, and a purple top with a red collar and had the Uchiha crest behind his back. He also wore a white belt and shinobi sandals.

All he could do was find a seat and sit down, waiting for the protector to call out his name. He was ready for the moment. Raiden had done this already , Just recently even. However seems the Academy was churning out new Shinobi every day now. Raiden would do his normal spiel. Calling in the names and judging their adequacy on usage of the techniques in question. Most did not pass his expectations. They would not know that until the end of all the exams however. He would eventually come upon a certain name " Ayyuken Uchiha" He would than go back into the room and prepare his pen and paper and looked up from his desk "You are to show the usage of Transformation and Clone techniques, Any additional techniques you have learned while as an Academy Student are bonus points. Now Impress me" and he would begin to watch for anything from the boy to prove he was ready to be a Genin of Sunagakure.

It seemed that everything had taken place now, and the Uchiha awaited this moment. The young kid attended to his name as he entered the room, bowing to the figure in front of him. He was to deliver the two techniques he discovered from his sensei, Kota. The Uchiha was forever grateful for this, but it came down to him now to provide the show. Ayyu realized something was off with this so-called protector, and his voice pierced his heart. But he stayed observant and preserved his serenity, knowing a legitable pass was on his way.

The Uchiha was here to impress the man in front of him. He was assigned to show him two of the basic Jutsu one must know. Ayyu was also permitted to show the other techniques he learned for extra bonuses. Ayyu let out a grin as he moved closer to the desk where the protector would see him performing Jutsu.

He knew the transformation tech was a tricky one. He weaved the 'ram' hand seal. The Uchiha's appearance diverted into his protector, the identical components of all of his body. Ayyu moved on to weave dog hand seals, forming four duplicates of himself. He wasted no time as he showed his different technique, surface walking. He recalled parodying his sensei, yet he wanted to show it off. Ayyu found a nearby wall close to him, where he leaped up to the ceiling, pivoting using the surface technique. He now awaited what would transpire.

Transforming into the Proctor, how original. Raiden would make his notes as the transformation was formed. He would get up and walk around after the show off did the Surface walking technique as well. Raiden noted the flaws, but it was easily missed things due to either the desk in the way , or Clothes mostly covered something. But all in all it was an acceptable clone of Raiden, he would not let it be known or shown in his face. Raiden would than look around at the clones to look for flaws now between the original and the clones. Again small details, but nothing he could truly complain about. And Lastly the show of use of Surface walking. Raiden was starting to think to add that to the list of needed things to show. He was tired of counting it as extra credit and letting those who would barely fail, pass just because of it. Though this person passed without it, was still the matter of the fact. He would not say anything to the boy as he would escort him out and call the next name.

After he finished with the last kid, since the Uchiha was so low on the list due to names going alphabetical by clan name. Raiden would than announce to the group of kids "I will now announce those who graduated, please step into the class room and stand at the desk when your name is called." Raiden only called a few names, greatly spaced out upon the list, this made those sweat that had yet to have their name called. he would even skip some names and come back to others. Leaving very last to call "Uchiha, Ayyuken" And with that Raiden would dip back into the room to hand out the headbands. "Congradulations on becoming Genin of Sunagakure do your village and Kage proud" and with that Raiden would walk out the front of the room to tell the kids better luck next time to the ones outside.

Raiden would decide to head home after this. Raiden enjoyed getting to help to add to the ranks of Sunagakure, he just hoped that the kids that he did pass would do well, as he was picky enough as it was who he passed on to the next stage.

Ayyu performed the tasks as the fellow protector instructed him to do so. The Jutsu wasn't near perfection, but it permitted the man to decide the outcome. He was escorted out to wait for the results, and the Uchiha was eager to know the results. Would he fail or pass? Nobody knew, not even himself. All he could do was pray and hope the results were a pass. As the names were being called, he was next up. Ayyuken Uchiha. He took a single deep breath and made his way in. The Uchiha was handed a headband and all the necessary tools required he got from the exam.

He was going to make his kage proud no matter what. The village and everyone, no matter what the solution, would be. He waited for this day, and therefore he got it; all he could do was smile beautifully. He stepped forward and received the headband, and nodded. The Uchiha saw the sensei dipping fast as he could. He established the headband on top of his head, grinning before stating. "Uchiha, Ayyuken is my name. Ayyu, I will make you proud, father." As he said, he disappeared from the room and headed home with a smile.

Congrats and approved for both