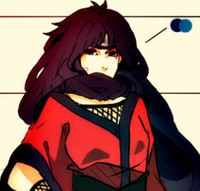 Gliding from the threshold of her home, the door shutting seamlessly behind her and sealing, Mei made her way into a nearby alley with the smallest of smiles on her lips. She'd enjoyed her lunch and the pastry that she could still taste on her tongue though ten minutes had already passed since she'd had her last bite. Eyes bright, she dipped into a crouch then sprung upwards in a leaping body flicker, putting her solidly on the roof where she spun on her heel--delight surging through her for once--and then took off running in a dash across the roof. As she moved, the wind whipping her hair back behind her, she felt the freedom that perhaps those with wind affinity might enjoy. Still, she had her own strengths. Pushing off the edge of one roof to land across the block on another, she performed several swift handseals, decreasing her mass--without altering her size--for a brief moment, before letting the technique fade as she landed in a roll and then shot forth once more.

Taking a breath, Mei channeled chakra through her body, moulding it over the surface of her hand subtly with earth before focusing it to a sharp point along the edge. Dipping into a slide, Mei let her sharpened hand scrape against the earthen roof, before she whipped the gathered sand and dust forwards in a single violent motion. The detritus flew through the air, infused with her chakra going over a gap far too large for even a shinobi to cross easily. Gritting her teeth, Mei performed several handseals and then released the technique as she leaped.

Rapidly, the chakra infused dirt and sand were bound together by a solid fractal of chakra, which she promptly landed on, took four running steps, and then leapt off of, shattering it. The chakra swiftly dispersed, returning to an energetic state as Mei landed in a brief slide and then pushed off once more. The buildings were getting shorter now, which was one of several signs that told her she would soon be run aground--not that it would stop her. Continuing on this way for several more minutes, Meiyaku eventually descended from a one-story building with the Surface Walking technique, before slowing down to catch her breath and wipe away the sweat that had accumulated on her brow. In moments like these, she wished that she had the wind, or perhaps water. Whatever would keep her cool honestly as despite having been raised in the intense clime of Sunagakure, she had no love for the heat. Walking past training grounds, Mei took note of those she saw in the process of training, many of them her senior--if not in years than in experience. Rather than being jealous, she admired them and indeed their efforts only buoyed her good mood.

She found that though it would be hard work in the harsh heat--with only the barest of winds--that she was quite looking forward to furthering her training. So it was that--on her way to the field--she began doing what stretches she could to further limber up. Things like that were important after all.