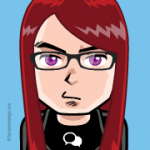 Age: 21
Birthday: April 21
Gender: Male
Appearance: Raven Uzumaki has sleek long blood red hair that reached to the small of his back. He ties up the back of his hair with a ponytail and has two long bangs from either sides of his face. He has clear purple/amethyst colored eyes. His pale skin has a vibrant unnoticable sheen onto it. His deep calm voice is often found conflicting with his androgyous athletic built body. He shows little to no emotions on his face, in fear of the enemy making use of his emotions against him. He is 181cm tall while his weight is 79kg. He prefers wearing black clothes all around. He is often seen wearing a Black Yukata, that was gifted to him when he was in the oprhanage by the matron, with a Black traveling Cloak, that  also sports a hood to hide his trademark Uzumaki Blood Red hair.

Personality: He is often thought to be a cold and careless, but that can be said as far away form the truth, as heaven is to hell. He is calm and analytical in every situation, and has a soft spot for children and is often found in the closest orphanage caring for them. He is seen to have shown emotions to only those whom he trusts and whom he is close to. He is seldom found excited by prospect of learning new fuinjutsu technques and/or ninjutsu. He is as oblivious as one gets in the matters of the opposite gender. He spends most of his time in a local library or roaming through the lands in search of adventure and secret ruins of clans long lost.

History: Uzumaki Raven was born in an unknown location and having been found by an orphanage matron in village of Waves. He was named raven by the matron due to an unnatural attraction of ravens to the young child. Raven in his early years found reading books calming and soothing to the soul, and thus was often seen reading a book rather than playing with the other kids. His thirst for knowledge being recognized by the village was then recruited into the academy of Namigakure(Hidden in the Waves), which was not well known, but  took to the values of the now destroyed old Kiri. His physical strength was always lacking, but overlooked by due to his unnatural stamina and his diligence for speed. One of his famous quotes from the academy was " Speed is the factor which decides life and death". During his years in the academy he would be found visiting the shinobi libraries whereupon he found the mystical art of fuinjutsu. He was so taken upon it that he dedicated his personal training time into studying fuinjutsu leading him to lack in strength.
As the years progressed, Raven was ostracized for not bending along with the flow. His non-existant social life led to him being bullied and him closing off his emotions to the outside world. His progress in calligraphy and fuinjutsu more than made up for the torture and hell that the academy was for the young boy.
As the years progressed Raven soon began researching fuinjutsu more and stumbled upon a bingo book whereupon he saw the clan name "Uzumaki". Seeing the blood red hair on almost all Uzumaki he started researching about the clan and coming to the conclusion that he was a member of it, thus explaining his inherent ability in fuinjutsu.
In the final year of the academy, the bloody games were called upon and using his motto speed is the key to life, struggled to outlast the Jonin Commander the village-leader had decided to use for examination. Outlasting the time allotted to the academy students, Raven successfully managed to stay alive. Other students were not so lucky, more than 20 students were killed that day. Seeing the dead immobile faces of his now ex-classmates, he was hit with reality. Knowing that he could've been one of those, or maybe he would have to do this in the future, he decided his future was not in Nami. Thus after exams ended he quickly went back to the orphanage, grabbed his almost non-existant stuff, a few books from the library and his pocket money he had stored, and made a dash for walls. Utilizing the stealth methods taught in the academy he quickly made his way out of the village, vowing himself to not return unless he was stronger. In pursuit for knowledge and power he started his long adventure and journey to roam the lands and find anything and everything that could help him achieve his true potential.

Village:None/ Ex-Namigakure(Made up this village and is almost non-existant, except for the plot and something related to water to suite this char)

Element(s):Primary: Water
Specialties: None as of now

Last edited by Uzumaki_Raven on Sat Jul 01, 2017 6:11 am; edited 10 times in total (Reason for editing : Edited to fit in with application requirements)

Hello there, I'll be the one handling your app today.

On your appearance give us a description of his clothing as well. As interesting as it might be, I doubt your character would start naked lol.

In regards to history I'm afraid you won't be able to be a missing nin from the mist village. IC the original mist village was destroyed three years ago and what was once Shimagakure became the new mist village. At the same time a massive storm wall went up around the island preventing intruders, but also locking everyone in.

As such if you were in old kiri you'd be dead. If you tried to escape from the current Kiri you wouldn't be able to and would be killed. As such you'll need to edit your history to have you escape from a different village. Preferably one that isn't real, you can literally make up a village name and use it instead.

Put rank as 'E' rank as 'Roaming Missing Nin' does not denote strength of any kind.
You only start with one element at the start and since you do not train the other until at least genin you'll need to remove the lightning element from the app.

E rank ninja do not start with a specialty, you can leave it blank or just type N/A if you would prefer.

That's all I see, give the app a bump when the edits have been made and I shall come back to give it another once over.

In regards to your clan, are you asking if you can have the bloodlines from the Uzumaki and the Hozuki clans?

Sorry but you can only have one clan bloodline at creation. If you can manage to acquire a Hozuki's or an Uzumaki's DNA you could always transplant that DNA to get some of the clan's bonus' but you cannot start with two no.

The coding colored your rank black, would you mind fixing that?

Edited. Gonna have to rethink Plan B.
Would I mind changing color? Please I'm so excited right now that I'll run 10km if you ask me to irl to simulate shinobi training

I'm confused, what do you mean by 'Mind changing color?'

You asked me to fix the black coloured rank.

Trial approved, but don't get too excited yet friend. You'll still have to wait for one of these lovely people to come by and drop their own approval on this.