Seeing as that his training partner had apparently disappeared in search of something greater than himself, that being his meal, Damon waited until the other two genin were finished with their own short fight before addressing them. He witnessed the blond one get punched in mid air, so Damon made a mental note to never jump in battle, despite having been training dynamic entry a moment before this particular training ground became flooded with genin. It never seemed to work for anybody, whether it be for an academy student or even one of the five kage. Jumping would cause one to be unable to change direction in midair and basically make oneself become a moving, albeit easy, target.

When Sora asked if they were going to continue, Damon was afraid that he would have to cut their time short. “Sorry, guys, but I’m going to have to go.” Little did they know that Damon still had to search for a place to sleep, unless he decided to sleep in the burnt remains of his former house. He considered for a moment asking one of the boys if he could crash for at least the following night, before ultimately deciding against it, as he barely knew the group and did not want to bother them. Therefore, he bid them both goodbye, especially since Sora seemed to be addressing Arugula specifically, you know, since Akemi left randomly for probably justifiable reasons. Anyways, Damon headed home or at least in search of one. He would eventually just wander the streets before remembering that he had the address of Hikari, and while it was not his intention to spend the night at her house, he could at least stop by and say hey or start training once more, after he had regained his energy. 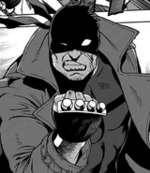 Arugula was rather surprised at after that short exchange, he really did not expect Damon and Akemi to both suddenly need to leave. Arugula would still be stuck in the genjutsu, but was not really affected by it. He did want to learn how to break out of them tho. He would first say to Damon, "See ya!"

After that, he would look at Sora, who was getting up now and say, "I would be fine to do that, but would you be willing to tell me how you are supposed to get out of genjutsu?" Arugula was really interested in figuring out how to get out of that. This would definitely be a problem. He would also realize that he would want to learn that tech that allowed Sora to move so fast. He would then say, "What was that tech you did to run at me quickly? Also, what is your name? Sorry if I missed it."

Sora nods at Damon as he left, a shame that they weren't to go on with The Arugula and him. Sora then looked at Arugula as he asked him all these questions, of course Sora wasn't against teaching. Sora then bows to introduce himself, as Arugula didn't remember his name. "I'm Sora Nishimata." Sora kept the genjutsu on Arugula. "First, I'll teach you how to get out of genjutsus." He felt more and more like Ayato as he taught, "Once you know that you're in a genjutsu, which you do, preform the tiger hand sign and rapidly flow your charka." Sora couldn't really show him, he hoped he would get it on his own. Sora weakened his genjutsu just a bit so it was easier to break. He still didn't know his peer that well to be able to determine his chakra level.

Arugula hear Sora’s instructions, and would try putting his hands into the tiger hand seal and rushing his chakra quickly. After a little bit of rushing, he would mess up, and still be in the genjutsu. For some reason, Arugula did not quite manage to get out of the genjutsu. He still saw all of those clones, although harmless, were still there, so he had to try again. Arugula would take his hands out of that tiger seal, and say, “I messed up, I think I will go try again.” Assuming Sora didn’t try to stop Arugula from trying again, Arugula would put his hands together and do the tiger hand seals again. He would rush his chakra again, and this time, he would see the clones disappear. Arugula was now pretty happy with learning that. He would hope that he would be able to do this in the heat of battle. He did not really get that in this fight, but he did at least learn about some jutsu. He would turn to Sora and say, “I think I learned that tech. Should we move on to the other one that made you fast?”

Arugula would pay close attention to whatever Sora was doing. Arugula was getting better at learning techniques, but he still wasn’t that good. Unfortunately, one does not get good at learning academic stuff overnight. That was something that he really had a bit of an issue with. He still was not good at studying even though he had graduated from the academy a little while ago. That was good.

Sora nods as the shadowy clones disappears. "Good job," He still had a expressionless face, "Now the body flicker." Sora put his hands in the ram position. "The point of the body flicker is to use chakra to get to point A," He then uses the body flicker to appear at a tree about 5 meters away at a speed of 28, "To point B." Sora then added, "The stronger your speed and chakra are, the faster you'll move to point A then to B." He knew that he wasn't very fast while using the body flicker, but he'll get there, at least thats what he tells himself. "Now, try using the body flicker to move to my location, we'll do it a couple time until you get the hang of it." Sora instructed.

Arugula would attempt to do this jutsu Sora explained. He would put his hands into the ram hand seal position, and he would soon come to the realization that he dose not actually know what to do with his chakra. He understood that he would be moving faster when he increases his chakra and speed, but of course, he had to figure out what to do with the chakra. He would tell sora, "I am not totally sure what exactly you do with the chakra." He would keep watching Sora to hear what Sora has to say or do about it.

"I am not totally sure what exactly you do with the chakra." The Agurgla then says after trying. Sora nods, "I want you to use the chakra threw out your body, boosting your speed with the chakra you have used, do this at point A then throughout to point B." Sora lays against the tree he was near, waiting for the genin to appear beside him.

The Arugula would try to think about how he would use his chakra since sora somehow knew how to do the jutsu, since he actually did not know how to use his chakra to do it. Arugula would make a guess that the tech required the Arugula to use his chakra to push himself forwards. He looked for a way to make his chakra move forwards. He guessed that he would try to make his chakra blast out behind him as quickly as possible. He would then attempt the ram hand seal, and this time, he would move forwards, and crash into a tree. Although it would hurt, he would not be seriously injured. He would get up and tell sora, "I think I got it, I probably should practice it more."

He would get up and do the same things a few times to learn about this technique. This time, he would make sure that he would not be facing a tree when he attempts the tech. He would attempt to do this again, and this time, it would go slowly. He would soon realize that this tech had a few drawbacks such as the inability to do anything whilst he moves. He would also realize that he could only do it for about as fast as he could move in meters. That all was good to know. He would then ask Sora, "Do you think that there is more to know about this tech?" He would listen carefully to Sora. He was slowly getting better at learning this stuff. It seemed that when he did not have some kind of time limit, it was much easier to learn this stuff. He would think about what he might have to do later. There was a poker game to go to later.