Stranger in the Upside Down (open, nk) 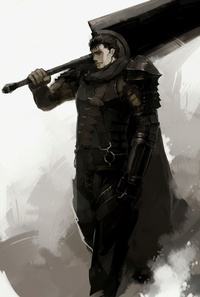 Now that their dues were paid, Nobunaga would push himself up off of his seat as Yasumi did. Adjusting his cloak so that it would drape over his shoulders once more, it would conceal the entirety of his body as it usually did. Gazing down at the shorter Yasumi, the Hiyu silently nodded his head, waiting to see what Yasumi's last favor was. Nobunaga grunted playfully, his version of a chuckle. He could see Yasumi was shy in revealing that she was afraid of the dark, made evident by the blush in her cheeks. "Fear of the unknown, the most basic of human instincts. Something you will overcome in time." Making note of how common fear of the dark was and that it was nothing to be ashamed of, Nobunaga would answer "Aye, of course I will walk you home." Shifting his stance to face the road, Nobunaga would give a little shake of his head in the direction of the street and said "Lead the way."

Once Yasumi started on her way, the silent sentry would gladly follow, acting as her guardian on this late afternoon. As they trotted down the streets of Kumo together, Nobunaga would inform Yasumi of what the future held for him. "For now, I wont be able to aid you in your training. Part of my duties as a new and higher ranking shinobi in the Kumo forces is to patrol the surrounding territories under their control. Kumo owns vast swaths of land and neighboring villages, which takes a lot of man power to monitor and keep under check. Ill be gone for a while. But fret not, when I get back I will be there to train you, make sure to mold you into a good and proper kunoichi, so that you will no longer need me to watch over you." Glancing down at Yasumi, Nobunaga would finish "But I will still be there to watch over you nonetheless."

She would nod at his statement about darkness. Funny thing was that she did not mind it because of the dangers lurking inside it, but from the memory, concealed inside that cave under that rock, unable to move and in pain. Instantly she would reach for her arm and flinch a little. It hurt some times without something there to hurt. Still sometimes it came back out of nothing. When he would take the notion to be her shadow and make her lead the way. She nodded at him and would start walking in front of him once in a while looking back at him with a smile on her face. She was in good spirits, because her day had turned out to be a nice one.

When he started talking again she would look over her shoulder at him and slow down a little. He was a high ranking Shinobi with a lot of duties to him and as he phrased it he would be gone for some time longer. A little worry made its way onto her face as she would look up at him with a sigh. "But you promise to be careful don't you?", she would raise a finger at him and give him a cheeky grin, "If something is happening to you, I will be coming to get you and this will become mighty embarrassing believe me." She knew the threat was weak but she did not want something to happen to him after all.

As it seemed he did not as well, because a promised to be back and train her, see to it, that she would become a proper Kunoichi. She would smile at that thought becoming a reality. She wanted that too and today she had come a little close just by accident almost. She would look up at him once more and almost radiate happiness at him: "Thank you Hiyu-san it feels good to know you are either out there or in here, because from now on you will where ever your body is, also be here", she would point to her heart and add, "I will make sure to pray for you every day so that when we meet again more happiness can be shared."
She would stop in front of the small apartment house in which she and her brother had their tiny flat and look up. "Here closest to the sky is where I live, when you are back stop by and see me or at least leave me a message?", she would tilt her head at him.

Following from behind Yasumi, the Hiyu would keep pace with her while keeping all of his sense on high alert. The sun was setting and soon the mischievous behavior would begin. On the look out to make sure nothing hampered their path to Yasumi's home, Nobunaga would look down to see Yasumi turning to face him, full of worry on her face. It appeared she did not entirely like the prospect of Nobunaga leaving the village for an indefinite amount of time. Nobunaga slightly grinned as he watched the young Kunoichi threaten him with a raised finer. "Aye, I will be careful." Making sure not to say the words 'I promise' for he did not believe in making promises he could not keep, especially after he was unable to protect his home from destruction. Anything could happen while out in the field and if he had to put his life on the line than he could not make a promise not to do that. "Do not worry, if anything is to happen there will be other's that I can call for backup. No need to get your feet wet, just yet." Being an Anbu, Nobunaga possessed a tattoo that he could press and communicate with other members of the Anbu corpse.

He would silently listen and follow her path as she went on to thank Nobunaga for being her protector and guardian, both in actuality and in her heart. Nodding to show he accepted her thanks, he would go on to say "Than you, Yasumi-chan. You have given me purpose once more."

At last, reaching her apartment complex, Nobunaga would come to a halt. Having memorized the path here, now one of the only parts of the village he fully knew, he would be able to keep an eye on Yasumi having also memorized her chakra signature. "Aye, I will come here once I am back from my rounds. I dont know how long I will be gone, but if ever you feel I am gone for too long, seek out Kyson Hozuki. He is my commanding officer and he will inform you of my status." With the mention of his leader, Nobunaga remembered that before this unlikely friendship had formed he was actually seeking out Kyson. Now with Yasumi home, he would be able to continue doing that. "Speaking of which, I must go see him before my departure." Gazing down at her he would continue "It was a pleasure meeting you, Yasumi-chan. Till next time." Standing tall and ever watchful, he would wait for her farewells and then waited for her to enter her apartment building before making his way down the street , to continue on with his new path and forge his new destiny.

She would listen to what he had to say to her. Kyson Hozuki she had to remember that name in case she was growing worried about the huge Shinobi gone missing or something. So at the end she would salute him with her hand raised to her temple and smile at him. "I will be happy to see you back here alive", she would beam at him and bow again. Then she would turn and walk upstairs to get into her flat without any further problems.

2000 WC for Incomplete performance of a hundred puppets