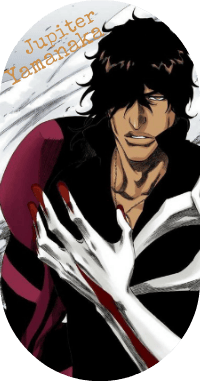 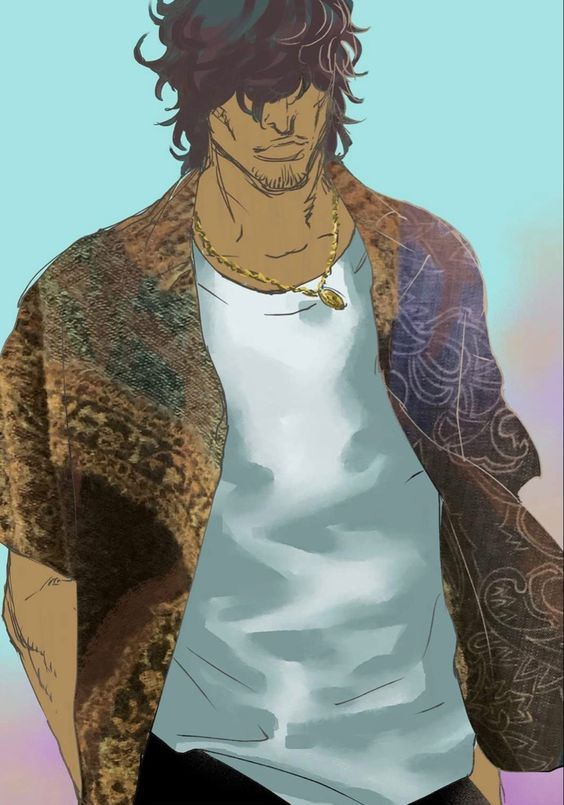 Appearance:
Jupiter wears long, dark hair, his bronzed lean body covered in scars inflicted by his Jashinist foster mother, and a heavy robe. He has thick eyebrows, light blue eyes reminiscent of his mother's, pleasant cheekbones and a sharp jawline. His nose is slim and long, and his ears pleasantly adorn the rest of his facial features. He is variously clean shaven, with a moustache, or a light, or even heavy beard. Jupiter stands at 6'1, slightly taller than the average shinobi, and maintains a lean but muscular frame. On both of his palms, Jashin's insignia is tattooed in white ink.
Personality:

Jashin's Puppet:
Jupiter is an extreme realist. He is extremely self-aware, to the point of psychosis. His tendency to overthink his own thinking, grants him the ability to think of nothing at all. He only believes in things that he can perceive, and has a tendency to look at his predicaments in a detached, objective manner without letting his emotions intervene. His fractured mind is the product of years of torment from the God of death and destruction. Having witnessed the powers of Jashin firsthand, Jupiter's life is analogous to walking on a tightrope. Although his capacity to feel fear has been diminished with the onslaught of extreme oversaturation of fear hormones in his years of torment, he treads carefully knowing that one wrong thought or decision could anger Jashin into punishing him once again or worse, causing harm to his little brother. In his natural state, Jupiter is a pacifist who would look for solutions to conflict that do not involve violence. Despite his troubled upbringing, Jupiter is trustful of other people and strives to see the good in every other individual.
Jupiter's carnal desire is to be free. This is indicated when he took his own life before Jashin to escape his possession. When he was immediately reincarnated - his realist nature allowed him to accept his circumstances. Jashin, it seemed, had moulded  Jupiter's life from the beginning to force him into servitude. When exposed to blood - be it his own or his foe's - during any form of combat, Jupiter catches a form of bloodlust channeled from Jashin himself. This occasionally makes him sadistic and overly eager to spill more blood. Jupiter recognizes this as a form of coping mechanism that he had invented to temporarily align his interests with Jashin's to nullify the looming dread and fear perpetually imposed on him by his captivator.
Jupiter enjoys the company of other people, but does not let it be known in fear of Jashin possibly taking the freedom to harm them too. He finds it difficult to relate to most people. Besides his thoughts on people, and the extra care that he takes to avoid getting attached, he is also doubly careful with his own thoughts. He is haunted by Jashin whom he can hear commenting on his every thought. This makes Jupiter instinctively follow along the path where his interests and Jashin's overlap. They most often coincide when Jupiter is in combat, or when he finds reasons to get stronger.

Your Story:
Another One Bites The Dust
Sunagakure Chunin Exam: Jupiter vs Karo vs Kin
Redemption in the Echo of Shadows
Your Missions: