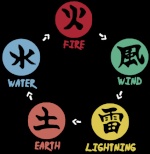 ----------------------------------
"Three, just three. Why only three?" Tashara thought, his face red from opening the third celestial gate, "why can't I get four?" And the answer was obvious. He needed to keep training. This was his attitude towards everything. If he trained hard enough, he could achieve his goal. He started running around, at lightning speed with the third gate open, and came to a halt.
"Fourth gate, OPEN!" he shouted. But, nothing happened. He willed himself to push his limits, pleaded to his brain, but it was to no avail. For the time being, three would have to suffice. He ran, almost reaching the speed of sound, trying to push himself harder to get the fourth gate to open. He could feel it almost opening, but something was stopping him from fully opening the gate. To him, this meant "try harder, run faster". And that is just what he did. He was turning the training ground to rubble, but he was going to fast to notice this fact.
"Yes, just a little bit more" he said. But in to outsiders, because of his speed, it sounded like "Yss jsalllbmeree!". The fourth gate was opening some, and he felt power surge through his body, pushing the normal limits of his body and mind. His feet were bleeding, but he could hardly take time to think about this, considering he almost had the fourth celestial gate open. And just when he thought he was about to open it, he collapsed.
The next day, he woke up in the hospital, with three nurses looking over him.
"Wha- what happened?" Tahsara asked.
"A fellow shinobi found you unconscious on the ground, and figured you had been training too hard. When we brought you here, you had three broken ribs." the nurse explained.
"NO! I have to keep training. I had almost opened the fourth gate!"
"Just another day, then we can let you go." And so he waited, for what seemed like forever, and finally got back to the training ground.
"Gate one: OPEN! Gate two OPEN! Gate 3:OPEN!!" Tashara screamed, straining his body to withstand this kind of speed and power. He began running, faster and faster, bleeding and sweating, trying to get the fourth gate open. But all his attempts were in vain. After a day of no success, he tried asking one of Might Guy's descendants, who could open five gates.
"I can easily open three," he explained, "but the fourth one just won't open."
"Hmm..." he began, "Fight me"
"What!? Are you crazy? What's that gonna do?" Tashara exclaimed, but apparently, this guy was serious. He came at Tashara with incredible speed, nailing him right in the gut with a punch. Tashara took out his sword, and charged back at him.
"First gate:Open!" Tashara said. If he was gonna beat this guy, he needed to use at least three gates. "Second Gate: OPEN! Third Gate: Open!!" Tashara lunged out with his katana, and connected a glancing blow. Immediately after, his foe grabbed Tashara's arm, and twisted it behind his back.
"GRaaahh!" Tashara screamed in pain.
"Yes, that's it, feel pain, feel weakness. You can't win, and you know it." At that point, Tashara had a kunai at his throat, and was literally about to die. It was then that he vanished. Well, not so much vanish, as move at superhuman speed, out of the way. The fourth gate was open. Although this should have been a time to celebrate, Tashara had to focus on keeping the gate open. It was no use if it could only be held for a few seconds. He zoomed at the enemy with his sword, and cut through him with alarming force and speed. His job here was done. He finally figured out what he had meant. Only through circumstance, could the fourth gate be unlocked. Now, it was just a matter of doing it at will.

The next day, he went back to he training ground, excited after yesterday's discovery. It was a fairly cool day, with a gentle breeze rustling the leaves on their trees. Tashara quickly opened the first three gates, and willed himself insanely hard to open the next, fourth, gate. He soon discovered that he had opened it, but that his power was draining fast. Really fast. At this rate, he was going to get knocked out in no time, so he lay down on his back, and breathed deeply. There was no way he could do this if it meant draining his power like that. He then realized that he could train in gate three, and get better at that before using gate four a lot.
"Gate Three-Open!" Tashara yelled. He trained hard all day, running laps and attacking dummies, and at the end of the day, he went home and slept like a log. The next day, he felt stronger than before, and when he opened the fourth gate, he ran for a whole hour, and was still going strong. This is great, he thought. Now that he could use the fourth gate, he would be much stronger in battle. And now, as celebration, he was going to run 500 laps on his hands.
"400, 401, 402...ugh!" Tashara passed out at 402, and then woke up two days later in the same spot. Fortunately, he had no broken bones, and was ready to try again. This time, he went to all five hundred, with the fourth gate open.
A few days later, he tried to open the fifth gate, but failed miserably. He was going to need to train twice as hard for the fifth gate, or he could just take a break. Nah, he thought, I'll do it next week or something. But today, he just went out for some ramen, and crashed in bed.
"Just another weeks work, all done. Time really does fly when your training... I think the fourth gate will definitely win me some battles, or at least help me with my missions."