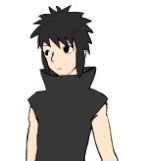 Shin awoke to see the clock glowing back in his eyes it read "3:00" Shin looked at the lower right hand corner and saw the letters "AM" he sat up and took his left hand and made a fist and rubbed his left eye then right. A long yawn came from deep within Shin's body. It sounded like the roar of lion. He then stood up and walked over to his dresser and pulled out a shirt and some pants. He pulled the pants over a pair of solid white boxers. He reached down with his right hand and grabbed the zipper pulling it up so the pants were snug against his side. then he put on his solid whit T-shirt. He walked over to the door not feeling hungry this morning as he got to the door he grabbed the pitch black jacket and unzipped it putting his arms in the sleeves then re-zipping it over his torso. He then reached out with his right hand and grabbed the doorknob turning it left then stepping forward to open the door. On the way out he kicked the door behind him to shut it. He turned and ran down the stairs looking around then smiling at the world as he threw his keys behind the desk once more then left the building. Shin slapped both hands together then used the Body Flicker Technique to transport himself to the training grounds gate. He then walked in and looked around letting the sand armor seal around him. He then slapped his hands together once more then slammed both palms on the ground. Then corpse's from those who had died before began to rise out of the ground. Shin jumped up on to a pole sticking 8 feet in to the air and waited till thousands of corpses were swarming around the pole trying to hit him. He jumped out 10 yards and landed facing the corpse's. He then laughed so they all turned and faced him they began charging at him using basic taijutsu against him causing Shin to have to use his speed enhancers which tripled his speed. Then he began destroying each corpse with ease but every time he killed one another appeared to take its place. He continued to fight his way out. He felt the sand cracking and drifting down from on his face he knew that they would eventually break through and strike him that's when he sprinted through them then stopped and turned watching 30 corpses turn to dust. He turned back to see the corpse's responding in front of him he turned to see the others sprinting at him. Shin began to get worried due to the sand falling off of him that's when Shin remembered that he could cancel the jutsu if it got too bad. Then his smile returned and he sprinted into the crowd of corpse's slicing them in half with the kunai in his right and left hands. He saw them turning to dust only to see the same ninja corpse's spawning in the same spot. He smiled and continued to run in punching the corpse'd making them explode in to clouds of dust. He then released the jutsu. Shin turned and pulled out a kunai and drove it in to his left knee cap trying to penetrate the layer of sand. He then lost his smile as the kunai flew to the side and hit the ground. He stood straight up and looked around only seeing open emptiness he felt a moist substance accumulate under his eye he wiped it into his left hand and stared at the tear then decide it maybe time to leave. He turned and walked away leaving the training field the way it was when he came.