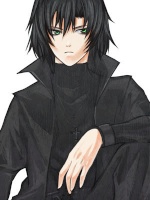 Sokizu had become a genin only a week ago, and the thrill of it hadn't worn off yet. He'd yet to be assigned a squad, so he wasn't officially a genin, but it felt great all the same. He sat on a branch of a large tree overlooking one of Konoha's many streets, fumbling with the headband wrapped snugly around his forehead. From the higher altitude of his perch the air was crisp and welcoming, the sun glowing in its dazzling brilliance. It was days like this that gave him the serious urge to train. Pushing off with his hands he dropped the ten or so feet to the ground and began walking towards the training grounds with his hands behind his head.

When he approached the training grounds he assessed his options, as vast as they were. Up to this point all he had learned were a few of the basic techniques, and he doubted their usefulness in battle. Surveying the area, Sokizu saw that there were numerous trees around, which gave him an idea. He had seen higher level shinobi able to walk up flat surfaces, and heard that they usually started by walking up a tree. Now that, that's a useful skill, and how hard could it be? All I need to do is put some chakra on my feet. He thought to himself, walking up to one of the nearby trees.

He set his right foot on the center of the tree, and started focusing his chakra. When he thought he had enough he lifted his other foot up a little bit, and to his shock he stayed on the tree. Seeing himself standing upright on the side of a tree must have got him a bit too excited, because his foot suddenly overcharged itself with chakra. He was launched backwards a bit and landed directly on his butt with a grunt. With a bit of a rub on his behind he sauntered back towards the tree, and saw the indention of his foot when it launched him.

Okay, be calm this time; control is key.

Kahli is walking through the training ground when she see's Sokizu trying to climb the tree, she smirks when he falls down. Watching she see's him go to have another go at climbing the tree. Kahli looks around for a tall tree deciding that she would try to. She see's a tall smooth barked tree not to far away. Taking a deep breath to relax she focuses on sending her Chakra to her feet. Running forwards she jumps up on the tree eyes widening as she manages two steps. Suddenly she falls backwards losing her concentration pushing off she lands on her feet.