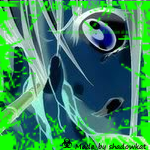 Kyoki blushed softly and smiled lightly when Aku hugged her.For a moment Kyoki was too shy to do anything, but after a few seconds she gently wrapped her arms around him, hugging back.When Aku let her go, she to wiped her eyes softly with the cloth bands on her arm."I-i know Aku, I just can't help it."Kyoki answered sadly.Kyoki felt bad for making Aku feel sad, it was if all she could do was make people miserable.

Kyoki closed her eyes for a moment, realizing Aku might have to leave. The thought almost brought tears to her eyes again as she opened them. Kyoki blushed darkly when she saw how close Aku's face was, and she realized he was trying to kiss her.Kyoki wanted to turn away she wasn't ready for this, yet some part of her told her she was.

Blushing lightly, Kyoki gently leaned forward and kissed Aku softly. Kyoki felt the butterfly feeling as her heart beat raced. She for once felt happy, no it was more than happiness, she was feeling pure bliss. Never in her life Kyoki thought she would fall in love, but here and now she had.

Akuhei's lips slowly moved away from Kyoki's, opening his eyes as he did it. "That was the first kiss I ever had and it was really good" said Akuhei, in a soft tone of voice. His voice sounded as if he was still admiring the kiss and everything about it which he was. Akuhei stood up from sitting on the dirt and grass. He wiped off the dust and dirt that had got on his pants from sitting on the ground. Akuhei didn't want to do it but it was time for him to leave. He would have to focus more on training and controlling the Bijuu a little bit more. Which meant it was time for him to travel to Kumogakure to meet his cousin, the Two Tails. "Well guess.. I.. have to go for now but I will return back to Konohagakure later on once I finish my training, I kinda cant disobey my dad rules because he would be heated, all he's trying to do is turn me into some type of strong shinobi he says" said Akuhei.

Akuhei walked over to the tree to grab his black book bag that was rolled over on the ground and not laying up against the tree anymore. He held his book bag by one of the straps. Akuhei turned around to the entrance but he turned his head around but not his body. "I will be back" said Akuhei. He blew a kiss to Kyo, showing that his love would return. Akuhei walked out of the Training Grounds and back into the Konohagakure City Walk way, he left but his presence would still be remember by her.

Kyoki smiled at Aku's words before he mentioned leaving. When he said that Kyoki just about cried again.It was too soon, after all they had just gotten to know each other.Kyoki scrambled to her feet, nearly tripping as she watched him walk away.Kyoki felt as if her heart was being torn out even though he promised to come back to Konoha. Standing completely still as she watched him walk away, tears fell again but she wouldn't let that stop her.

Snapping back to her senses Kyoki grabbed her things and strapped her pouch back to her side before taking off after Aku. She wasn't about to be left alone again, besides she had a Bijuu that she needed to learn to control. Kyoki pushed herself to follow him."AKU WAIT!" Kyoki shouted as she followed pushing though the crowd of people to get to him.

Akuhei walked slow in the crowd because of how slow the enormous amount of people in front of him walked. The Boy stood out from all the other people around him, he had looked different than every one because of his non-shinobi attire and his non ordinary spiky hair. Akuhei had his head down as he walked away from the Training Grounds, thinking about Kyo at every moment he walked even further. He wasn't very far from the Training Grounds because of how slow the crowd moved. This meant he could still hear things around him with all the other people next to him talking. A voice had shouted out his name. The only one he knew who would shout out his name in that beautiful voice was Kyo.

The voice that shouted at him was someone telling him to wait the voice sounded very familiar, like the one he was hearing most of the day. Akuhei stopped walking and turned around to see who was calling his name. In the way as he looked, he seen people being pushed out of the way and thrown down like Training dummies. This girl had some strength to be able to push all of those people out of the way.

Akuhei was surprise to see Kyo with her book bag and everything from the Training Grounds that she had brought. It looked as if she was going to Kumogakure with him. "Your coming with eh?" said Akuhei as he smiled. He was excited to see Kyo finally coming to her senses to see that she would have to come anyways to train the Kyuubi.

Kyoki looked at Aku and smiled, dusting herself off a bit."Of course I'm coming with you, no one else wants me here anyway."Kyoki answered with a light giggle.Kyoki gently grabbed Aku's hand when she got close enough, so as not to lose him in the crowd.Kyoki's gentle face held a determined yet cheerful look as the two stood among the crowd.I'm going where ever Aku's going, even if its across the countries. Kyoki thought to herself confidently.

Kyoki was determined not only to stay at Aku's side but become stronger emotionally. After all she didn't want to break down all the time. It seemed weak and kind of pathetic to her now that she thought on it.With a light smile she tugged at Aku's hand lightly trying to pull him into walking."Come on lets go, it'll be fun."said Kyoki happily.

Kyoki wanted to go, and leave her bad memories behind for now.Maybe one day she'd come back but for now what she wanted was an adventure.Traveling and training with someone that actually cared for her, as much as she cared for them.

Akuhei smiled at her. She was going to go with him and leave the village of Konohagakure. Akuhei had thought that the Kage would end up searching for her and request her back to the village because she was their valuable Bijuu. But Akuhei was still happy that she was going. He was just worried that Konogakure shinobi would maybe hunt them both down and Akuhei hadn't felt like fighting in death situations at this point in life. A boy like him was interested in Training and becoming stronger to master more techniques, not dieing early on in life. This was the one thing Akuhei had in his personality was fear to everything but one day he would learn to over come it.

Akuhei walked with Kyo, still holding her hand. He looked over to Kyo and smiled at her. "Okay look where going to the border entrance to go and meet my brother, and cousin because they are holding a Uzumaki meeting but you won't be able to come inside because it would fry anyone without Uzumaki blood so this means you will have to wait for me too come out, it won't take long" said Akuhei. Akuhei and Kyo passed through the village entrance, still holding hands in love. It was love at first site.

Kyoki smiled at Aku, and followed happily as they walked towards the entrance of the village."it's okay, as long as you come back I don't mind waiting outside or whatever."Kyoki answered. She had love, and that was all that mattered now. Kyoki didn't even take a backwards glance at the village as they passed through the gate.Kyoki was glad to leave.