***SUCCESSFUL TRAVEL FROM "KAITO'S KAMUI" DONE HERE***
Kaito and Raidomaru arrived in a spiral of space-time distortion from his Kamui dimension back to his home in the village of Sunagakure no Sato. The place that they landed was all too familiar to their memories, yet a place that Kaito had not been to for what his body perceived as six years thanks to his time in the villages' Hyperbolic Time Chamber.

"I'm home..." He said to nobody in particular; a sincere and grateful smile upon his lips.

Raidomaru hopped out of the collar of his shirt and ran into the kitchen to grab a bite to eat. The poor thing hadn't eaten for a long while, same as Kaito, while he recuperated from the first usage of his right Mangekyō Sharingan's ability to teleport between worlds. The boy still felt terrible for the fact that he had even questioned his loyalty to the village, and whether this was known to his friends, mentors, or the Kazekage or not, Kaito would do everything in his power to rectify it all and show his unyielding loyalty to Sunagakure.

Kaito went to unpack his gear, and after a little while of deliberation, decided that due in part to his actions he did not yield the ability to show his clan's symbol upon his back. He would discard his gray shirt into his closet until he felt he deserved to wear it again, and in the meantime deliberated upon a new outfit for himself.

After about thirty minutes, Kaito settled upon a simple fishnet tanktop, a pair of dark grey pants cuffed above his ankles, some fishnet anklets, black shinobi sandals, and a pair of black gloves with metallic plates upon each of their backs. As he prepared to step into the mirror, he remembered one last finishing touch.

'My headband!' Looking at the nightstand next to his bed, he could see his village headband sitting proudly. He grabbed it in his hand and tied it gracefully around his forehead, making sure that the village's symbol shown directly above his eyes front and center.

"Much better!" He exclaimed before sighing and walking to stand in front of the standing mirror in the corner of the bedroom. 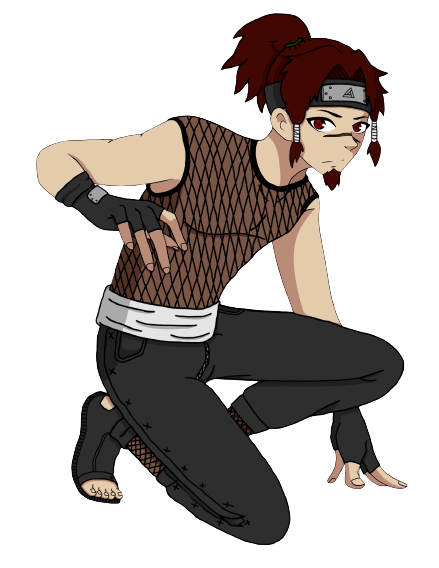 Liking what he saw, Kaito grinned brightly and walked out to the kitchen to grab a light snack before deciding to go to the village's training grounds and to keep himself busy with his training.