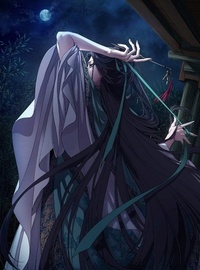 Appearance: Kazuyuki is a very pretty young man, dressing more like the spoiled son of some nobility than the shinobi he is. Often bundling himself in finely made kimono, his clothing choices seem rather impractical until one sees him move. He carries himself with a fair amount of grace, every bit the confident and beautiful individual. His hair is a beautiful soft brown, left long and mostly loose with only a small portion pinned up with a delicate pin. His eyes are a beautiful shade of leaf green, expressive and always lined with subtle but beautiful makeup to make him stand out even more.

Personality: Kazuyuki is someone who looks at life and chooses to roll with the punches. An easygoing and fun-loving individual, Kazuyuki tends to take what life gives him, and is rarely bothered by much. Insults and scolding mean nothing to him, and he often takes it as a challenge to annoy the person even more the next time rather than being truly chastised. He’s plenty mischievous when he feels like it, though any truly malicious pranks are saved only for the worst kind of people.

He’s rather fond of animals, and would like to have a summons of his own one day. As it is, he’ll feed any strays he comes across, and spoils any pets others may have every time he sees them.

If there is one thing that gets to Kazuyuki, it’s his clothes getting irreparably stained or dirty in some way. He spends a lot of his money on functionally sturdy and beautiful clothes, and seeing them damaged is something he truly hates beyond all else. This is one of the rare few things that may drive him to be truly mean outside of true combat.

I’ve been informed I can actually claim stats from that event WC, so I’ll be claiming 80 stat points and putting 60 into vigor and 20 into chakra.