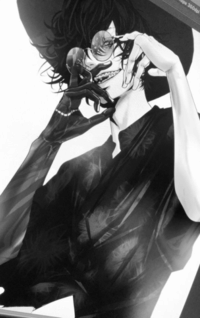 What it does: The moment the genjutsu lands, the afflicted target’s sense of perception is altered in a way that affects their spatial ability. While under the effects of the genjutsu, the spatial ability is altered from one centimetre up to half a metre regarding any new actions and events that the afflicted target witnesses in a direction decided by the user upon casting. For example, if the user throws a kunai, an opponent under the effect of this genjutsu will see and hear the kunai’s trajectory and point of impact occurring a set amount of centimetres to either the right or the left from the point of actual impact. Can afflict up to 1|3|5 targets.
Character Specific: N/A
Wordcount to learn: 500|1000|1500
Action Cost: 10|20|30
Mastery: AP
Bonus Requirements:N/A
Canon, Custom, Bloodline, or Village Exclusive: Site Canon