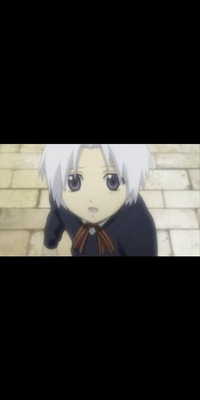 Standing 122.6cm's (4 foot) tall and weighting 23.4kg Lark has white hair that comes down to just above his shoulders, Silver/gray eyes and has Pale skin.
Lark wears a normal shirt and pants combo that is dark blue/gray for the shirt and black for the pants. He looks like your normal kind/innocent child and is always seen with a smile on his face. He has a slight scar on his face that he had gotten when he was training his his mother, She got a little to into the training and accidently clipped him with her nail.

Lark has a Mischievous personality he likes to play around, but he doesn't like to play pranks for the sake of doing them. Only when the prank will be took light heartedly.
He at times can be a shy boy, but he is mostly smiles and will ask questions/talk a lot. He likes to read and will do so whenever he has the spare time to you would never catch him eating bell peppers he would run away before it ever came close to him. He has a sense of duty to his mother but that is to show her memories of what he will become later in life when he meets her again.

Added my Claim from the Mission
Added Taijutsu as Primary Spec