The Shadow Looms Over 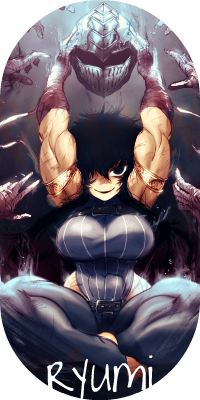 The Shadow Looms Over

The soft blowing wind of the sandy planes of the training grounds was where one Genin stood alone, similarly to how she was found by Enishi Kurosawa before the final bout of the tournament. Ryumi Hiyu, the supposed princess of the Hiyu, would be found pounding her fist through one of the many Tree trunks around the area. The deforestation rises might be linked with her sending a tree crashing to the ground due to a kick once. Yet she was feeling a bit strange, like a ghost had passed through her. Her arms aching and lightly dropping with blood. Parts of the training grounds had slight red dots staining the grass and even separate trunks had slight markings of blood where she had slammed her fist against them.

It was that same level of boredom that washed over her, the wide area would be a good place to spar if she found anyone to spar with. Purple eyes scanning the field for a moment, could she potentially change her appearance with that new jutsu she had learned. The thought of something like that potentially helping her in a fight was interesting to say the least. But Ryumi didn’t really know if she should change her appearance. Not a lot of people knew what her chakra was like, yet hopefully that meant she could do something alone. So perhaps she could change her appearance to match what she at least wanted to look like for a moment.

Her skin slowly began to smooth over any of the scars that she used to have, her muscles becoming slightly more lean and focused mainly into rounding her out a bit more. She still felt the pain of her arms, yet they were hidden due to the advanced transformation. She simply had to keep a hold of the hand seal that was assigned to this advanced form of transformation. With that, Ryumi was able to change her appearance mildly, mainly looking slightly younger.

Yamato was taking a stroll through the training grounds, a very peculiar thing had happened…he was given the bodies of two people he had never met before, or at least that is what he thought…finding out through a series of correspondence through a rather unorthodox cipher he was told these were the “children” of Worr Terumi, a bastard and and adopted child that were kept in a spatial dimension for a time and delivered to the last descendant of the late Amekage. With his study he found a way to use sealing techniques to bring to life, or to reanimate these bodies. As such his “brother” ventured off and began a life of crime similar to Miyamoto’s own. His sister chased after the missing nin, becoming a vagabond…

Now that was through though he found himself at a crossroads…

He was quiet as he walked up on someone striking a tree, but a familiar presence was not too far off and he understood what was going on. “Ya know…if you keep that up you might just become a damn tree right?” Yamato said to the mysterious muscled figure, he was curious about this rather intense training since he had done that at one point and time. “Also have you not seen that it is rather dark out here…you worried about someone attacking you? Have you not heard of the fire bandit that has appeared here in Hoshigakure?” He followed up and waited for a response as Kanzaki stood in one of the taller trees…she overlooked her “brother” while also looking out on the horizon for the bastard she was currently hunting.

Ryumi wasn’t really concerned much for her own safety at the moment, only that she was someone who could at least hold her own inside of a fight as is. The tree was a reminder that she could hold her own in a fight no matter who she went up against. Yet the sudden intrusion of one Yamato Shinrei did catch her a bit off guard. What was it with people and coming to her inside of the training grounds of all things. First it was Atarashi, next it was Enishi, and finally it was now Shinrei Yamato himself. The man that got practically destroyed in the sword fight against Hoshimura Tsunayoshi. Spinning on her heel, the Hiyu had suddenly turned to face the curmudgeonly man, his complaints about her smacking her arms against a tree cast a small smile on her face as she gave a small flex of her arm towards Yamato.

“Ahhh, but this is just for my training! There’s no way I could become a tree just by punching some wood!” She’d introduce herself in a moment, perhaps the sudden warning of a bandit nearby had the Hiyu a bit alarmed… How could a bandit get so close into the village that now they were making a mess everywhere? Something about Yamato’s words didn’t sit right with her. Especially given that this fire bandit was something that she had ever heard of before. This fire bandit seemed to be slightly known, yet the name didn’t really spark any kind of fear. It was someone that could use fire release, or else they’d be known as probably the oil bandit if they used oils or perfumes to ignite their flames. Her blackened hair wasn’t as matted or disheveled as before when meeting new people due to her own new transformation. Her clothing had also gotten a bit more loose, allowing her to be more free when training. She liked the new look that she had given herself, it was something that was unique and also familiar to her. As it represented what she looked like before the attacks on her.

“Well if there is a fire bandit… Then I’m sure I could take em out at the moment, yet this fire bandit doesn’t sound like too much of a challenge, the name could also use some kind of work here or there… Blazing bandit sounds like a far more threatening name… Wouldn’t you agree?”

Ryumi was practically taking pot shots at the epitaph that this bandit had made for himself. Such a stupid name was the Fire Bandit… Almost as bad as simply being called a Fire Giant….

Yamato was not intrigued by the rather dismal display of power…shinobi were mostly all the same anyway, everyone had to be special. Hitting a tree through with one’s hands or feet was just…well he remembered doing it when he was…six or seven. Regardless, the Jounin was just there to see if there was anyone worth having around to train his “sister”, a living clone that he placed inside of a stored body of the “children” of Worr Terumi. With the very bland joke having clearly gone over the head of the shinobi before him, he waved it off as if to dismiss the entirety of the first part of the conversation. Seeing that she was at least thinking about the name of the bandit told him that this was probably fruitless, but it was worthless to just stand around and talk. Still though she went into a small conversation starter about a possible better name for whomever gave the bandit his current moniker. “Honestly I do not make up the names, I am just told to kill them if they cause issues around our village. Eventually, kids do not have to continue punching trees to get stronger.” He said with a chuckle before stretching, the wind blew through the area and he noticed his dear sister in a tree where they showed a deep intent to fight the “tree punching” girl.

“Well you look like you might strike down that wooden foe in due time, but I have a better proposition that can help both me and you out. I need my sister to get stronger through battle experience more than physical training. I have no doubt you will be able to hold up while facing someone that shares like minded sentiments. I will keep a lookout for the bandit, and you two can trade “pointers” until I grow bored, how does that sound? Once you are done you can go back to kicking the tree until it admits defeat.” He finally finished as Kanzaki jumped to Yamato’s side and looked at Ryumi and gave a polite, almost rehearsed bow.

Ryumi did understand the joke, even if it was a completely terrible one as is. It’s like those people that say “You’re gonna become a cup of ramen if you eat too much of it,” Yamato didn’t seem to be very impressed by her display of strength. Her eyes rolled at his sudden explanation and response to her starter on calling the bandit by a different name. Instead immediately going into the killing part about it. However the sudden shot at her punching tree’s made her give a small laugh towards the Jonin before her.

“Sheesh alright. I would have gone for much bigger fish if Enishi wasn’t stuck inside of a Wheelchair at the moment, although I must say, coming at me for simply punching a tree as a part of some training regiment is a bit of a low blow. As after all, a warm up is still a warm up.”

The sudden arrival of his supposed sister made Ryumi also return the bow, as hers looked even more rehearsed. Hands suddenly clasped above one another. A small woeful smile appeared on her lips as she bowed forwards like that of the nuns up where all of those religious folks were. It was the only bow that she knew that showed any kind of respect towards someone. Ryumi was a bit excited to see what this Kanzaki could do, especially if she was someone that could use Taijutsu as well inside of a fight. Ryumi returns to her normal pose still inside of the advanced transformation disguise. Her true appearance as a scarred individual was still unknown to the both of them. Honestly she looked rather green as a shinobi if anything.

“Well I’m hopeful in being able to help with your sisters overall pointers in combat, although I should probably move onto much bigger fish if that’s the case, perhaps those pure metal dummies would do well if this fight proves to be a bore. But Hopefully that is not the case right Kanzaki?”

She gave a small smug smile towards the other girl, wondering how’d she react to a it of a shot towards her as well. Ryumi’s fists tightening as her hair slightly waved in the wind, this would surely be a fun match up. At least that was what Ryumi was hopeful for. Her Devil Countries Bo-staff attached to her back as she prepared herself for combat.