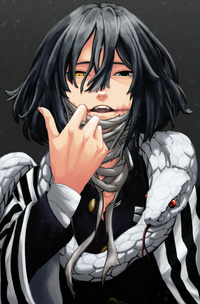 Name: Serpent Breathing
Element: -
Rank: C | B
Specialty: Weaponry
Particular Jutsu Type: N/A
Backstory: Serpent Breathing is a technique used by the Viperis Clan. This kind of technique was created by the first member of the clan, passed down through generation by plenty of other members this technique was rear to encounter even amount said members; only does that posses either there clans pureblood Lineage or possess the "Eyes Of Medusa"


Appearance: Orochi close his eyes then focused on his breathing this allows the user to activate the technique.


What it does: Serpent Breathing is a Breathing Style that mimics serpents/snakes, specifically their slithering motions, and replicates it with the user's movements, techniques and abilities. Most, if not all, known techniques and forms focuses on twisting and bending the sword like how a serpent slithers, the attacks are not direct and constantly meander which can ultimately strike anywhere. Users of Serpent Breathing also visualize themselves seemingly manifesting white serpents that accompany them when unleashing its techniques.

Change the Jutsu type to Amplifier with the stats to match because that is how this reads as it does not offer anything to be considered a technique. Otherwise you need to redo this as more of a skill.