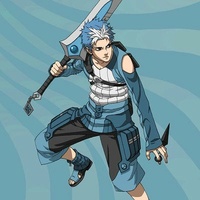 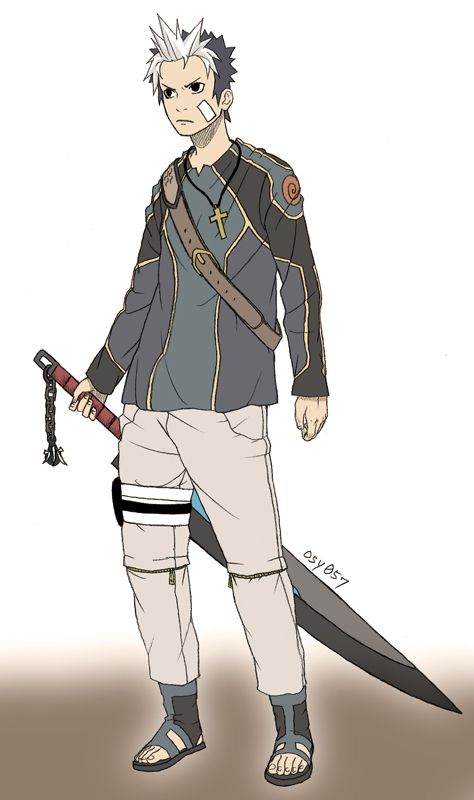 
Appearance: Soma is a average young man with medium blue hair and a birthmark that makes the front of his hair white; Soma has black eyes with a scar on his left cheek. Soma dresses quiet casually ranging from long sleeve shirts to short sleeves shirts and a sweater on top from time to time, he wears a necklace as well given to him by his mother. For pants he wears your regular shinobi pants that reach to the ankles leaving space for movement and for shoes he wears shinobie sandals.


Personality: Soma is a knowledgeable fighter who cares deeply for others, he is known to be a troublemaker. Soma has also known to be a mindful person of his higher ups, and shows respect to his superiors. Soma can be a bit cocky at times toward his underlings. Soma has strong ideology about protecting the weak and the helpless but sometimes he finds them to get in the way, while does care for everyone he has hatred towards the weakness of others. Soma can be conflicting at times and contradictory towards his own statement and philosophy, as long as it helps his case. Soma is also a sarcastic person making fun of pretty much any situation that he finds funny regardless if its serious or not, he will burst in laughter at all times.


Your Story: Soma learn how to use ninjutsu by watching his parents train while he was home as well as practicing with them; other time was from the academy as his teacher taught them the basic of chakra manipulation and chakra usage. Soma wasn't the brightest person in class but he always tried to pay attention when it was necessary other times he spend goofing off and bother his friends and the class. Soma became a genin after his academy test that he almost failed, he was quiet content with that as well as his parents. They knew he would only give his best if he put his mind into the effort; during the begging of his genin days Soma learned how to use weapons as he was fascinated by them. After a while he became well verse on them even trying to reach the level of the seven swordsmen and become one.