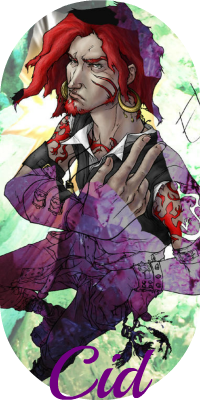 Cid would meander his down the streets, taking in as much as he actually could in his slightly still inebriated state. He'd watch as a handful of shinobi folk started walking in a particular direction, to which he just shrugged and followed. It wasn't long before he found himself in front of a rather large training facility of some sorts. "Sspared no exssspense, I seeeee." He'd state loudly with a bit of a slur to his words. He'd consider weaving the seals to conjure some more rum from his stash, but he figured that probably wouldn't help him find his companions right now.

He would mosey into the training facility, the red haired pirate probably sticking out a bit as he lightly sways while searching for his companions. How did Grey get so far into this place? Or was he still stuck at the gates!?! A wave of panic would set in, hoping that the man wasn't found out at the gate and taken prisoner or such. He really didn't want to have to stage a prison break. 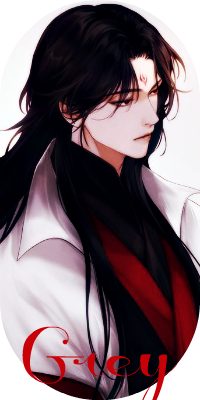 Survived 2021
You've completed the Christmas Event of 2021 and qualified for the last reward, by partisan you are awarded this fancy badge!
Ryo : 93650

He wasn't sure what to expect now that he made it safely past the gates and into the village he once used to call home. There was hardly an ounce of nostalgia, for that both Grey as Konohagakure had changed too much over the years. "It seems each of us has finally found the freedom we were looking for". Resting one hand on the blade he carried on his right hip, the Hyuuga made his way further into the village hoping the others would soon follow suit. Assuming the rest of them did arrive, they would be able to meet up and discuss how to proceed next.

The streets were filled with lots of people, mainly shinobi, all heading in the same direction. "Might as well check it out while I wait" Grey thought to himself. Following behind, the Hyuuga swordsman soon noticed they had arrived at what seemed to be a training facility of some sorts, allowing everyone to train to their heart's content. Among the group of people, Grey suddenly noticed a head sticking it, a red haired slightly wobbling from left to right as if he appeared to be in some kind of state. "I guess even your drunk ass was able to find its way in" he addressed Cid after joining his friend.

The drunken sailor would be in awe at the grandeur of this place when a familiar voice would snap him from his thoughts. "Hell, yeah I did. Just walked right on through." He'd offer with a stretch and a scratch of his chin, a goofy smirk on his face as he realized that Grey was behind him. Now that could have meant any number of things, the Hyuuga possibly already having been in the village and enjoyed a meal before doubling back to check out the sights. But Cid was a little too intoxicated to not offer up some verbal pokes, "So, what took you so long? Don't tell me you are getting rusty?" The smirk on his face made it clear the playfulness behind the words. He'd see if Grey had a reply before speaking again.

"You see this shit?!" Cid would exclaim, pointing at the huge training facility that the village had and used to train its ninja. "The village must be doing reeeally well to be able to afford a luxury like this." He'd look around, checking to see if there were any people around. There were, but they seemed focused on their own conversations on their way into the facilities. "A lot of money changing hands around here it seems..." He'd offer a look to Grey, knowing that the man had been familiar enough with him and his goofy ass ways to catch his meaning. This place likely had prime targets. Of course... there were also deep into "enemy lines" and so any less than legal activities might not go so well if they are caught. "Hmm... maybe that's a bad idea." He'd inhale through his nose, clearing it of any blockage before turning on his heels and making his way towards the doors.

"I dunno about you, but I gotta check this place out. See if its as nice on the inside as it looks from out here." And with this said he'd wait at the door, making sure to hold it for his companion as he offered a gesture 'after you' with a little bow.

OoC: Gonna let you describe the advanced training facility since I figure you'd be the expert

Survived 2021
You've completed the Christmas Event of 2021 and qualified for the last reward, by partisan you are awarded this fancy badge!
Ryo : 93650

A small sigh and a smile escaped Grey's mouth upon hearing his friend's remark. "The line was longer than I thought, that and the fact Auron decided to reveal his identity as a former Konohagakure shinobi to one of the guards". Whether it was wise or not would be up for debate, but the Hyuuga wasn't going to wait any longer to find out. He too once used to call this place his home, however, that didn't mean he would blatantly announce it and risk getting imprisoned. They had a reason for being there and getting caught wasn't one of them.

Similar to his companion, the swordsman started to look around, noticing a handful of people had gathered around. "Yes, it seems the village has finally moved forward" the Hyuuga voiced, witnessing a major difference with the Konohagakure he remembered. As the two of them stood there, Cid couldn't help but mention the possibility of getting their hands on some coin, something that made sense going by the nature of the red haired pirate. "Perhaps we can find an interesting target leaving the village later". Even though Grey didn't want to miss out on any opportunity, he also knew how risky it was doing it inside the walls.

Knowing that simply standing there wouldn't do them any good both men decided to enter the facility. As they did and made it past the door, a beautiful scenery would appear. A lot of grass, trees, even a small lake in the middle of it all, surrounded by countless training dummies and other equipment people could use to hone their skills. "Looks like they did spare no expense". Grey would make his way further into the grounds, noticing that besides the two of them not many had gathered yet. Perhaps the ideal moment to try something out.

The Hyuuga walked up to one of the training dummies, placing his hand on the hilt of his blade before unsheathing the sword in a rapid and swift movement, effectively cutting down the tool in front of him. "Not bad" he voiced before looking in Cid's direction. "Why don't you try sobering up a bit?" the swordsman would tease his friend.

Grey would explain just why it took him so long, to which the pirates eyes would widen. They were all criminal ninja, wanted in some capacity for various crime. One notable crime for any village shinobi is to leave said village of origin. Something about leaking village secrets or something. And Auron just stated plainly that he was a former Konoha shinobi? Cid knew that man had a pair of big brass ones, but sheesh! Well, hopefully that would pan out okay for him. If not, he might have to resort to that jail break idea once more, and that wasn't something he particularly wanted to have to do. The pirate, luckily enough, should be able to keep a fairly low profile here. Cid also was a former Konoha ninja in training a long long time ago, but he dropped out of the academy before graduating so he never officially became a shinobi of Konoha. Nope, he learned his talents on the streets. Then honed those skills protecting ships from raiding parties. Probably also where he picked up mild alcoholism from being paid in booze from time to time...

The village was a great deal different that he recalled, but he hadn't been here in a great many years. There was a different feeling to the place, honestly. It felt like.. freedom. Not a single stupid Kiri headband anywhere to be found on any of the people walking about. Even if he didn't have a deep connection with this place, his deep rooted desires of freedom made him glad that this place didn't seem like it was under another villages thumb. Perhaps the village was made of stronger stuff than he gave it credit for.

The pair would enter into the facility, the grounds taken care of quite well, Various training implements along with differing terrains allowed for various types of training routines. The pirate would find himself looking around, just checking the place out when he would hear the distinctive sound of his comrade drawing steel. The rogue would turn his head, glancing back to see the training dummy sliced in twain, the strike point looking like it was a clean cut. Meant the blade was quite sharp to glide through a solid target like a hot knife through butter.

"Not bad at all," He would offer. When asked about sobering up he'd grin. "I'm sober enough to hit a target right on the money, but drunk enough to stay loose enough to roll with any punches that come my way. Plus, I might not even feel 'em!" He'd reply, clumsily drawing a shuriken and whipping it at a nearby target. It struck true, though it was far from a bullseye. He could feel the incoming shots, his precognition right now far superior to any Sharingan ability. "Well... I'm no weaponry expert, but you get my meaning."

Considering the sheer growth that the bandit has witnessed in his brother in arms, he figured it best that he too try and improve a bit since they had a bit of time. "So, Grey... you know anything about elements? My family expected me to have an affinity to lightning, but as you know I ended up being a bit of a fire specialist. Think that lightning might have something to do with my clan shit."

This would no doubt come as a surprise to Grey, the red headed bandit never really having mentioned much regarding his clan heritage before. He figured he might as well try to develop the skills associated with his bloodline, else it was a gift he was just outright squandering.