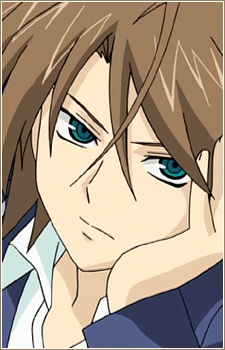 Appearance: Akeno is a lithe, sharp young man with angular features and limbs.  Despite this, he tends to carry himself with a rather distant air.  His attire is generally varied, although it will often consist of long-sleeved shirts of dark coloration (black, grey and red tend to be the most common) and similar slacks, although he does often bind the shirt at the wrists and pants at the ankles to keep them from interfering in any way with his movements.  His brown hair is often untamed, or rather it appears so although he does some fair work to ensure that there is some genuine control to the chaos.
Akeno's expression is often dispassionate, with little showing on his features as expected of a shinobi, even as young as he is.  But as with most his age, puberty has already started, leaving him growing taller and filling out, although he is admittedly still in a rather awkward stage of in-between.


Personality:A singular word for Akeno is driven.  Neither of his parents had much talent for this, but when he was younger, it was clear that he had at least enough talent to push forward into actually being something of a shinobi.  Since that dream was made real to him, the young man had spared very little when it came to training himself to try and get better.  It's not as if he isn't well-liked by his peers, but he tends to hold a rather aloof nature about himself, never really engaging and cutting up like some of the others do.
Even those that he finds himself closer to, Akeno doesn't really open up much.  He has yet to really form the strong bonds that often come with a team, but all the same, he views others as people that need to be protected.  Even among the other students in class, and even thsoe who are superior to him in one area or another, he simply finds himself with a strong need to protect them, and as such, he finds himself unable to get too close to them for that same reason.  He's a veritable sponge when it comes to new information, classwork and so forth.  He constantly wishes to take in anything new that he hasn't yet seen before, and can often be found reading as well.
In the sparring matches he had, he has a tendency to get a little too into things, and is often required to back down from actually dealing serious harm to his classmates.  But that same going overboard has also led to his training to exhaustion, coming home with bruised everything with just enough strength to wash before passing out.

Gains from This Thread-