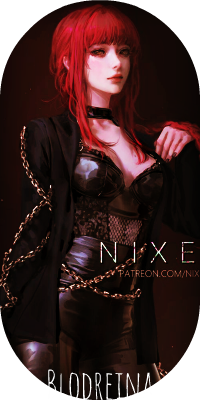 The great white moon was full, towering over the rice fields. Casting it's eerie, yet beautiful light amongst the dark night. At a distance stood a lone figure. Their back rested against the side of a tree. Their posture was almost lazy.

Further out from the fields, there so happened to be a little bit of woods scattered here and there. The trees didn't offer much shade during the hot days due to their solemn occurrence, but they still provided for a nice place to rest against.

The lone figure released the limp corpse of a hare from their hand, letting it fall on the dirt at their feet, before they attempted to kick some of the dirt over the body. With the other hand, they wiped at their mouth. Being careful to clean away any crimson mess that they've made upon themselves.

The rabbit tonight did very little to ease her hunger, but at least she wouldn't starve, or go bizarre and lash out. But now it was time to move on from her little spot. No doubt an animal will come by and feast amongst the dead hare corpse later on.

As Kana was certain that she was good to go, she pushed herself from her spot against the tree. Heading into the direction that would lead her back into the residence of Tanbogakure.

But before the woman was able to make even five steps from the tree, a low growl would rumble from behind her. The growl was low but so loud that it sounded like it was coming from a massive beast. Kana whipped around, half expecting to see a bear, but then wondering if Tanbogakure even had any bears. Her silent question was soon easily answered as her ruby eyes took in the sight of another pair of eyes staring right back at her.

It definitely wasn't a bear, for from the eyes was a snout that was too long to be a grizzly.

But what really troubled her was the size of this animal. Maybe it wasn't no ordinary animal. Perhaps it was a monster! It might as well have been from its size. Even though Kana was quite short, this beast still was about twice her size!

For once in a very long time, Kana was terrified. She quickly tried to evaluate her situation, wondering how she would get out without getting hurt, or even killed. Fighting such a massive beast might as well be suicide. She continued to watch the monster, not daring to move as of yet. The beast took two long seconds to stare at her, before it lowered it's snout to the ground. Sniffing at the dead rabbit before taking it into it's jaws. The rabbit corpse was awkwardly small as it hung from the side of the beast's massive mowl.

The beast raised it's head and the small corpse of the rabbit disappeared within. Sliding down it's throat with a sickening swallow.

Would she be able to outrun such a large beast? Or perhaps she would be better to find a tree to climb. No doubt the rabbit did nothing to satisfy and the red haired lass was probably next on the menu.

"Odd. . to see a human with such predatory instinct. Feasting on the blood of a hare." A voice suddenly forced it's way into Kana's thoughts. The beast before her grumbled as the words continued to spill into her own head. "Are you even truly human? Or do you have some sort of wicked curse."

Kana pressed her palm against the side of her forehead. Whatever this voice was, it was unlike anything else she had ever experienced.

"You don't smell ordinary. And there is something missing. Something that is so. . . distinct for the living."The beast tilted its massive head to the side, as a quiver ran through the pointed ear. As if the beast was listening for something real closely. "You can't hide much from me. . little one." And then all of the sudden, the voice was followed by high-pitched laughter as the monster's teeth bared at her like a wicked smile. The noise of the laughter belonged to that of a hyena.

The eerie laughter echoed through the darkness and suddenly Kana was overwhelmed with the instinct to run, dart, anything to quickly out distance between her and this looming beast.

So run she did.

Kana heels turned as she began to run away from the massive hyena. She didn't know exactly where it was that she planned to dash to, it was hard for her to think properly with the hyena laughing after her. All she knew was that the wind tugged at her red locks and swept the hair free from her face as she took off in a dead sprint.

But of course the game of cat and mouse ended quickly after it had began. Kana's vision was suddenly blinded by flying dirt and dark crimson fur as the hyena landed just to the right of her. The beast has pounced and landed so close to the kunoichi that it knocked her off balance. Causing the lass to topple over onto the ground like a clumsy rag doll.

Rolling over acrossed the cold dirt as another chorus of laughter lit up the night. "Where's your heart at little one? I can't seem to hear the beating of your fear." The voice echoed once more through her thoughts as Kana fought her way up from the ground. Quickly turning her body to face off the beast that easily caught up with her. It was far too massive to outrun.

"There's no point in chasing me. My blood is too foul for you. I'm not worth eating; beast." Kana's voice spoke outloud as her eyes once more looked upon the devil dog.

"Many would make up excuses to avoid getting eaten. . . but something tells me that you are telling the truth; little one with a dead heart." The hyena lowered it's massive head down to where it was level with the kunoichi. It's large eyes gazed into her dull crimson ones. "But I'm far too curious to just simply walk away. I want to know more about you and your curse."

Kana didn't know what to expect. The ground was cold from where she laid, with a beast from nightmares looming over her. For a moment, the kunoichi was able to take in it's full appearance. The moonlight up above washed over the scarlet fur that rippled along the hyena's body, with stripes that ran from its spine and down to the ribcage. Scarlet like the hair on top of her head.

She was still waiting for the Hyena's scarlet fur to be painted with the crimson of her poisonous blood. Despite what the beast said within her thoughts, Kana didn't trust the words.

Time felt as if it was slowing down, as the Hyena bent it's snout lower towards the small Kyuketsuki. Despite the youth of her appearance, the kunoichi has lived many years. Though she was still young to many other Kyuketsuki. Perhaps it will end at this very moment. It should be quick though. Hopefully just a single gulp, or a bite that instantly crushed her skull.

The hyena opened its large mouth, and the short. razor sharp teeth glistened back at her. Instinctively; Kana's small nose twitched from the stench that came from it's breath. Must be frol all the dead carcasses that this beast has feasted upon. It wasn't very pleasant, but Kana couldn't find the voice to complain about it.

So she closed her eyes and waited for fate to make it's one final call, its final decision on her life. The teeth that would soon be opening her skin and spilling her out.

But instead there was a suddenly glob of wetness as a rough surface ran acrossed her entire arm.

With a shocked gasp that vocally sounded from her lips, Kana opened her eyes. They were wide as she took in the sight of the Hyena licking the tattoos along her inked arm. Following that; a seal would spiral itself amongst her ink.