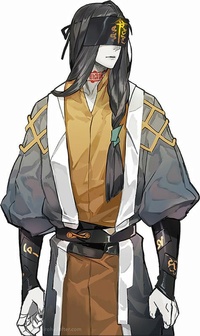 Appearance:
Chiaki is tall and muscular, but built on a slender frame. She wears her long, black hair in loose braids that tumble over her shoulders. Over her eyes is a black blindfold. Her neck is ringed with a red tattoo displaying characters for "Blood", "Breath", and "Chakra". For clothes, Chiaki  wears long, grey and yellow robes, with tight black vambraces around her forearms. The final - and perhaps least noticeable - aspect of Chiaki's appearance is that regardless of the state of the rest of her body or attire, her hands are almost always exceptionally clean, with closely-trimmed, dirt-free fingernails. There is a rather recent stab wound on her left hand, wrapped in bandages and only just beginning to scab over and scar.

Personality:
Even with her size, Chiaki is a wallflower. Quiet, reserved, and a little shy, she tries to avoid much notice. In spite of this, she is rather friendly and caring, her soft-spoken words filled with praise and empathy at every utterance. She is naturally trusting of others, difficult to anger, but remarkably vindictive when finally pushed into holding a grudge. The latter is a fact that causes Chiaki no small amount of shame, and she does her best to reign such emotions in.

Story:
Chiaki had the humble start as a butcher in Rice Country. She worked the fields like everyone else in her village, and then carved up the kills that the hunters brought in.

When Zukumiki and his warband drew closer to the village, the village sent out men and women to fight alongside other towns and villages in a desperate effort to push the warlord back. The efforts failed again and again, with each battle sending more wounded back to Chiaki's village. Some of the wounded required bandages and medicines. Others required surgery, but without a doctor, operations could not safely take place. It was eventually decided that attempting a surgeries was necessary, even if the risk of failure was high. And it was decided that Chiaki would act as the impromptu surgeon, for she had steady hands and knowledge of anatomy from her profession.

The first operation was a failure, and the patient died. Determined to learn and do better, Chiaki cut open the body again and found what went wrong... she had sewn shut the wound, but not the internal damage. The bleeding had continued, only it pooled inside the body.

The next operation was a failure as well. And the third. And the fourth. Again and again, Chiaki failed to save a life, and again and again she performed an amateur autopsy to learn from her mistakes.

By the time she actually managed to perform a successful operation, Chiaki had gotten used to being called "the Butcher." It didn't matter that the role had been thrust upon her, Chiaki was an outlet for some of the town's pent up fear and frustration. She became a figure that made former friends nervous and uncomfortable. When Zukumiki finally drew so close that the villagers decided to abandon their homes, they did not allow Chiaki to come with them.

And so she wanders, having heard of the Village Hidden in the Rice Paddies, hoping that perhaps Tanbogakure will serve as a home where she can be of use... and that they will help her deal with Zukumiki once and for all.


Along her journeys, Chiaki encountered a kidnapper and his victim, a young boy. Following a short but brutal fight, she suffered a severe wound to the hand, but killed the kidnapper and returned the boy home.