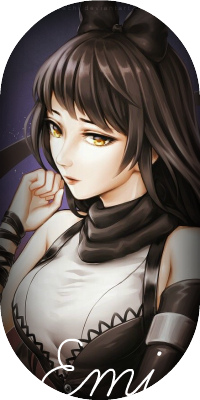 Challenges: -
Task: Hundreds of people enter Hoshigakure daily, some to accumulate knowledge, some to worship and meditate and some to simply see the sights. Your job is to stand in front of the palace gates and direct lost people where they need to go. Should they wish to pray at a certain temple, show them the way. If they are there for sightseeing, recommend the best shops, restaurants or tourist attractions.

It was Emilia’s first mission in quite some time. She had taken a bit of a hiatus to do some searching of herself and find out what she really wants from this world. She had decided to start off easy and do something that would just help her get back into the groove of things. The scroll she had been given had “Information Booth” written on top of it. This was a fairly common mission for genin as they were supposed to go to the palace gates and just sort of help direct traffic a bit. If anyone seemed lost or needed help with directions, she would just be there to guide them along their way. The scroll didn’t include a time to be there, but she figured she would get there pretty early and spend the day, maybe meet a few of the guards as well.

The young kunoichi made sure to double check her equipment to see if she had everything. Emi had already gotten into her everyday attire, which included black shorts, some black arm guards/tape, and a silver top that really showed off her breasts. There were some other things too but these were the most important to note right now. As the genin confirmed she had all she needed, she walked to the front door, opened it up and stepped outside, making sure she shut it and then locked it behind her. She was sure there wouldn’t be a break in, though it’s always better to be safe than sorry. Her skinny but muscular legs helped her dart off towards the palace gates and moved quickly. Emilia was never really one to waste time on anything she did, it was a trait about her that some liked and some probably didn’t like.


”Hopefully we can make this a fun outing/mission today. I’d rather not make a miniscule task such as this boring or tough. Not sure how we can accomplish this though.” The thoughts entered and ran wild through her mind as she searched for ways to enjoy her time during the mission. A small frown would appear as an expression as she really just couldn’t think of anything. Not that Emilia was ever really creative in this sort of way, so it’s not a large surprised. Moments later, her eyes would widen slightly as she realized she had finally made it to the palace gates. The place where she would begin her first mission and months, as well as the place she would spend a good portion of the day to help the guards direct some human traffic. Though please don’t confuse this with human trafficking, that’s disgusting.
As the young and serene genin approached the gates there were several guards already there who had started their shifts. Each of them looked at Emilia as she took her place to help them proceed with their duties. ”Hey there boys…” These words escaped the lips of Emilia as she turned and looked at the guards, letting her beauty suck them into her gaze. As her eyes shifted slightly, she noticed one guard who didn’t seem to be enthralled or impressed by her shenanigans. She couldn’t see why as the mask they were wearing covered up the face.  ”Interesting… I was sure this would get all of their….”
As the thoughts pushed through Emilia’s mind, a loud yell had erupted from the unphased guard who had now removed the mask from their face. ”Do I look like a boy/guy to you? Use your damn eyes you brat!” The young female guard had huffed and puffed while yelling this out to Emilia… who began to laugh uncontrollably. She had realized the reason this guard wasn’t impressed or seduced by her was because she was female and she didn’t want to see anymore of it. When Emi could finally get herself to stop laughing, she let the guard know she was sorry and didn’t mean anything by it. After this, everything seemed to flow a little smoother and seemed to brighten up the group in a way.
”I think we should come up with a challenge.. see who can help the most people with directions by the time I am through here today… what do y’all think of that?”
The other guards looked at each other and nodded in agreement as they would play the game that Emilia had proposed. Unbeknownst to her though, they had other plans with this so-called game, and she was just about to find out what they thought was funny. As the first pedestrian had approached the group, you could see them all move a little bit, but Emilia got their first to offer her services. She was looking for a temple which Emilia kindly pointed her in the right direction to.  As the lady walked off, Emilia turned and gave a little wink to the group… as if she had just beaten them in something. The guards played it off well enough and pretended to be a little sad.
As the next person came looking to be guided somewhere, Emilia was once again the “winner” of this so-called contest. She was able to get there first and help them out before the others. As time passed by, she noticed how she was the only one that was really helping these pedestrians. It made her wonder why she was the only one helping and then she realized… they were getting her back for her earlier little prank. Emilia turned her head as the group had realized that she figured out what was going on and they busted out laughing. She could help but give off a smile and return to her post with her head hanging a little low. The had sat back and essentially done zero work all day while Emilia raced out to help any and everyone she could.
”I think my shift is up you mean people… Imma just head on home and I’m sure I will see y’all again.”
Emi just waved goodbye as she had somehow turned today form a miniscule mission to a day of laughter. It made her happy and feel like she had accomplished something, or at least happy that she had taken on this mission. Her drive and motivation were returning to her with each passing second. Before long she would be a complete genin… hopefully ready to take on a chuunin exam or grow in power at the very least. Emilia was hungry to grow right now… and so she was going to find a way to do it as quickly as possible. All thinks to this measly little mission that she took on.

Re: Pranks in Missions