Challenges:
Task: A photographer needs an assistant for the morning doing basically menial labor. You’ll help him with lighting, placement, and whatever else he may think of during your 4 hour shift. The subject matter he’s shooting is completely up to you.

Return to the Mission Directory

“Are you sure this is the latest style for these type of things?”  Asahi shouted from the changing area.

“Yes yes sir, now please we only have four hours so we really must be getting on.”  The dulcet tones of the photographer yelled back.  His irritation at the hold up not even attempting to be hidden.  With an inward sigh, Asahi pushed open the door trying to navigate his way towards the designated area.  He’d been told that all the government officials would require photos so that they could be hung in the offices.  The rest of them had done their sentence earlier in the week, Asahi however had been too busy…..drinking and fishing…..to make the regularly scheduled appointment.  Which was likely one piece of the photographers annoyance, still Asahi though, it wasn’t like he wasn’t getting paid.  Nothing much to complain about really.  His robes where king and flowing, not even relatively close to practical.  They were the colors of oranges and browns that the government officially recognized as the uniform colors for the militia and other government appointmented items.  A ghastly combination Asahi though as he managed his way through to his seat.

What came next was a grueling 35 minutes of positioning, lightning, practice shots, a lesson on posing, and an infinite number of other things That he didn’t care for.  His hair done up in such a tight top know he felt his brain may be pulled out his head at any moment had an ornamental metal piece stuck into it.  His facial features where also done up in makeup to make the photo come out clear, or so the man sad.  A couple minutes later a photo was done, and manufactured for him to give his final approval.  He had least had a modicum of say he supposed.

“Absolutely not!”  He shouted, “look at me, I look like one of those dolls.  Which sometimes I’d be ok with, but not for something like this.”  He’d cross his arms continuing to argue with the photographer.  Eventually the man would give up, and leave.  Now alone with the camera equipment, he had a splendid idea.  Grabbing up all the materials, he left and headed for the stables outside of town.  Once there he set it all up, and offered the ranch hand some ryo to assist him.  An easy deal was struck and a few moments later they were ready.

For his part, Asahi choose to receive his official portrait on horseback.  Princess Ivybluemoon ethereal, the color of the brightest moonlight, green eyes on full display.  Mane combed out, not a not in sight.  For Asahi his sword strapped to his side, one hand resting on it as he sat on his magnificent mare.  His robes he’d transitioned out to a pair black with white accents.  The komekage hat resting in his head, blonde hair tied back into a knot behind his head.  One hand resting on the hilt, the other holding the rains, he turned Ivy Bluemoon at just the right time for the photo, the rice fields of Tanbogakure playing backdrop.  Now that….was a photo.

+520 wc to Swamp of the underworld for princess Ivy 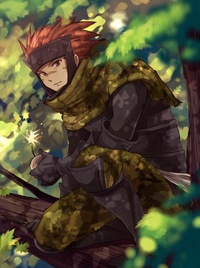