The High Table of Dragons

The High Table of Dragons

Appearance: A rather small dragon standing on it's four legs at 1 meter tall with a wingspan of 2 meters in length. It's scales are a shiny crimson yet are soft to the touch and tender like the skin of an infant. 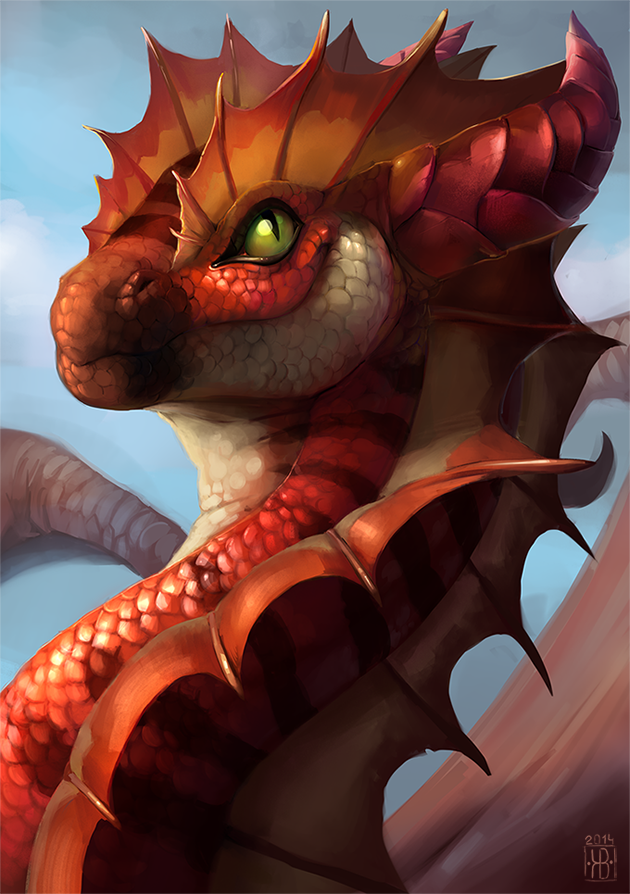 Personality: Dash likes things to be done quick but that's to be expected of a dragon still within it's dragon teens. (Even though he's about a century old) Thus he's always talking in a rapid fashion as his impatience gets the better of him causing him to be on the move and be fast with his movement.
Backstory: The half brother of Baldur that was the happy accident on the mother's side. Has always looked up to Baldur yet has a tendency to use his speed to his advantage in contests with him. When it comes to summoners Dash is very trusting and loyal though his impatience won't allow for much conversation between him and his summoners.

Appearance: A red dragon that is 3 meters in length and height with a wingspan of 6 meters. Carries herself with strong and well developed muscles and spikes that give her a strength and element of danger that sets her apart from her fellow dragons. 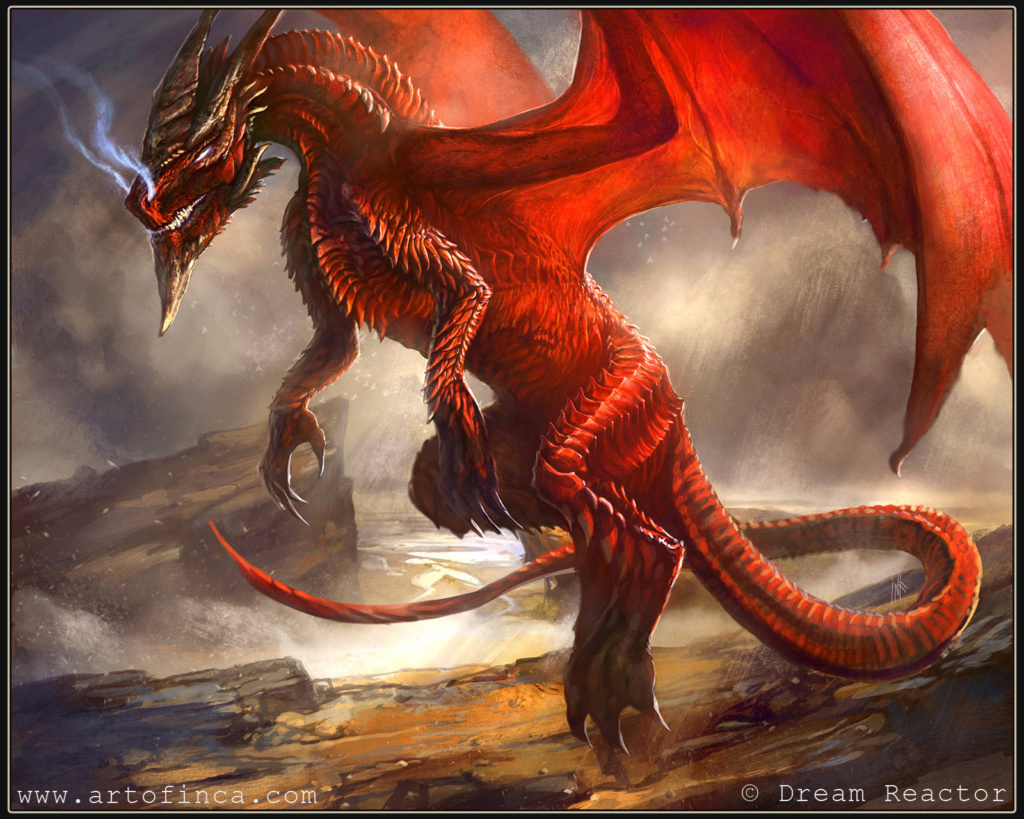 Personality: A very dominant dragon that enjoys using her strength to her advantage. Will often challenge other dragons to either contests of speed or strength in order to test her capabilities and improve upon them as well. When it comes to her brother Sepher, however, she is much more caring and overprotective.
Backstory: A dragon with a penchant for sport and competition that grew up with dragons that were bigger and stronger than her which pushed her to become better. Whenever in the presence of other dragons she always must get an edge of some sort against them and prove that she has the better qualities of a mid-grade dragon. When it comes to her brother Sepher, however, she takes on a much more protective behavior and uses her abilities for protection rather than using them to show off.

Appearance: Unlike his sister, Ferndelle, Sepher is more laid back and prefers meditation over training and hard work. Also he likes his dragon form even though he isn't all that much bigger than his sister at 3.5 meters with a wingspan of 6 meters in length. Has shiny red scales that glow in dark areas showing his wisdom. 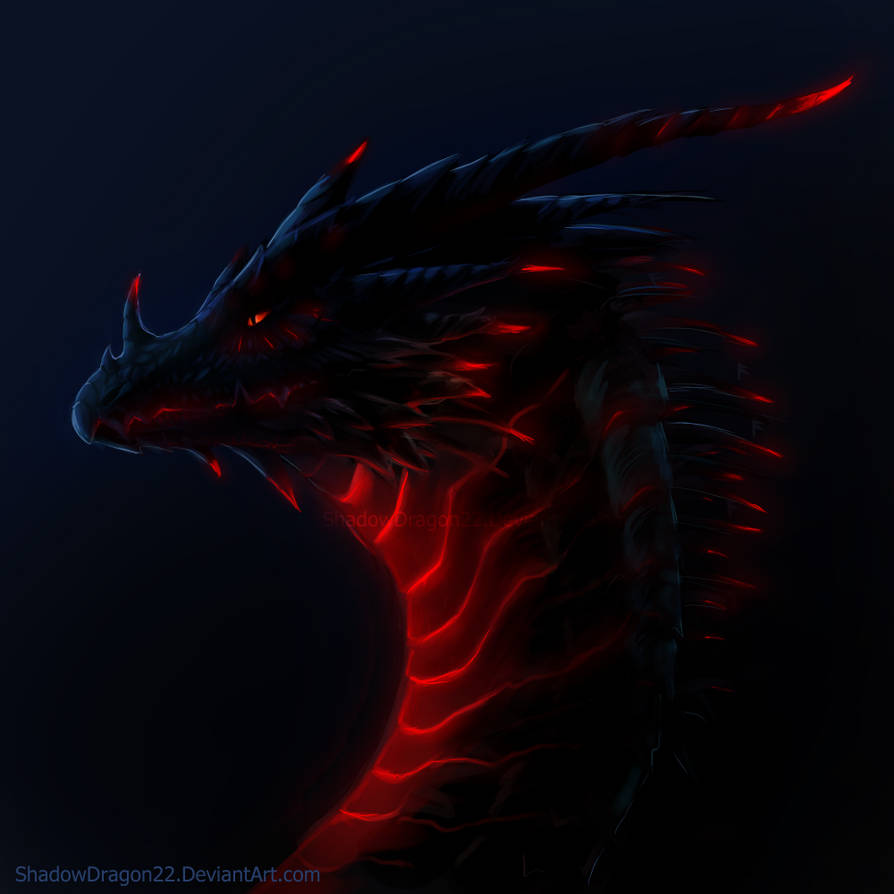 Personality: Over his years of meditation Sepher has developed a calm that many dragons respect as he doesn't let many things, if anything, affect him negatively. He does, however, become very engaged when his sister goes into a fight and he's present wherever the fight takes place.
Backstory: Over the centuries Sepher has developed his training in growing mentally rather than physically. He is the polar opposite of his sister in every way yet that is viewed as a good thing due to the two being able to work so well together their weaknesses aren't easily recognized. In terms of his bond with his summoner he is very loyal and will fight as hard as needed to protect them.

Appearance: A large dragon that is one of the bodyguard dragons for the leaders of the dragon race. Stands at 15 meters in length and height while bearing a 20 meter wingspan. Is tough with crimson scales that look as though they're burning when caught in the sunlight and sharp teeth that glint when ready to bite. 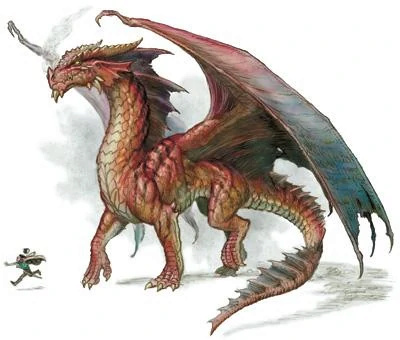 Personality: Has protective instincts that have been tempered through his years of guarding the leaders of the dragon race. Doesn't often speak unless spoken to as he believes a dragon's actions mean more than words. When he speaks, though, he speaks with power and respect as he is seen as one of the pinnacle dragons.
Backstory: Eldwyn grew up bearing a sense for power as he wanted to become strong enough to become reliable to his species. He accomplished his goals and became one of the most respected of the dragons as he became the guard for the races two leader dragons. When it comes to his bond with summoners he relies on them as much as they do him and thus does his best to make certain they're safe when going to battle for them.

Appearance: A very tough dragon that stands at 8 meters in length and 8 meters in height with a wingspan of 15 meters. His years of flight and running has helped to develop his body into a more tougher form with the usual red scales that shine brightly in the sunlight. 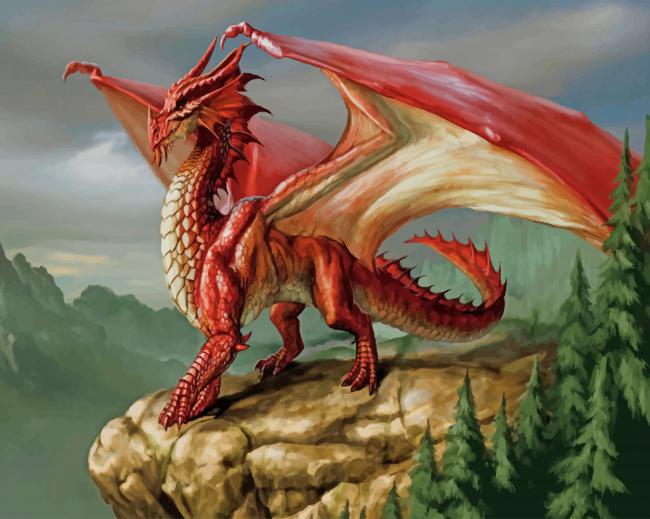 Personality: Is a very prideful dragon that loves to hang out with Baldur and show him who the top dragon is between the two. Is often more lenient to obeying his leaders as they are the most powerful but does everything he can to train and one day surpass them. To other dragons he loves competition and proving his abilities against theirs.
Backstory: Growing up Alduin wanted to become the strongest dragon of his race. He trained against the odds, due to being one of the smaller dragons, for years and eventually earned his way up the ranks as he became second in strength to Eldwyn. When it comes to his relationship with summoners he actually looks down upon humans as he doesn't like seeing weakness in things and has the belief that humans are more full of weaknesses and contradictions than any other living creature. That doesn't mean he won't help a human in need especially one that summons him.

Appearance: A large dragon, the tough red scales of her hide powerful in density, as she stand on four legs at 25 meters in length and 25 in height with a massive wingspan of 45 meters. 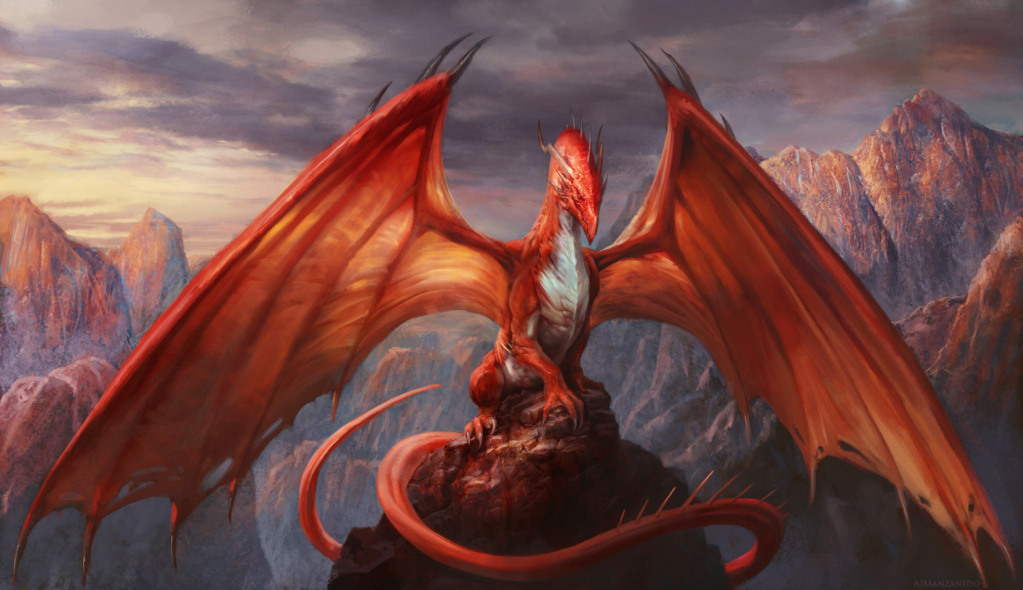 Personality: The other bodyguard of the two top dragons, Midgardsormr and Dalamud, that works together with Eldwyn in protecting the two with her life. Though she is much bigger than Eldwyn she has high respect for him as well as all of her kin as well as those who summon her. She is very calm and collected as well as intelligent enough to sense danger from afar. Is also very caring and shows no hesitation when it comes to healing those that are hurt whether they be dragon, human, or otherwise.
Backstory: Is the direct daughter of Midgardsormr and Dalamud as well as the mother of Ferndelle and Sepher. She was born powerful but didn't let that get in the way of her attitude towards others that proved weaker than her. In fact she wanted to further develop her abilities to be better able to look out for them with her powerful offensive and defensive jutsu skills. She is very respectful and loyal to those that summon her and has no problem allowing a human(s) to ride along her body and fight for them with all her power as necessary.

Appearance: Is a powerful yet smaller dragon that is the only dragon that doesn't have four legs as he uses his wings as his anterior support. He stands at 15 meters in length and height with a wingspan of 30 meters and has highly developed muscles in his wings due to his centuries of flying. 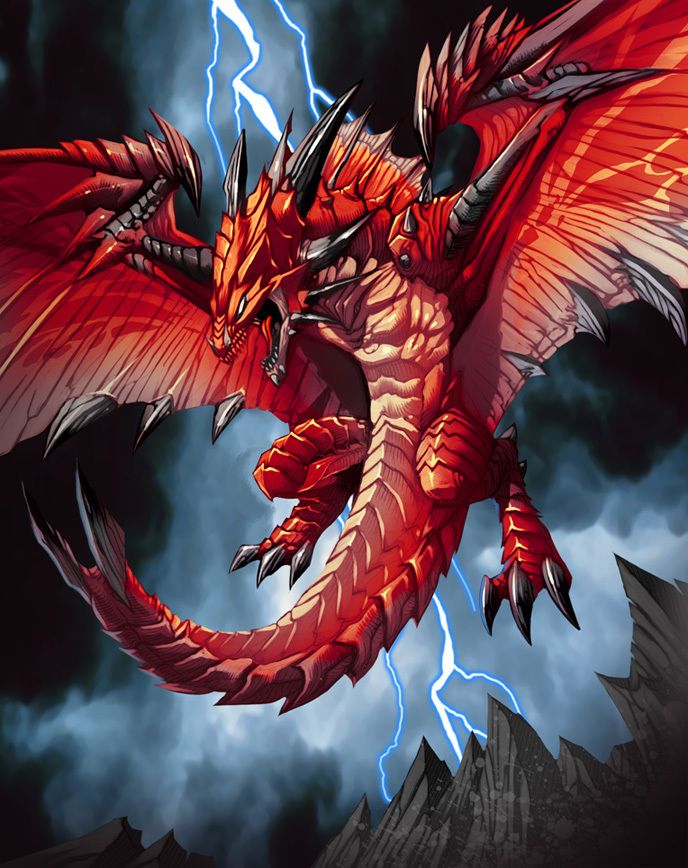 Personality: A very loyal dragon that bears a striking resemblance in personality to Dash yet is much more mature and thus knows the value of patience and timing. Is the fastest of all the dragons yet doesn't let his knowledge of that get in the way of his duties and responsibilities.
Backstory: A dragon that loved going fast growing up and developed his disciplines in speed rather than in other attributes. Because of his speedy movement the head dragons decided to make him their messenger as he could cover miles upon miles of distance in a short period of time. Due to this job set upon him he has grown faster and is often relied on by his summoners to cover vast distances of the world while riding upon his back.

Appearance: A powerful dragon that stands as the largest of them all at 40 meters in length and height with a massive wingspan of 60 meters. The immense amount of power within his body churns constantly causing his scales to glow brightly as though preparing to unleash a massive deluge of fire. Due to his massive understanding of Space and Time his eyes are different from all other dragons as they shine black as though they are part of the universe and can see past the stars and into the future. 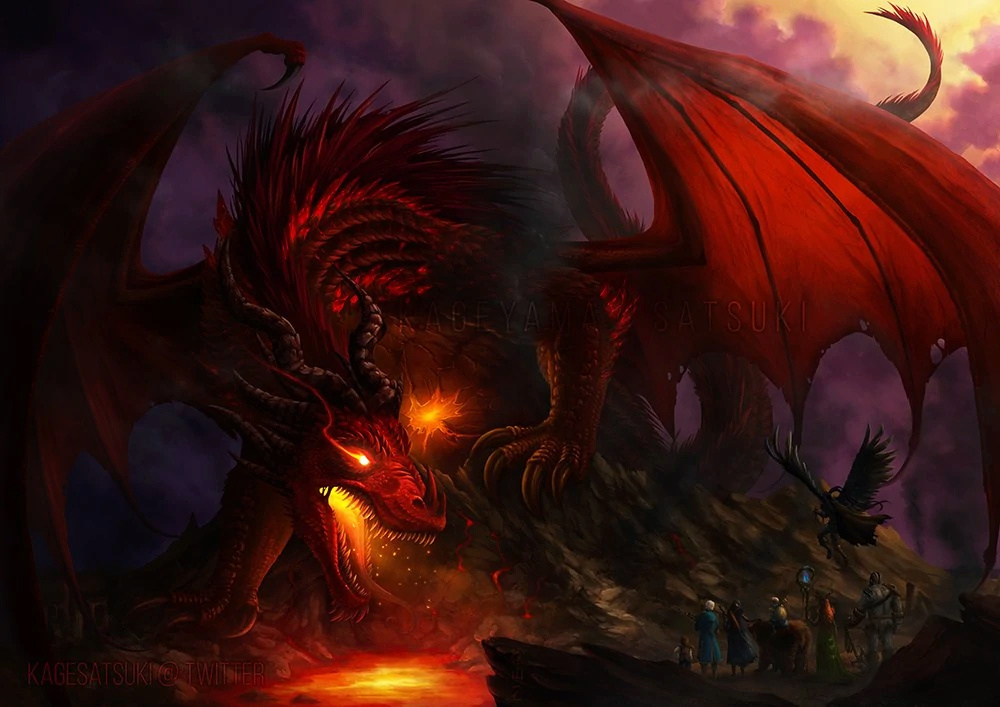 Personality: Is the eldest and most proud of the dragons yet doesn't bear an ego that would showcase his pride. Being that he knows he bears an unassailable amount of responsibility when watching over his kin as he doesn't want them to go rampant and cause the world of humans the distress they used to millions of years ago. Even though he bears this responsibility he doesn't see it as a burden as he has a profound sense of calm and trust in all who would call him king.
Backstory: King of the dragons; husband to Dalamud. Has been alive for thousands of centuries and has gained immense wisdom in all that time. With his experience he is often came to for guidance and is always happy to help those in need of his wisdom as well as his power. This extends to summoners as well as he has learned that dragons did a lot to humans back in the past and he wants to make up for it by showing that dragons can be allies to humans and trusted among them someday.

Appearance: Is a dragon that stands at 30 meters in length and height with a wingspan of 50 meters. Bears tough scales and powerful wings and claws that shine brightly in both sun and moonlight. 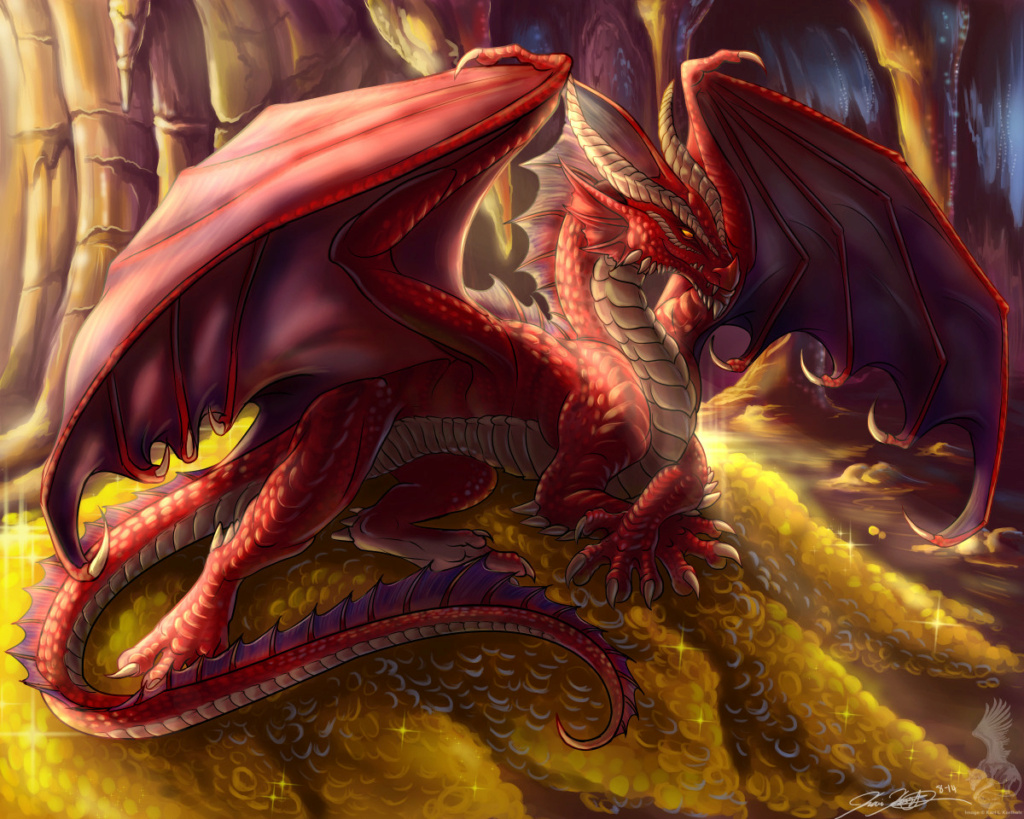 Personality: Among all the dragons she is the most caring as she bears the responsibility of protecting the dragons that serve her and nurturing them when they're wounded. This trait of hers carries over when she's with humans and her summoner as she will do everything in her power to make certain they stay in tip top condition all while fighting against those who would try to hurt them.
Backstory: The queen of the dragons; wife to Midgardsormr. Upon marrying her husband she started seeing all dragons as members of her family. She sees all dragons as her children and displays deep affection towards all who come before her looking for her boon as queen. Along with this she sees any summoner brave enough to make a contract with her race as her children as well and will fight as hard as is needed of her to protect them from all harm.

Re: The High Table of Dragons