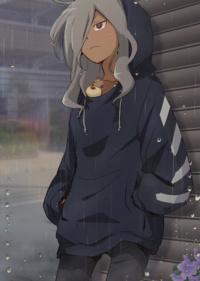 Name: Smoke Bomb: Catalyze
Element: --
Rank: C/B/A/S
Specialty: Weaponry
Particular Jutsu Type: --
Backstory: Necessity is the mother of invention. No one knows what talentless being made this technique, but one could say that lack of talent with Ninjutsu and desperate ingenuity was a talent all its own.

The user empowers a smoke bomb with their chakra before throwing it. Upon collision or detonation the smoke bomb bursts, the chemical reaction excited by the chakra infusion increasing the range noticeably. A smoke cloud bursts from the point of impact at jutsu speed out to form a circle with jutsu range for radius and lasts up to the jutsu's duration in posts. The chakra infusion causes the smoke cloud to be rich in the user's chakra, causing techniques or skills to detect the user using their chakra to fail unless they can overcome the power of this technique. The user's own techniques and skills for sensing other's chakra are completely uninhibited by this effect. While the smoke cloud remains mundane vision is lowered to a range of one meter for anyone inside of the cloud.

Wind based techniques that overcome this techniques power can disperse any part of the smoke cloud it makes contact with. The smoke bombs retain any additional properties they had before this jutsu. I.E if they had poison the closed would retain that effect.

If the user has the sensory spec then they can sense anything within the smoke cloud.

This looks great, thanks for being patient with me and the trial staff during this time.